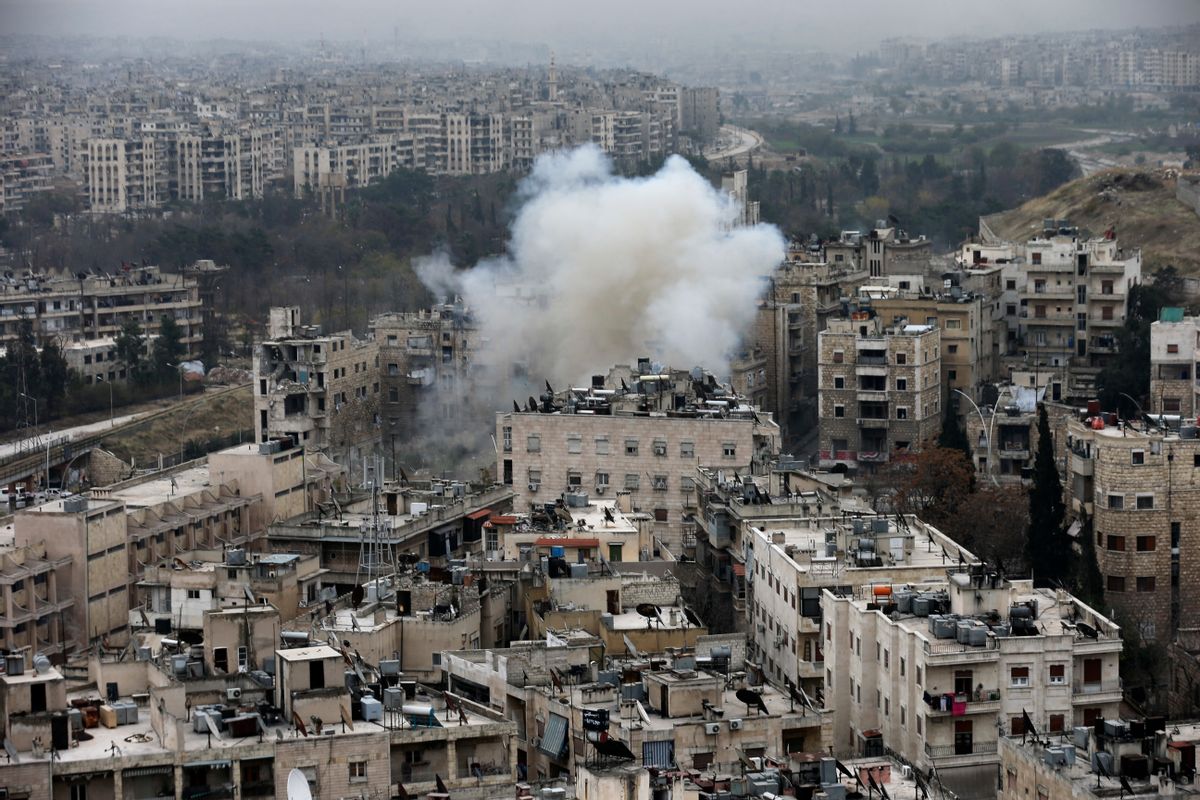 The U.S. cruise missile attack on a Syrian air base, in retaliation for what the White House said was a deadly nerve agent attack carried out by the Syrian government, proved to be a rare moment of glory in Donald Trump’s embattled presidency. The president basked in praise from usually critical Democrats and news organizations.

Yet behind the scenes, U.S. military and intelligence officials doubted that the Syrians had used chemical weapons, according to investigative reporter Seymour Hersh.

Trump was “warned by the U.S. intelligence community that it had found no evidence that the Syrians had used a chemical weapon,” Hersh writes on the German news site Die Welt.

"Some American military and intelligence officials were especially distressed by the president's determination to ignore the evidence. 'None of this makes any sense,' one officer told colleagues upon learning of the decision to bomb. 'We KNOW that there was no chemical attack . . . the Russians are furious. Claiming we have the real intel and know the truth . . . I guess it didn't matter whether we elected Clinton or Trump.'"

The source for much of Hersh’s story is anonymous. He is described as “a senior adviser to the American intelligence community, who has served in senior positions in the Defense Department and Central Intelligence Agency.”

The source’s description of divisions within Trump’s national security advisers conflicts with previous news accounts that depicted the president and his military and intelligence advisers as united in the belief that Syrian forces had used sarin gas, which is banned under international law.

"U.S. intelligence agencies quickly identified the source of the attack and the chemical agent used," reported USA Today. "'That confidence level has just continued to grow in the hours and days since the attack,' national security adviser H.R. McMaster said."

If accurate, Hersh’s article renews doubts about the attack first raised by MIT professor Theodore Postol. In a series of blog posts about video from the scene of the attack, Postol argued that the Syrian town of Khan Sheikhoun had suffered conventional, not chemical, attack.

Hersh cites transcripts of a U.S.-Russian “deconfliction” communications channel that he says shows the alleged chemical attack was actually a conventional attack on a warehouse used by al-Qaeda militants. Following standard procedures, the Russians notified the U.S. in advance of the planned Syrian attack and the U.S. commanders had no objection, Hersh reports.

The victims seen on social media were actually suffering from the effects of breathing in chemicals dispersed into the air by the bombing of the al-Qaeda warehouse, according to Hersh:

"A Bomb Damage Assessment (BDA) by the U.S. military later determined that the heat and force of the 500-pound Syrian bomb triggered a series of secondary explosions that could have generated a huge toxic cloud that began to spread over the town, formed by the release of the fertilizers, disinfectants and other goods stored in the basement, its effect magnified by the dense morning air, which trapped the fumes close to the ground."

A team from the doctor’s group Médecins Sans Frontières treated victims from Khan Sheikhoun and reported that “eight patients showed symptoms — including constricted pupils, muscle spasms and involuntary defecation — which are consistent with exposure to a neurotoxic agent such as sarin gas or similar compounds.”

Hersh's claim that chemical weapons were not used in the attack conflicts with the findings of the Organization for the Prohibition of Chemical Weapons (OPCW) and the French government.

An OPCW report dated May 19 analyzed samples from the site. Signs of sarin or sarin-like substances were detected in many samples, as well as sarin degradation products, and at least two samples that state sarin itself was detected, according to the OPCW.

The OPCW's fact-finding mission is seeking to visit Khan Sheikhoun as part of its investigation.

Hersh portrays Trump as determined to act in the absence of corroborating evidence that Assad had used sarin on his own people. Among the four policy options he was presented, Trump chose to bomb an airfield in Syria, but only after alerting the Russians (and through them, the Syrians) to avoid too many casualties.

On April 6, U.S. commanders fired 59 Tomahawk missiles at a Syrian base, a show of force Hersh depicts as meaningless:

“Most of the important personnel and operational fighter planes had been flown to nearby bases hours before the raid began. The two runways and parking places for aircraft, which had also been targeted, were repaired and back in operation within eight hours or so. All in all, it was little more than an expensive fireworks display.”

But the attack yielded political benefits for Trump. Speaking on CNN, Fareed Zakaria said, “I think Donald Trump became president of the United States.” A review of the top 100 American newspapers showed that 39 of them published editorials supporting the bombing in its aftermath, including the New York Times, Washington Post and Wall Street Journal.

“'The Salafists and jihadists got everything they wanted out of their hyped-up Syrian nerve gas ploy,' the senior adviser to the U.S. intelligence community told me, referring to the flareup of tensions between Syria, Russia and America. 'The issue is, what if there’s another false flag sarin attack credited to hated Syria? Trump has upped the ante and painted himself into a corner with his decision to bomb. And do not think these guys are not planning the next faked attack. Trump will have no choice but to bomb again, and harder. He’s incapable of saying he made a mistake.'”

But whether Hersh's anonymous source is right is still open to question.