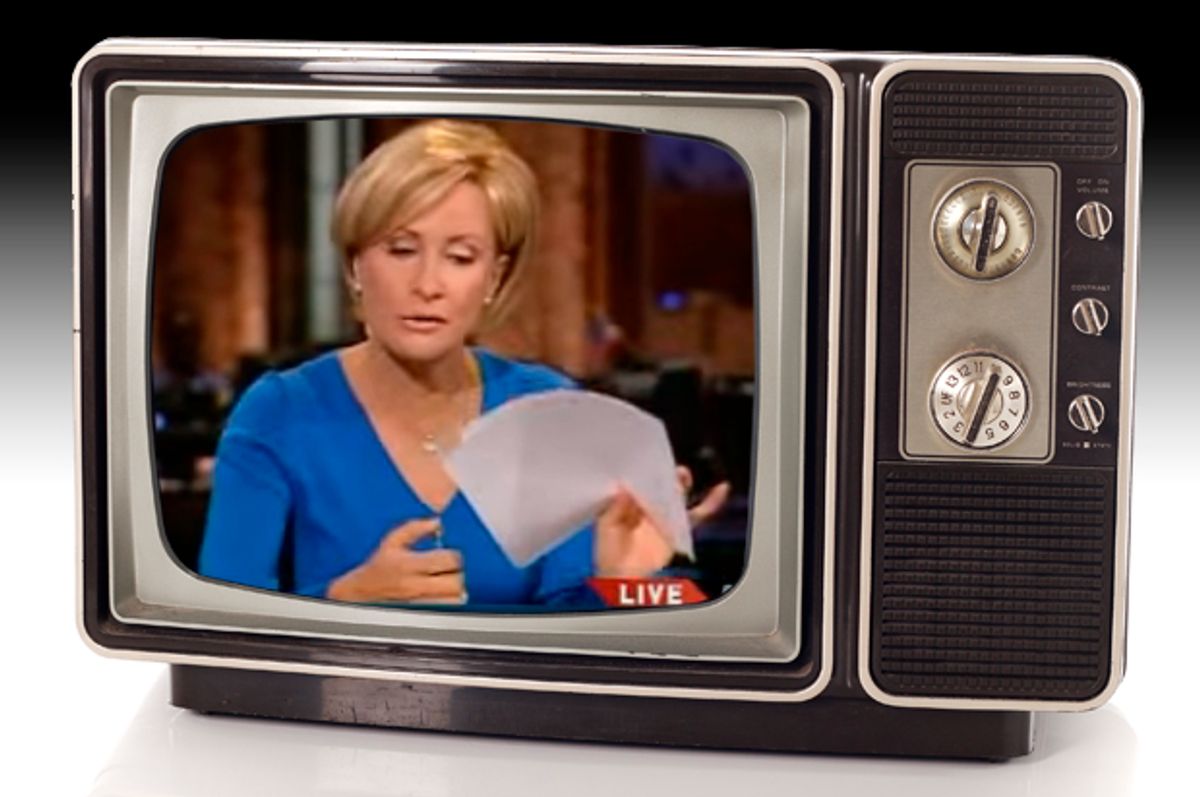 As you’ve no doubt heard, this week the president of the United States, Donald Trump, expressed his displeasure over the fact that MSNBC hosts Joe Scarborough and Mika Brzezinski frequently criticized him on their show “Morning Joe” that he launched a series of Twitter missiles at the prair, many of which —  as The Atlantic astutely points out) — were brazenly sexist.

Scarborough and Brzezinski responded by denying Trump's story, proved that he was at best incorrect about her alleged face-lift and added that high-ranking members of Team Trump had once tried to get them to scale back their negative coverage in return for squashing a negative story about them in the "National Enquirer."

This morning, Trump responded again in a tweet that was little better in character and tone than his earlier missives.

The presence of the "National Enquirer" in this debacle does bring to mind another once-infamous incident from Brzezinski's career — one that occurred exactly a decade ago this week.

When her higher-ups insisted that she cover celebutante Paris Hilton's release from jail instead of important political news, Brzezinski passionately, almost tearfully protested by declaring that "I hate it and I don't think it should be our lead" and eventually tearing up the script after attempting to light it on fire.

She later added, "I just don't believe in covering that story, at least not as the lead story on the newscast, when we have a day like today."

See the remarkable incident below:

The irony here — that a journalist who briefly became something of a folk hero for refusing to treat celebrity gossip as equivalent to real, hard news is now caught up in a beef with a “real” news figure who lives his life and manages our country as if he’s on a reality show — is inescapable. The fact that she’s responded to these insults, as many of our politicians now do, in the same entertainment-based way speaks to the fact that we’ve all been pulled into Trump’s particular way of thinking and acting.

And herein lies one of the deepest problems with Trump, one that goes far deeper than any ideological disagreement or even suspected illicit behavior. He is, if nothing else, a case study in the fact that character really does matter in American politics. Not even moral character, per se, but just a basic sense of propriety and human decency. More than that, the leader of the free world seems incapable of telling the difference between real news and fluff news — why understanding the details of a major health care bill is more important than nursing grudges against celebrities like Rosie O'Donnell, Alec Baldwin and Meryl Streep.

As the leader of our nation and the fulcrum on which the news cycle pivots, he’s pulling down the media — and, thus, ourselves — with him.

If nothing else, all this garners a newfound appreciation for the stodgy, out-of-touch Republican politicians who preceded him — the George W. Bushes and John McCains and Mitt Romneys of the world. Yes, you may have disagreed with them politically, but at least when it came to this basic ability to act like statesmen, they were up to snuff. Sure, they occasionally screwed up with a wayward joke or insensitive comment, but they quickly apologized and tried to go back to acting like adults.

I suspect that most Republicans, if they were willing to set their partisan biases, would admit that the same thing was true of Al Gore, John Kerry, Barack Obama and Hillary Clinton.

Yet this cannot be said of Donald Trump. And because this can't be said of him, we live in a world where the type of cotton candy news that Brzezinski tried to avoid has become inescapable. Our reality TV star president — of all the career fields he's been in, none were better suited to the president than reality TV — has taken his petty feuds and made them into topics of the utmost political import.

In a sense, Brzezinski got what she wanted 10 years ago. Having been relegated to the media properties best capable of handling it, celebrity news is no longer on the front page or at the top of the hour at more reputable outlets, MSNBC included. Alas, the “real news” she wanted a decade ago has become a caustic reality-TV spectacle in of itself, “Jersey Shore” with the fate of millions hanging in the balance.

The other day, my Uber driver was fiddling with the car radio when some Trump-related story came on the air. I have no idea what the story covered as he turned off the radio pretty much instantly after hearing Trump's name. He then asked me what I thought of the president. Instead of replying, I parried the question back to him. His reply:

"I feel like I'm watching a reality TV show. I can't even enjoy reality TV anymore, because it just reminds me of politics."