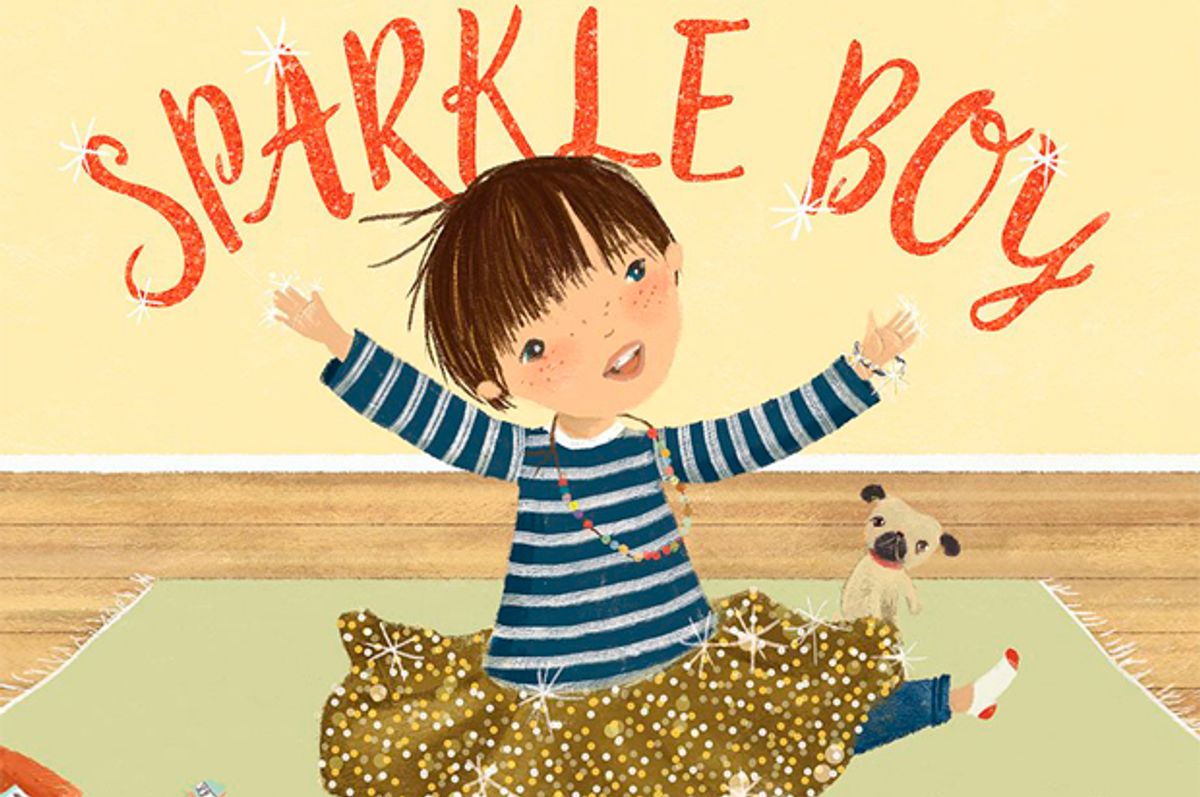 It's been nearly three decades since Lesléa Newman's pioneering children's book, "Heather Has Two Mommies," was released. Since then, a lot has changed — plenty of it for the better — for LGBTQ parents and children. Newman, meanwhile, has continued to publish dozens of acclaimed books for both adults and children. But the fight for representation, for tender, warm, relatable stories continues. Now,  Newman has a new children's book, "Sparkle Boy." Illustrated by Maria Mola, it tells the story of young Casey, who, like his big sister Jessie, adores "all things shimmery, glittery, and sparkly." Casey's tastes inspire a variety of responses from the people in his life, but it's Jessie's transforming journey that serves as the central thread of the tale.

Salon spoke recently to Newman about her work, and about her message to sparkle boys and girls everywhere.

What made you want to look at these issues about gender roles in a children’s book?

I have two answers to that question. The first is that I’m a writer, and every morning, I wait for three drops of blood to appear on my forehead, and write whatever comes out of my pen. It’s not as strategized as one might think. I look at any piece of writing that comes my way is a gift. My mentor Allen Ginsberg always said that writing was 33 percent each of inspiration, perspiration, and respiration. I said, “What’s the 1 percent?” He said, “Magic.”

So there’s magic. The second thing, the more conscious answer is that this is my community. These are my peeps. These are the issues that are close to my heart. I know many, many Sparkle Boys of all ages. I feel like my job as a writer is to be a voice to the voiceless, to make the world a better place, to practice tikkun olam, which is to heal the world, a responsibility given to every Jew at birth. The way I heal the world or try to do my part in that, because nobody’s expected to do that by themselves, is through creating literature that makes the world a safer place, especially for children.

I really admire the ability of children’s book authors to tell complicated stories with such economy. You don’t come to a conclusion about Casey's gender identity. You don’t tie it up with a bow. It’s really more about expression.

There’s a quote from Eddie Izzard that I really always love and I think about a lot, which is, he says, "They’re not women’s clothes. They’re my clothes. I bought them."

Well, my favorite line in the book is when the mom says, “Casey looks like Casey.”

Well, what’s the first question a pregnant woman is asked? Is it a boy or a girl?

You still, many, many times will go into a store saying, “I need a baby gift.” The first question is, “Is it a boy or a girl?” as opposed to, “What would you like to see? Do you want a book? Do you want a piece of clothing? Do you want a toy?”

It’s just ridiculous that if you look at a skirt, it’s a piece of material. It doesn’t have a gender. I love that very famous picture that’s been circulating online of FDR in a very frilly dress. This picture blows people’s mind because it’s not FDR in drag, it’s FDR in clothing that boys were dressed in during the time of his childhood.

It’s an incredibly frilly dress. He has long curly hair. He has this fantastic hat. He has patent leather Mary Jane shoes and frilly socks. The way boys and girls are traditionally dressed now is not the way it’s always been.

Pink, actually, used to be for boys. It was considered a stronger color. You look at the Virgin Mary, who wore blue. Alice in Wonderland wore blue. "The Wizard of Oz’s" Dorothy, wore blue. These are not fixed, static standards. They change all the time.

What we’re trying to do now is just blow them out of the water and just create a world where children and adults are free to be whoever they want to be.

Sparkle or glitter are not inherently female. There’s no reason for it to be. Putting color on your nails — it’s not in our DNA that that’s something that females do.

I remember when Chaz Bono was transitioning; Cher gave this interview that I found very poignant. She said that as Chaz was transitioning, she heard a voicemail from Chastity. She had to grieve for that, as well as embrace her son. That’s part of the journey as well. That’s part of the process. It doesn’t mean she doesn’t love Chaz, and it doesn’t mean she isn’t thoroughly happy that Chaz is living his life as he was always meant to do. It meant that she as a mother had to reckon with saying goodbye to someone she had known.

When I came out to my parents, I had gone through my own process to figure it out. When I told them, or when you tell anyone who’s a little unsuspecting, that’s the beginning of their journey. I had to let them go to their journey, saying goodbye to their expectations of who I was going to be, which in their minds was going to be very traditional, growing up, marrying a man, and having kids. I needed to allow them their space, to get over the feelings they had about that and then move on to embrace who I am.

It’s important that you addressed that in the book because as loving and supportive as allies can be, sometimes, there is that moment of, “Oh, I thought you were this.” Then, I need to just take a beat to understand that, “No, actually, you’re this.”

Even though Jessie and Casey are surrounded by very loving, accepting adults, somewhere, Jessie has gotten this message that skirts, and nail polish, and glittery bracelets are just for girls. It’s very pervasive in our whole culture. She has to take all these messages that she’s getting, and somehow sort this out, and figure out what’s true for her.

With the boys the children meet in the library, there is this very strong message that boys and girls are given from a very early age that things that are feminine are not as good.

The boys . . . it’s interesting because people have called them bullies. In some ways, they laugh at Casey. That’s true. But then, one of them is really almost trying to be kind, and he says, “Dude, you can’t go around like this. People will laugh at you.” So he’s almost taking him under his wing and trying to explain the world to him.

What do you hope this book achieves? What’s been the reaction to it thus far?

Well, I’ve been really surprised that many adults that have seen it have really been brought to tears by it. I never expected that kind of response.

I think that it really has touched people on a pretty deep level. Even though, obviously, it’s a children’s book, I think it’s also a book for children of all ages because even grown-up Sparkle Boys didn’t grow up with a book like this, right? It captured something very deep within them. My hope for the book is that it will be a one piece in the process of making the world a safer place for all of us, and helping people accept, respect and celebrate everyone. I avoid the word tolerance because, to me, tolerating something is just distasteful to use. I’m not into having people tolerate one another. I’m into acceptance, respect and celebration.

This book is isn’t saying who Casey is. It’s not putting a label on him. For a lot of kids and parents, it is just about giving each other space to explore, giving each other space to play, giving our kids room to say, “I want to try different things on. I want to see what makes me happy.” I do feel that the generation coming up has a greater understanding of those distinctions and those subtleties.

Oh, I agree. I have great hope for the future. That’s why I hang around with kids.