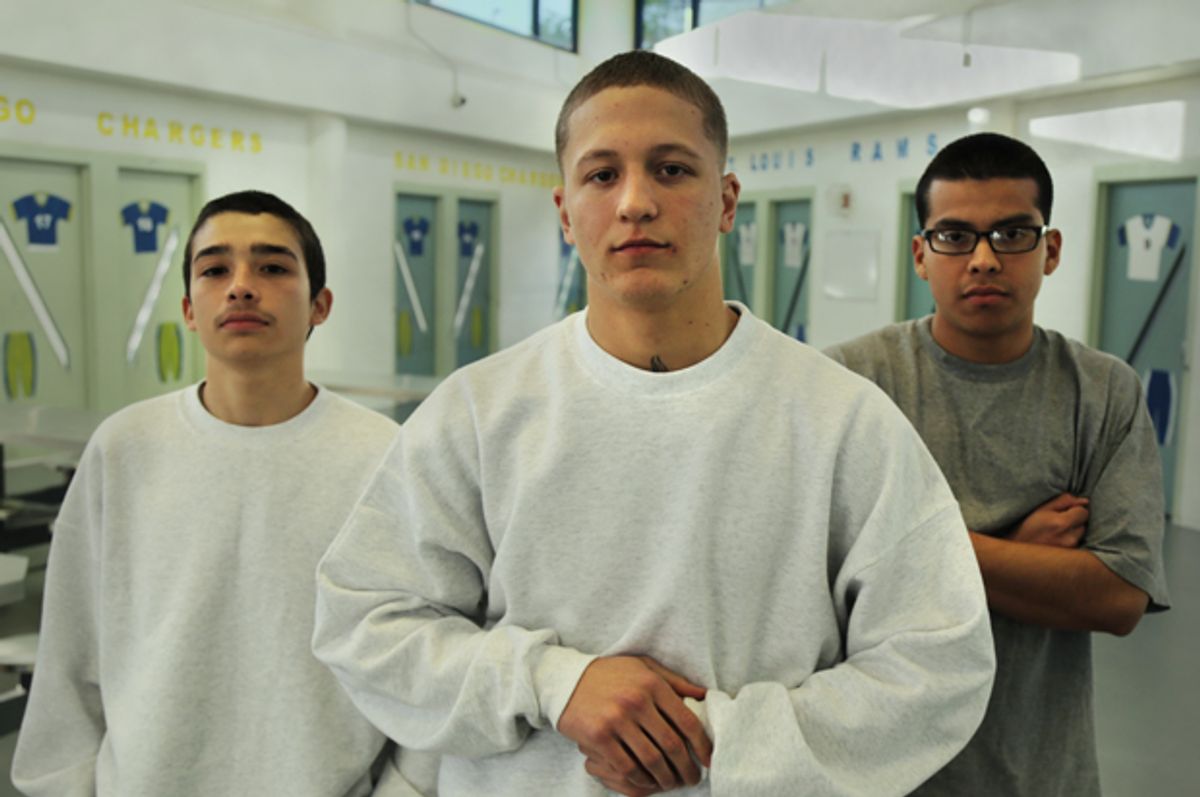 They Call Us Monsters (BMP Films)
--

Juan Gamez has close-cropped, black hair and a baby face that remains expressionless except when he smiles. As a 16-year-old boy facing 90 years to life for first-degree murder, he seems to float somewhere above or below this fact, as do Antonio Hernandez and Jarad Nava, the other teenage boys awaiting similar sentences in Ben Lear’s moving documentary, “They Call Us Monsters,” a film that connects a 20-week screenwriting class inside Sylmar, a segregated unit for juveniles being tried as adults, with the passing of SB 260, legislation that grants youth serving life sentences the possibility of parole.

At the start of the film, we watch as Juan, under surveillance, speaks on the phone with a girl. Without affect, the girl asks if he’s in a detention center. His answer — “Yes, but inside the jail is another jail” — articulates the Sartre-esqe morass of life inside a broken system, as do the ubiquitous signs on the walls that read "NO! TALKING" while everyone blathers on regardless.

Over the course of the two years that Lear (son of TV writer and producer Norman Lear) spent filming “They Call Us Monsters,” SB 260, the juvenile parole bill, went into effect in California. Meanwhile, the boys wrote a screenplay, which their teacher, Gabriel Cowan, shot and edited into a 15-minute short, “Los.” The film-within-a-film structure of “They Call Us Monsters” replicates the repetitive nature of these very systemic contradictions that the boys face and endure, but in a way that allows for reflection as well as an understanding of the need for continued awareness and advocacy.

“Los” ends up being, of all things, a love story. Its protagonist, an amalgam of Jarad, Antonio and Juan, is played by a small and fresh-faced boy, a perfect casting choice that conveys the boys’ actual youth, that is, if it hadn’t been cut short by gang violence, poverty, and an unjust system.

“You cannot punish trauma out of somebody. You have to love it out of them,” Cowan says. “The juvenile justice system was created to rehabilitate, not to be punitive but it became a punitive system where the kids are getting punished for their trauma.”

Cowan, who also happens to be one of the film’s producers, is the first person to teach a screenwriting class with InsideOUT Writers, a non-profit organization whose mission is both to use creative writing as a catalyst for personal transformation and to reduce the juvenile recidivism rate by providing services for formerly incarcerated youth.

The focus of InsideOUT is usually poetry and prose (alumni participate in group gatherings called Writing Circles, where young people come together to share their work and talk). Cowan conceptualized the idea to teach screenwriting and then produce and shoot a movie from the script the kids wrote. He approached fellow InsideOUT board member and founder of The Anti-Recidivism Coalition, Scott Budnick (“The Hangover”) who executive produced the “They Call Us Monsters” as a labor of love.

“A producer took me to juvenile hall. I saw the kids facing life and it broke my heart and changed my life,” Budnick tells me over the phone. Still a teacher for InsideOUT, he has abandoned the Hollywood bromance in favor of Good Films, his new feature-film company whose mission is to tell stories with racial and social-justice themes. “When you see these young, smart kids without resources, being taken advantage of in this way and locked up for life with no help, I call bullshit on that right away. Who you are as a teenager is not who you are when you grow up.”

The protagonist of “Los” emanates vulnerability where the boys act tough and make jokes as a form of self-protection. At times Jarad, who faces 200 years for four attempted murders, demonstrates an almost dissociative denial that borders on sociopathic. Antonio, 14, is the most studious. Juan mostly appears contemplative, or maybe just catatonic. His statement, “I was a monster, I really was,” is the crux of the film: he joined a gang before his thirteenth birthday to emulate his brother. Even if he appears “remorseless,” there seems to be a softness there, or maybe just a deep need for approval. In other words, he’s a boy. There’s not only capacity for change, there’s also that oft-forgotten glimmer of a thing called hope.

It’s this capacity for change that, according to Budnick, Cowan, Lear and other prison-reform policy advocates, differentiates the young person from the adult. As any parent, teacher or person who has worked with teens will tell you, teenagers are impulsive. In fact, since the human brain isn’t fully developed until the age of 25, teens are less likely to understand risk and consequences, less able to resist peer pressure, which is relevant in deciding the level of sentence to impose for a crime one commits at, say, 15. (SB 260 calls this “diminished culpability.”)

When the new law went into effect in January of 2014, it established a new parole process to be enacted on either the 15th, 20th or 25th year of incarceration, depending on the sentence or controlling offense for people who were under the age of 18 when they committed a crime and who had been tried and sentenced as adults. Though not everyone would be lucky enough to benefit from this process — a whole other story — some people who were serving life sentences for offenses they had committed as youths suddenly found themselves eligible for release.

“I’m a believer in the parole process,” Lear says. “You have to turn your life around to get parole. Also, people who have done enough time in prison age out of violent crime in their thirties and forties. Of course, aging out of crime and violence can also be offset by a prison culture that doesn’t allow you to change. That’s why you need programs like InsideOUT and college.”

In the fifth writing class, Cowan introduces the topic of character motivation, telling the kids that conflict and fear are essential in driving plot. He asks them to write down five things they fear. Jarad makes a joke of it, but Antonio says, “Trust, fear of vulnerability, fear of public speaking and fear of being alone.” Juan says, “Fear of death, loneliness, darkness and love.”

“The love story is the heart of the film,” Lear says. “If they hadn’t wanted to write a love story, there wouldn’t be this film, but they decided to write a film, their film, about a young boy falling in love, when they could have written about violence or gangs. That say’s a lot.”

The girl in “Los” turns out to be Abby, the love of Juan’s life whom he let get away. Juan tells Cowan and his classmates how he was going to give the real Abby a poem but he never got the chance. In what is then the pinnacle moment of the documentary, Juan watches from the sidelines as actors brought in by Cowan enact a scene from his own life as he wishes it had actually transpired. His face during this moment, the flicker of anguish and regret, is full of pathos. Later, he calls Abby and uses “Los” as a script to narrate the depth of his feelings. Even the JC, listening on the other end of the line, is visibly moved.

Obviously, there are no easy answers. Love does not conquer all nor is Lear suggesting this. The teenage girl Jarad shot is paralyzed and in a wheelchair. She weeps as she talks about the harrowing moment in which she thought she was going to die. In other words, Lear does not gloss over what Jarad actually did to end up at Sylmar, yet the film questions both his draconian punishment and the way the system continually punishes low-income, mostly African-American and Latinx kids with lengthy sentences, regardless of the fact that, as adolescents, they have no ability to see beyond the orbit of their own experience.

Toward the end of “They Call Us Monsters,” Antonio has been released. He receives a letter from Jarad. Sitting in his white undershirt, he tries to reconcile the number of years Jarad still has left on his sentence: 162. Moved by his friend’s predicament, he says that he wants to become successful for him. He references the movie “Avatar,” and says, “I feel like I gotta be these huge blue people for them so at night when they dream of stuff they could be doing, I could be one of those huge, blue people.”

Jarad and Juan are currently serving the remainder of their sentence at Ironwood state prison. Jarad, who will be eligible for parole in 2037, wrote in a letter to PBS that he’s “chosen to leave the criminal lifestyle in my past and serve my Lord and Savior Jesus Christ.” Juan is eligible for parole in 2027. He wrote that he is “grateful so many people have embrace[d] our story and join the prison reform movement.” While in prison, he is going to college fulltime and making strong grades. Antonio has since re-offended. All three boys have children.

SB 260 may have finally passed in California, as well as Prop 57, but most states still impose juvenile life sentences with no chance of parole. This reality recalls a moment from the beginning of the film when the boys are taking Cowan on a tour of the facilities at Sylmar, clean but stark if decorated with names of NFL teams. They show Cowan a chair in a cell and Antonio says, “King George sat here,” and Juan laughs and makes a fart joke. Next, Jarad sings a lyric from “Hotel California” that again captures the “No Exit” quality of the whole story: “You can check out any time you like, but you can never leave.”

“They Call Us Monsters” aired on PBS in the spring. It is available for streaming on both Netflix and iTunes.