"The Defiant Ones": Two hip-hop legends made human at long last

HBO's miniseries about the rise of Jimmy Iovine and Dr. Dre exemplifies the impossible ideal of American will 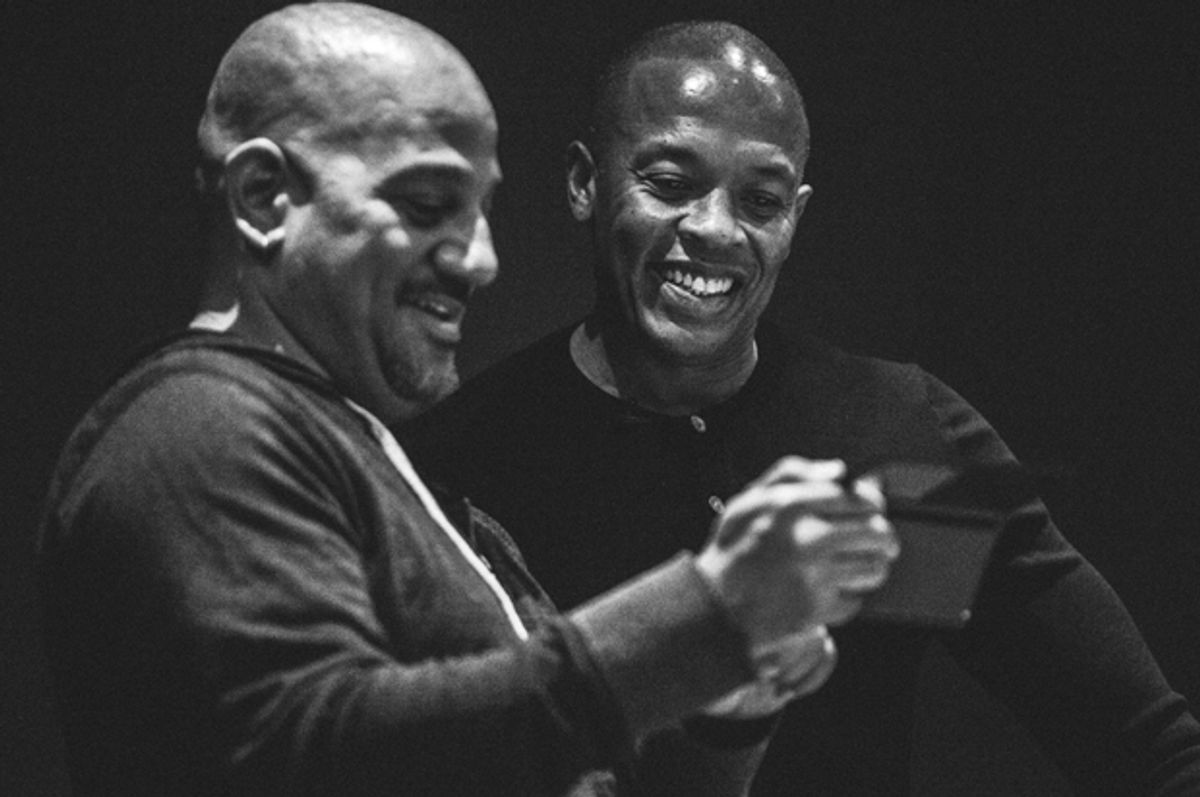 “The Defiant Ones,” though consistently enthralling, doesn’t truly alchemize until Part 3, which airs on Tuesday night. Around 24 minutes and 25 seconds in, super producer Jimmy Iovine recalls the moment when Death Row Records partners Dr. Dre and Suge Knight came into his offices at Interscope to play “The Chronic” for the assembled executives.

By that point in the four-part series — airing over consecutive nights on HBO starting Sunday at 9 — director Allen Hughes (who created "Menace II Society" and other films with his brother, Albert) already has the viewer locked in a groove. Drawing inspiration from the rock icons and hip-hop legends he has already featured, Hughes makes the separate stories of two music industry greats into an emotionally rich and visually lustrous affair.

It’s at that moment, commencing with a tight shot of a record player arm dropping onto gleaming wax, the needle glinting for an instant, that the film conveys the sense of the world shifting. That session birthed a partnership and friendship that stands to this day and would eventually transform Iovine and Dre into billionaires.

After entwining the fates of Iovine’s Interscope with Dre and Knight’s Death Row, Snoop Dogg became a household name. Others would follow: Tupac Shakur and Eminem. And then Iovine and Dre would change the act of listening to music itself in creating Beats Electronics, a company that has likely made them more money than any of their fully musical ventures.

Hughes has accomplished in “The Defiant Ones” something only a few filmmakers seeking to capture the pulsing core of pop music have been able to do: deliver a work of education and appreciation while showing one of the crucial junctures where the bloodstreams of rock and hip-hop history merge.

As hyperbolic as that may sound, it also makes sense if you know the résumés of Iovine and Dre. The roster of artists giving interviews on each man at some point in “The Defiant Ones” reads like a confirmation list for Grammy night: Snoop, Tom Petty, Sean Puffy Combs, Gwen Stefani, Nas, Bono, Trent Reznor, Patti Smith, Stevie Nicks, and naturally Dre’s partners in N.W.A., including DJ Yella, MC Ren and Ice Cube.

“The Defiant Ones” carefully walks through the biographies of these two men who outwardly seem as though they’d be as different as their respective hometowns of New York and Los Angeles. But Hughes works backward from their convergence in business to create a beautiful mash-up of two seemingly disparate life stories, showing how alike they were long before they met.

Both men were the children of working-class parents. As children and young adults, both were fascinated by sound, thirsty to succeed and convinced that even their best wasn’t good enough. And both are seized by the urge to drive themselves and the people around them past all previous thresholds of possibility and expectation.

But Hughes earns the four-part, four-night weightiness of “The Defiant Ones” by making the story about many more lives than those of just Iovine and Dre. With the brash adventurousness of a DJ shuffling sounds between a pair of turntables, the series saunters through the staggered parallel tales of the rising New York rock scene of the '70s and '80s and the explosive launch of West Coast rap in the '80s and '90s.

All the while, Hughes holds a microscope to Iovine and Dre — separately and together — to reveal what artistic greatness looks like on a chemical level, exploring the process of changing the process of music by showing the emotional and psychological ingredients that go into passion, drive and ambition. The keenest and most telling moments aren’t produced by the words these men and the work's many illustrious interview subjects say, but the language of their silent facial expressions.

In allowing Hughes to capture his quiet thoughtfulness Dre, who admits he values his privacy, may be more open and vulnerable here than the average person is likely to ever see again. Iovine, meanwhile, is a man whose temper and energy lurks only slightly beneath the skin of his poker face.

Hughes doesn’t completely lionize these men. Throughout “The Defiant Ones” the artists interviewed talk about the ways Iovine would get under their skin or make demands of them — and the industry — that no one else had. In a revealing aside, Iovine explains that he loves the apex predatory prowess of bears, because they’re lethal on land and in water.

“God got that one really right,” he says.

Neither does Hughes gloss over the conflict between Ice Cube and the rest of N.W.A. that heated up to the point when, in January of 1991, Dre assaulted Dee Barnes, host of Fox TV rap series “Pump It Up.” Barnes, who also shares her insights about N.W.A. and JJ Fad, describes the assault in vivid detail.

Hughes films Dre uncomfortably squirming as a recording of news coverage of the event plays, after which he unequivocally admits fault and describes that period in his life as a period drowned in alcohol and depression.

“I have this dark cloud that follows me, and it’s going to be attached to me forever,” Dre says. “It’s a major blemish on who I am as a man.” Barnes, however, says her career opportunities dried up as a result of filing a civil suit over the assault.

“The Defiant Ones” flips and trades feelings like this, steeping the viewer in wonder and hooking into our empathy as Iovine, Dre and the people around them revisit the stories of their various conflicts, slips and tragedies. Hughes artfully maintains a sense of awe and tension that vibrates throughout every chapter.

And in capturing these stories not merely through words, but sound, visual style and feeling, “The Defiant Ones” brings audience into the rooms where greatness sparks, expands and is eventually realized.

In the series, Iovine explains why Dre, Snoop and the artists who came in their wake were able to rocket straight out of Compton and dominate the Billboard charts, changing culture along the way. They scare you, he says, but the music brings you in. In the way of all wise observations, that same truth applies to him and makes “The Defiant Ones” a spectacle that’s not to be missed.