Mark Zuckerberg shouldn't be president, but he should be listened to

He's not the right person for the job, but his willingness to embrace new ideas is exactly what America requires 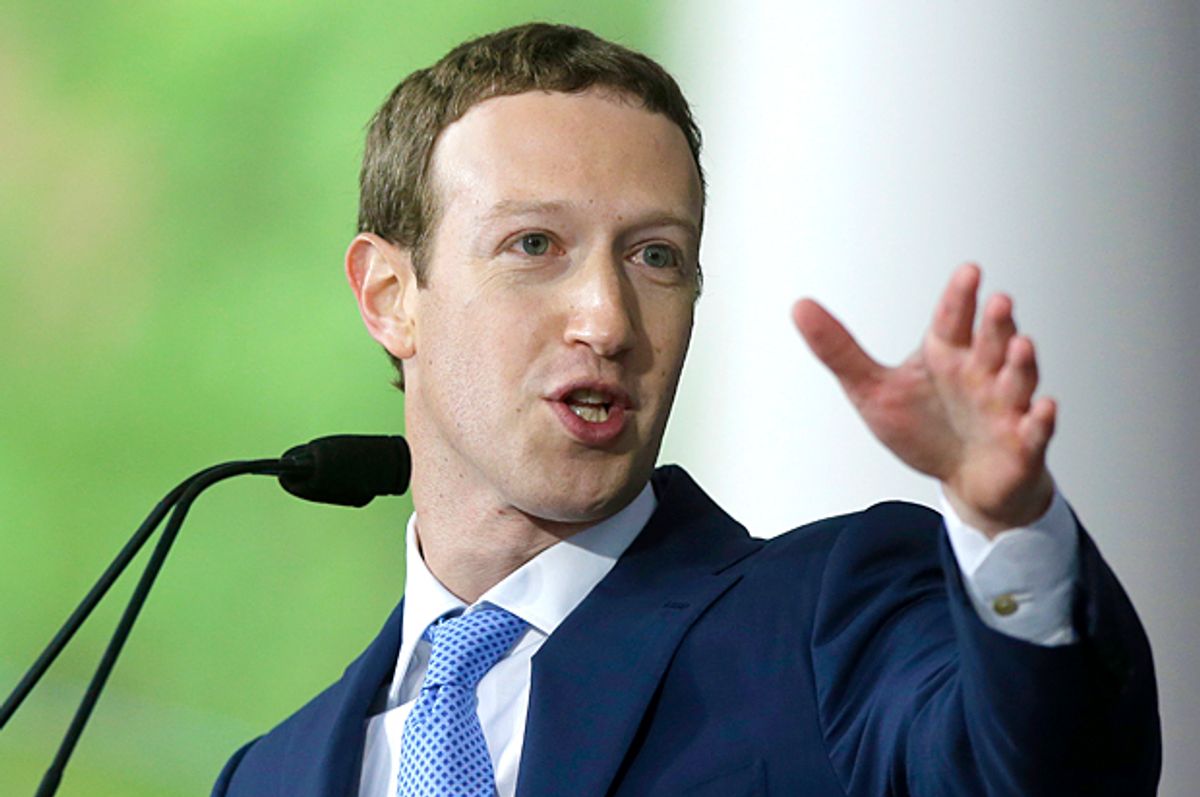 One thing must be emphasized at the outset: I'm not endorsing Mark Zuckerberg's rumored presidential ambitions (putting me in at least partial agreement with one of my colleagues). I would argue that Sen. Kamala Harris of California and Sen. Elizabeth Warren of Massachusetts have much stronger cases for their potential 2020 presidential candidacies than either Zuckerberg or any other name floated by the political chattering class.

Yet when Zuckerberg came out in favor of a universal basic income in May, it was oddly uplifting. At first I assumed this was because I share his enthusiasm for the idea (I supported Sen. Bernie Sanders of Vermont in the 2016 Democratic primaries), but as I worked on a recent article offering reading recommendations to potential 2020 presidential candidates, it occurred to me that there was another aspect to Zuckerberg's stance that I found inspiring: namely, the fact that it involves injecting new ideas into American politics at all.

No, a universal basic income isn't a new idea (public figures from conservative economist Milton Friedman to civil rights activist Martin Luther King Jr. supported versions of the concept). Rather, it's one it has been absent for so long from our political discourse that its mere introduction — if it managed to go mainstream — would be a massive game-changer. Indeed, the very concept of introducing new ideas to America's intellectual life was embedded in Zuckerberg's argumentation supporting a universal basic income.

As Zuckerberg himself put it, "We should explore ideas like universal basic income to make sure that everyone has a cushion to try new ideas."

This brings to mind one of the best modern historical books, "Atlantic Crossings" by Daniel T. Rodgers. In less than 700 pages, Rodgers demonstrates how many of America's most important progressive achievements in the late 19th and early 20th century came about because our intellectuals adopted a creative approach to policymaking. For the most part, this involved being inspired by and modifying ideas that had originated from European intellectuals. During President Franklin Roosevelt's New Deal in the 1930s, American intellectuals temporarily seized the initiative from Europe and became the primary originator of new ideas toward policymaking.

The common theme, however, is that when it came to addressing disparate problems ranging from providing social insurance and remedying urban housing shortcomings to economically assisting rural communities, America's greatest progress was made when its leaders were open to creative new approaches toward solving major social and economic problems.

This doesn't mean that the ideas always have to be good ones. In 1970, for instance, conservative columnist William F. Buckley Jr. famously proposed a solution to hunger (during an interview with "Playboy" magazine, no less) that entailed "giving out four basic food materials, free, to anybody who wants them" so that "you could officially and confidently say that the residual hunger in America was simply the result of people not knowing how to utilize these materials."

It didn't help that Buckley's case that the four foods he suggested  were "powdered skim milk, bulgur wheat, soybeans, and a kind of lard." At the same time, the fact that he was in good faith proposing any kind of creative new approach to the problem of eliminating hunger — even one that did not stand up to scrutiny — was encouraging.

It goes without saying that there's no requirement that these new ideas come from the left. "Dilbert" cartoonist Scott Adams, for instance, has emerged as a prominent and outspoken admirer of President Donald Trump, to the point that he referred to Salon as his "nemesis" after we published an article (authored by yours truly) ridiculing one of his choicer paeans to what he perceives as Trump's shrewdness.

Yet back in March, Adams wrote a blog post suggesting that new ideas be entered into the ongoing national debate about health care. His example of such an idea was creating a Healthcare Economic Zone, or an entity that would provide "free healthcare for everyone in the zone, paid by the healthcare industry itself" and "would be a test bed for new technologies and new systems. That means some extra risk for the patients, but not much."

Again, this is an idea that can be picked apart by health care experts. That said, the point here isn't whether or not the specific idea would work, but rather that Adams — like Buckley before him and Zuckerberg afterward — attempted in good faith to approach a major American policy problem with an idea that hadn't been part of the mainstream discourse before.

This is something that we need to see more of. One doesn't have to agree with a universal basic income or a healthcare economic zone or free bulgur wheat for the hungry — or, for that matter, to like Zuckerberg or Adams or Buckley — in order to support the spirit that caused them to try to infuse a spirit of innovation into our political culture. Whether it comes from the left or the right, an innovative approach might not only yield better policies, but would fortify the public's faith in its government at a time when such fortification is desperately needed.