Anonymity or accountability: Should trolls have to identify themselves before speaking out?

Why do internet trolls assume that their anonymity is sacred? 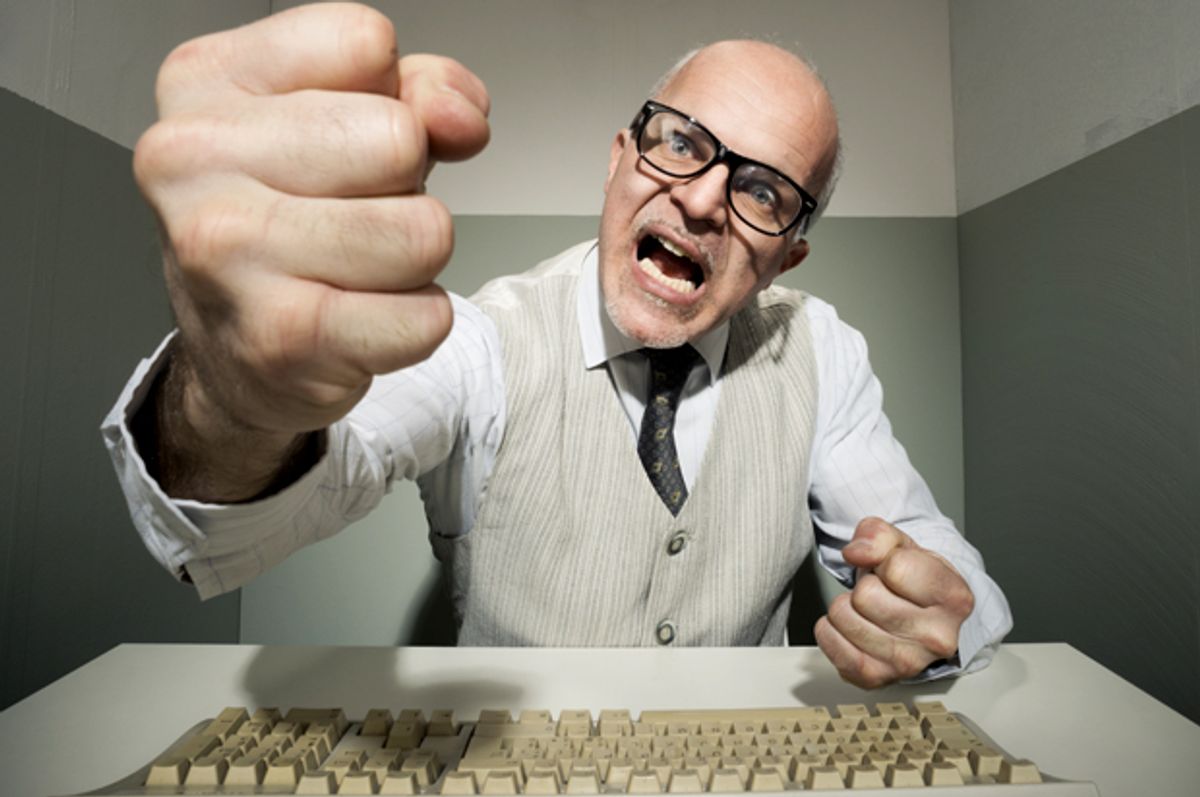 Why do internet trolls assume that their anonymity is sacred?

I'm not going to talk about whether or not there is a legal right to anonymity, which is a subject that others have discussed at length. Instead I'm going to address the assumption, which is prevalent throughout the trolling community and particularly among its far right elements, that there is something ethically defensible about anonymously posting heinous things online.

Hence the backlash against CNN last week. When the network discovered the identity of a man who had posted a video of Donald Trump inflicting violence against a wrestler with the CNN logo superimposed over his face — and found out that he had also posted a number of racist and anti-Semitic comments on Reddit — they decided not to publish his identifying information after he pleaded with them not to embarrass him.

This act, which was restrained only by their warning that if he posted similar content in the future that they would deem his identity to be newsworthy, has been characterized as a form of blackmail, or at least as an attempt by CNN to coerce an ideological opponent into silence.

Yet those arguments only hold up if you buy on faith that, when it comes to the quality of our public debate, anonymity is a prize to be valued above personal accountability.

It makes sense, of course, why members of the alt right would take that position. As University of Chicago law and philosophy professor Martha Nussbaum put it, anonymity is crucial to trolls because it allows them "to create for themselves a shame-free zone in which they can inflict shame on others." In order to have any kind of power in the public debate, they must able "to insulate their Internet selves from responsibility in the real world, while ensuring real-world consequences" for individuals they target.

This mindset has been in place for years before President Donald Trump rode it to the White House. Back in 2010, CNN spoke with a YouTuber who posted a number of anti-Islamic videos. When asked about why he refused to release his identity, he explained: "I don't think I would say this in open due to restrictions. I have a business and cannot afford to speak freely in our days of freedom of speech. Haha, what a big joke actually, if you think about it."

He added, "Political correctness is killing everything freedom stands for."

It's hardly surprising, given this attitude, that studies have found anonymous commenters are more likely to harbor contrarian or extreme views or lack civility in how they treat those with whom they disagree. It also causes what psychologist John Suler coined as the "online disinhibition effect," in which people abandon social constraints that might curb potentially embarrassing behavior once they can slough off their identity.

This, of course, explains not only why so many online political commenters want to express their views anonymously, but why they should be called out as cowards and bullies when they do so. There is an important difference between people who want to stay anonymous because their views are controversial and those who aim to do so because they want to use their speech to harm others with impunity.

The anonymous commenter who posted a video showing the president inflicting violence against a mainstream media outlet, and who posted comments that insulted people for being racial minorities or Jewish, didn't do so simply to express an opinion. His views were, by their very nature, intended to inflict psychological damage on individuals he had targeted.

It is one thing to argue that he had the legal right to do so. It is quite another to argue that doing so should be regarded as anything other than shameful.

The same argument should be extended to everyone who posts anonymous comments that are clearly intended to hurt other people. When they characterize the opposition to their statements as anti-free speech, they ignore that one can recognize another person's right to say something horrible while still demanding that they be held personally accountable for what they've said. Individuals who insist on being anonymous when they go out of their way to be hurtful, bigoted or offensive do so because they know that they could be shamed for doing so. As a result, they insist on being empowered to be taken seriously in the public dialogue while simultaneously demanding that they be spared all personal accountability for what they choose to contribute.

It is directly analogous to the mindset of a brawler who throws plenty of punches but insists it's wrong when their target is allowed to punch back.

For the record, I don't believe that the solution to this problem is widespread doxxing or legally compelling people to identify themselves. The ideal solution, I suspect, is cultural rather than a political or technological one. If someone posts an inflammatory comment but does not attach his or her name to it, that comment should be regarded as a non-entity.

I don't mean simply disregarding its content as asinine. I mean literally holding it as a principle that, if you want to be acknowledged in the debate, you need to include your real name, thereby accept real accountability for your opinions. Those who do should be granted at least a modicum of respect; those who do not should be ignored and, when possible, should have their comments deleted as both clutter and a waste of time.

Will that solve the problem of stupid trolling overnight? No, but it will at least firmly place them exactly where they belong in the public debate.