Republicans cynically offer Charlie Gard U.S. citizenship to get the health care they won't give to others 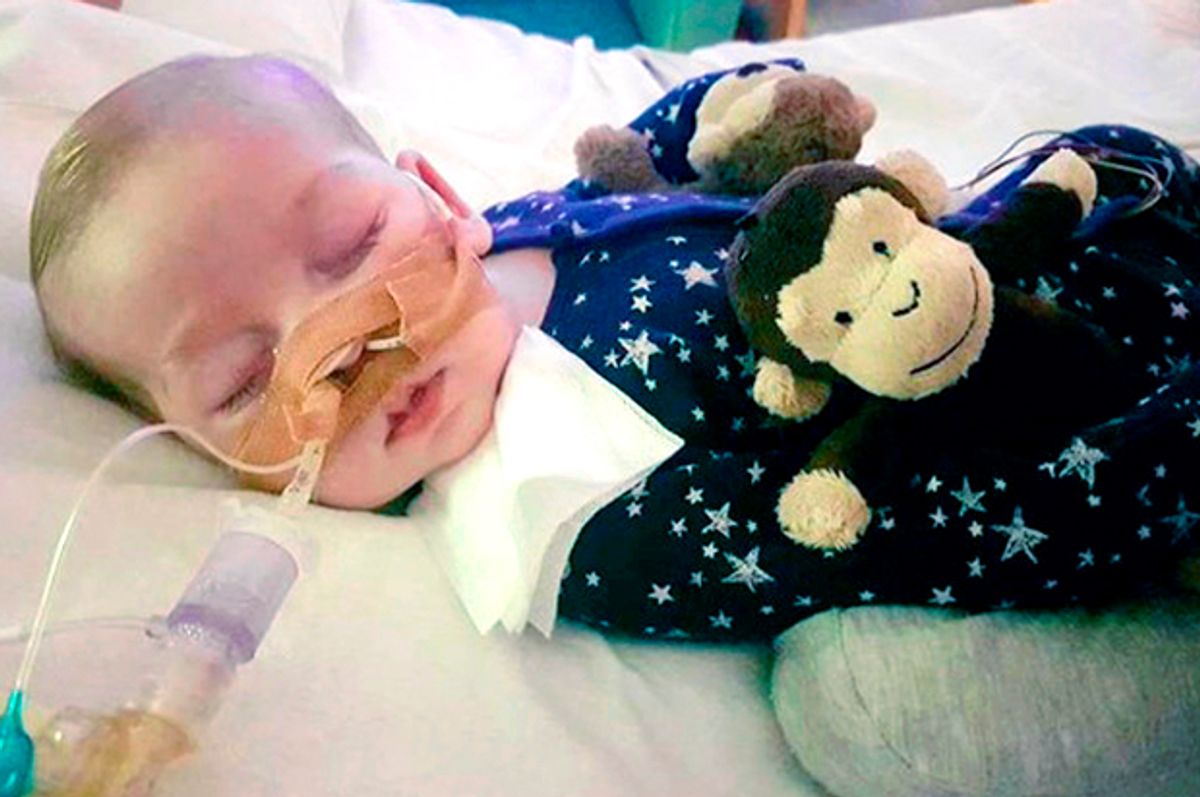 At least two Republicans in the House of Representatives have shown far more of an interest in one particular life — that of Charlie Gard — than for the millions of other, less well-known lives already in their care.

Reps. Trent Franks of Arizona and Brad Wenstrup of Ohio are both introducing a bill that will allow Gard, an 11-month-old baby on life support in London, to receive permanent residence in the United States, according to a report by AOL News. Already, the predicament of Gard has become an international issue as a recent judicial ruling prevented Gard's parents from traveling abroad with their son to seek more advanced treatment than their national health system was able to give the child.

In a joint statement released on Friday, Franks and Wenstrup argued that "our bill will support Charlie's parents' right to choose what is best for their son, by making Charlie a lawful permanent resident in the U.S. in order for him to receive treatments that could save his life." This is a commendable sentiment and a laudable action.

Franks and Wenstrup's willingness to extend their compassion and the legal protections afforded by U.S. citizenship stands in contract to their positions on a number of issues that similarly effect the health of millions of children.

Wenstrup faced protests outside of one of his district office's because of his decision to vote for the American Health Care Act, which will undo many of the protections received by the sick and poor by President Barack Obama's Affordable Care Act. Franks also voted for the bill, although he initially opposed it because he wanted to make sure it retained anti-abortion provisions and gutted insurance regulations.

A number of studies have found that removing people from their health insurance, as would happen in roughly 22 million cases under the current Republican health care bill, will almost certainly cause a large number of deaths. Both congressmen have, nonetheless, supported repeal.

As well, Wenstrup has opposed admitting Syrian refugees into the United States, thus taking a position that would prevent at-risk children from getting healthcare and, one presumes, return them to a war zone. Franks has similarly supported President Donald Trump's proposal to apply "extreme vetting" to immigrants coming from nations with Islamist terrorist ties, another move which would, in turn, prevent both adults and children from getting necessary healthcare.

Perhaps most interestingly, Franks was a co-sponsor of 2009's the Birthright Citizenship Act, a bill that would have required at least one parent of any child newly born on U.S. soil to be either a citizen themselves, a legal resident or alien working for the U.S. armed services in order for that child to receive U.S citizenship. It was designed, by its sponsors' own admissions, to prevent "anchor babies" — that is, children born to undocumented residents who would give their parents some leverage applying to extend or make permanent their stays in this country. That and a number of bills like it have failed to become law.

Today, Gard's parents provided what a judge called "new and powerful" medical evidence that, indeed, therapies available only in the U.S. may help the child despite British doctor's advice that he be taken off life support.