With Haim's "Something to Tell You," the soft-rock revival hits its peak

On their new album, the sisters go back to the '70s AM-radio well and surface with something thoughtful and sharp 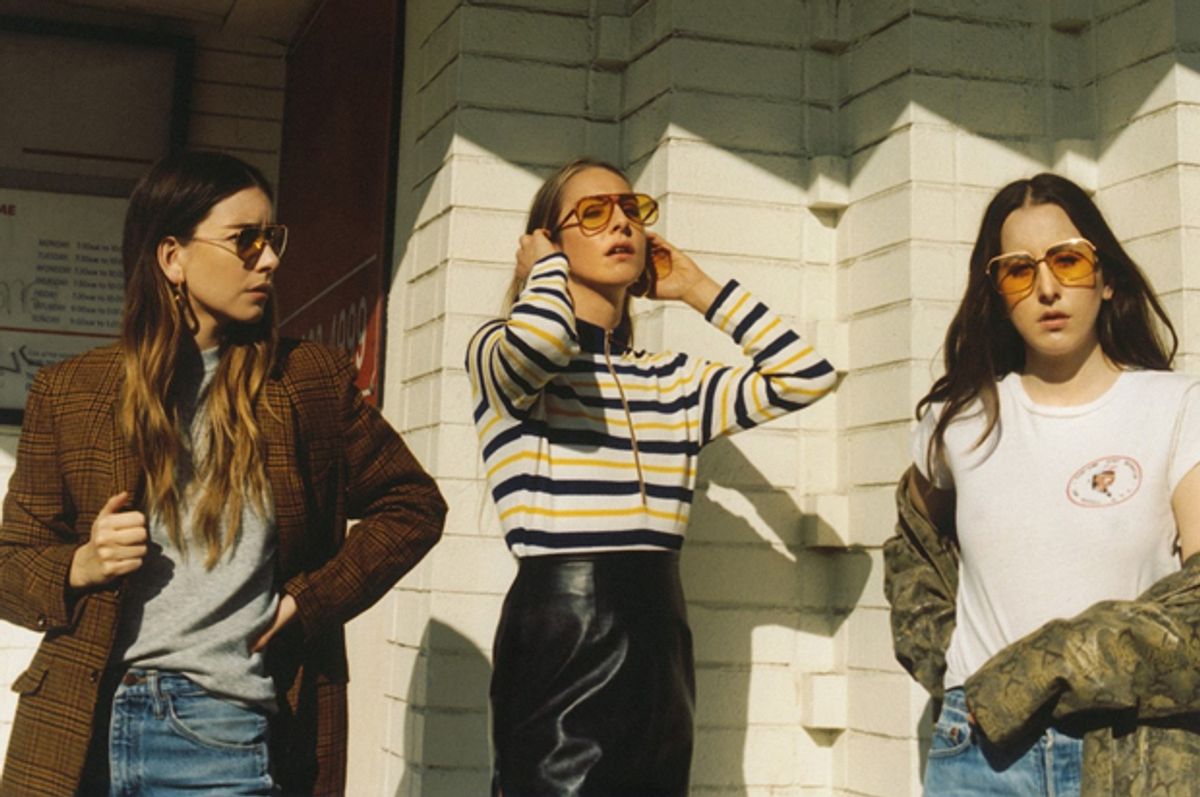 In June, Haim dropped the first video off their long-awaited sophomore record "Something To Tell You," which comes four years after their brilliant debut "Days Are Gone." The song, “Want You Back,” is just about the closest thing on the new record (release date July 7th) that resembles the delicate balancing act of Michael Jackson meets Wilson Phillips meets Billy Ocean that made up the surprise runaway 2013 hit album.

The video, a long moving shot of the sisters roaming the empty San Fernando streets they grew up in seems like a coy commentary of their status as self-described “geeky girls” gone cool. Their serious, posed expressions present them as aloof stars. That serious-as-stone image is disrupted at random as the three members insert some of their best minor league semi-synchronized ‘80s dance moves and goofy of air-drumming. It doesn’t fit the shot, but that’s the point.

With four years of waiting, expectations are high. "Days Are Gone" is a nearly flawless retro pop record from a band (with an incredible backstory playing in a family band called Rockinhaim as kids) that sounds like someone took the best, most endearing elements of soft rock, R&B and breezy beach pop from the ‘70s and ‘80s, and jumbled it all together, flushing out any trace of irony. You can’t help but sing along and get lost in their world of unfettered earnestness and profound spine-tingling joy. The music is so filled with unapologetic exuberance that if you aren’t willing to go along with them, their music might feel a little embarrassing.

It’s not just expectations that have changed. The pop landscape is a whole new beast. Miley Cyrus’ new laid-back single “Malibu” was influenced, in part, by Fleetwood Mac’s Stevie Nicks. One Direction’s Niall Horan sites the Eagles’ Don Henley as an influence on new track “Slow Hand.” Mainstream pop music is finally ready to revisit the ‘70s and ‘80s softer side. Not only have Haim fans been waiting anxiously for new tunes, to the rest of the world, what they’re doing likely seem as weird as what they were doing in 2013 when Cyrus was swinging on a big wrecking ball.

Soft rock, California beach pop harmonies and ‘80s R&B have seeped into the vernacular of indie bands in the past decade, but no one quite mixed together these elements with as much fun, heart, and careful craftiness as the Haim sisters. When they mimic Michael Jackson’s staccato vocal hooks, or lock down the funky guitar licks on top of retro drum machine beats that might have seemed cool on the "Romancing the Stone" soundtrack, you feel willing to question why you ever considered any of the pop music of yore to be so corny. Everything uncool about the ‘70s and ‘80s is actually awesome, at least when it’s played by Haim.

On paper, "Something To Tell You" isn’t all that different stylistically than "Days Are Gone". The primary pool of influences is essentially the same. There’s a slightly stronger R&B component, the energy is a bit more reserved, and it sounds like they might have consumed a bunch more ‘80s ballads than the first time around. What seems like the biggest difference is there’s an awareness that wasn’t there before, which might have to do with shift in a general interest in heartfelt harmonies and Steely Dan.

The instrumentation, structure, and overall musicianship is excellent, probably better than the debut. With help from two of pop’s top producers (former Vampire Weekend member Rostam Batmanglij and Ariel Rechtshaid) it’s no wonder. Yet the spontaneity of the debut, the shocking force of the music, and the get-stuck-in-your-head hooks aren’t there in the same way they emanated from "Days Are Gone".

In its place is something different, and maybe it’s exactly where Haim needs to be. The songs don’t jump out at you, they sit with you in a way that’s not jarring. The music seems like a very natural, normal extension between the current pop market and indie music. “Little of Your Love” the album’s second single is the records catchiest tune with its steady pulsing keyboard part, and hall-reverb drum beat, punctuated with hot noodling guitar licks. It’s similar to “Want Your Back” in that it’s catchy without feeling completely consumed with itself. As the album progresses, it winds down till the songs grow more down-tempo and introspective.

The album’s second half gains a certain sadness virtually non-existent on "Days Gone By." Closer “Night So Long” is a ballad with the force of “These Dreams” by ‘80s behemoths Heart, that when you listened to it at age 10, was the most amazing thing you ever heard, but as an adult was an odd combination of nostalgic and cringe-inducing. Haim lock in on the amazing powerful feelings of 10-year-old you, without that adult-you baggage.

While less a work of spontaneity, or even youthful exuberance, the sisters pull off what is a more somber, thoughtful album, by retaining their strong sense of togetherness. This may not be a record lost inside itself, but it’s a world they’ve created, and are invited you in to.

They mix in just the right amount of technical wizardry to balance their vulnerable heart on the sleeve songs, whether it’s overt or subtle. That’s why they can walk down the street of San Fernando Valley sashaying like they are on the runway, but still goofy enough to allow spontaneous dance moves to invade their walk. It’s the ultimate story of geeks gone cool gone geek again.