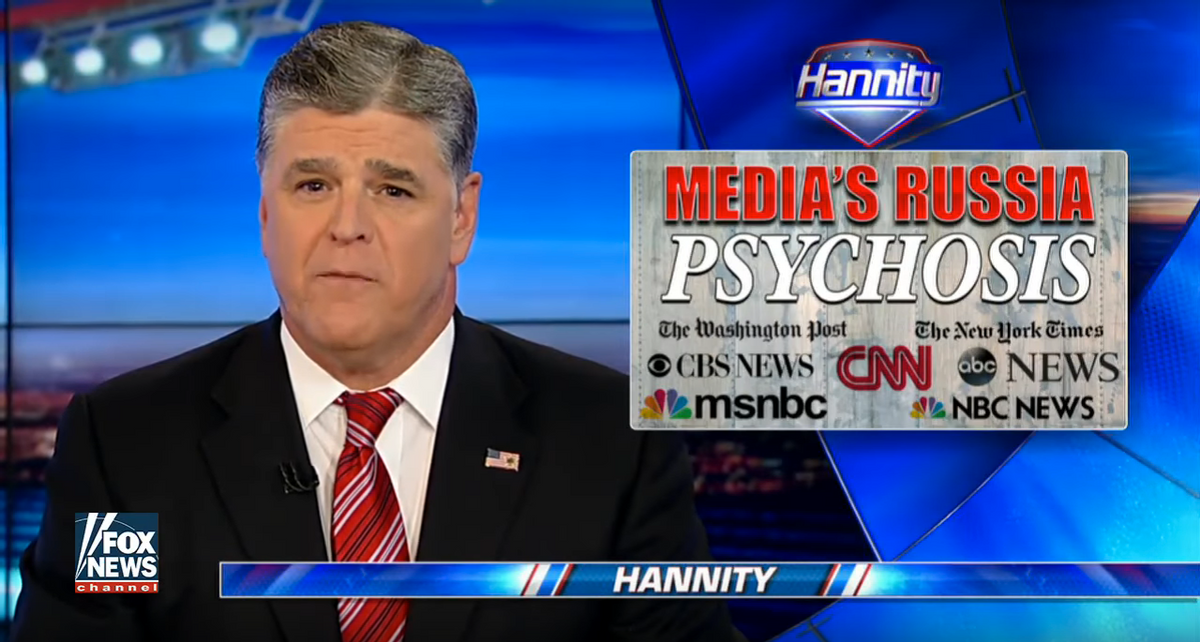 Fox News host Sean Hannity lives in an alternative universe and is begging his audience to join him. The right-wing commentator took his spin to towering new heights on Monday when he blamed everybody except the Trump administration for the growing Russia scandal.

Hannity, a mouthpiece for President Donald Trump, had the audacity to point his fingers at Democrats for the shady meeting that took place in June 2016 involving Donald Trump Jr., Paul Manafort and a Russian attorney.

Telling his viewers that they were not going to hear this from the mainstream media, Hannity said that Trump's legal team thinks the meeting was set up to "give the appearance of Russian collusion." Hannity alleged that an opposition research firm connected to high-ranking Democrats somehow orchestrated all of this.

The Fox News host pre-taped his show Monday before The New York Times reported that there were emails proving that Trump Jr. knew that the meeting with the Russian attorney was around damaging information about Hillary Clinton.

So, instead of sharing this damning detail, Hannity dedicated most of his opening monologue Monday to scandals involving Clinton and former FBI Director James Comey. He misleadingly referenced the uranium deal the U.S. struck with Russia while Clinton was Secretary of State. He also speculated that Comey committed a felony based on a report that some of the memos the former FBI director leaked were retroactively classified.

"What we're now living through is a massive, huge double standard. Selective moral outrage," Hannity said on his program. "Now, we know real felonies, real crimes were committed. Again things the mainstream media will not report or tell you."

Because none of the news these days are becoming of the president or the Republican Party, Hannity has transformed himself from a news host to a media critic.

"Democrats, members of the destroy-Trump media, have now for months been lying, smearing, slandering, trying to delegitimize the president. Stop him from doing his job," Hannity said. "But that's just what they do."

"It just shows just how abusively bias, agenda driven these so called rigid, radical left-wing ideologues are. They are doing a disservice to you the American people," he continued. "They are purposely ignoring the real scandals that exist, the real crimes committed."