How David Brooks is ruining America (and George Will isn't helping, either)

If the columnists are serious about wider access to the American Dream, they need to look at structural barriers 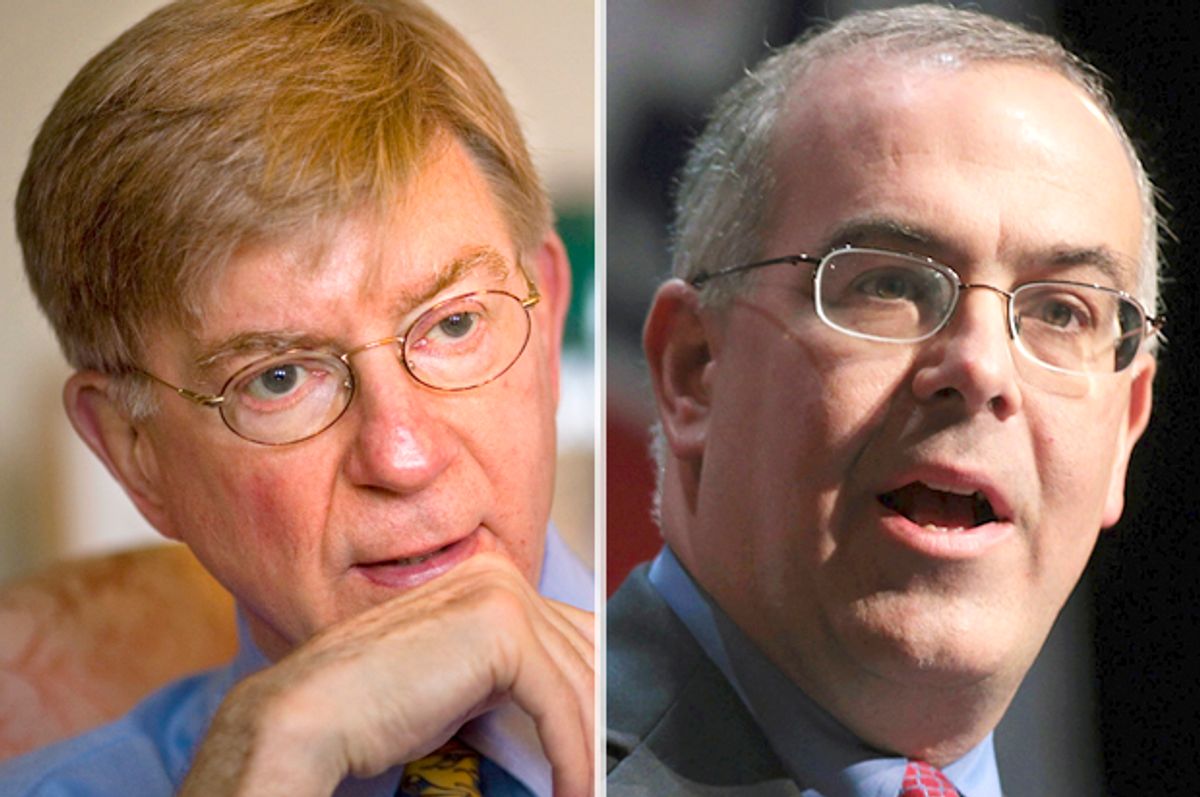 OK, maybe this headline, riffing on the title of his latest column, is a little unfair to the New York Times writer. In his latest column, “How we are ruining America,” David Brooks did start out making some cogent points about how class is becoming an inherited thing, along with wealth, in America. For an establishment Republican like Brooks, this admission — that it is class that allows some parents to invest significant financial resources into their children while others, through no fault of their own, cannot — is practically a Thomas Merton-level epiphany, so I don’t want to dismiss his flirtation with a dangerous newfound consciousness out of hand. Yes, David, there is such a thing as structural inequality, and it plays out in many pernicious ways.

But just as Brooks was about to get woke about zoning restrictions and maybe even how tying school district funding to property taxes enables selective college admissions to be tilted in favor of the children of the affluent,  something spooked him — perhaps he saw the shadow of Bernie Sanders’ hair — and he boomeranged sharply back to his own limited experience, which acts as a sort of force field against the kind of invasive, whole-body understanding that shook Merton on a downtown sidewalk one fine day. David Brooks had an epiphany, sure, but it definitely wasn’t anything like this:

In Louisville, at the corner of Fourth and Walnut, in the center of the shopping district, I was suddenly overwhelmed with the realization that I loved all those people, that they were mine and I theirs, that we could not be alien to one another even though we were total strangers. It was like waking from a dream of separateness, of spurious self-isolation in a special world, the world of renunciation and supposed holiness … This sense of liberation from an illusory difference was such a relief and such a joy to me that I almost laughed out loud… I have the immense joy of being man, a member of a race in which God Himself became incarnate. As if the sorrows and stupidities of the human condition could overwhelm me, now I realize what we all are. And if only everybody could realize this! But it cannot be explained. There is no way of telling people that they are all walking around shining like the sun.

Rather, Brooks blames barriers to upward economic mobility on fluency in imported cured meats, podcasts and David Foster Wallace. And what could possibly be done about that? “I’ve come to think the structural barriers [the Brookings Institution study] emphasizes,” he writes, “are less important than the informal social barriers that segregate the lower 80 percent.”

“Recently,” he continued, “I took a friend with only a high school degree to lunch.”

“Yep, it’s me. I bet you’re wondering how I, a person ‘with only a high school degree,’ ended up here in a ‘gourmet sandwich shop’ with New York Times columnist David Brooks.”

The rest of the column is unbearably obtuse; even to recap it here would be to give Brooks’ fumbling attempt at consciousness in that sandwich shop with his friend, who preferred a Mexican restaurant for reasons we are left to imagine, a grade it doesn't deserve. Suffice to say that David Brooks isn’t wrong when he says there are cultural barriers to class mobility in America, but he is out of his damn mind if he thinks they have anything to do with preferring, say, a Triple D binge (or whatever he imagines people who did not attend a highly selective liberal arts college do for fun) over a “Reply All” marathon.

The secret, which I'm happy to share with David Brooks over lunch as long as he’s buying, is that true cultural barriers can’t be separated from structural barriers. They are intimates; often, they feed off one another.

Let’s take a simple one: teeth. America's middle-class cultural code says straight white teeth signify a clean, disciplined, responsible person — in other words, a person worthy of opportunities. The middle-class cultural code takes the practice of going to the dentist for regular checkups and cleanings starting in childhood for granted, because it takes the ability to purchase dental insurance and the income to cover everything dental insurance doesn’t for granted, and even if sacrifices have to be made for orthodontic services, it takes for granted that these will be attainable sacrifices that won’t hurt in the long run. Maybe it takes fluoridated water for granted, too.

A reasonably curious person can formulate an opinion on David Foster Wallace with nothing more than access to a public library; establishing a middle-class mouth if you’re not born into one can mean playing quite a bit of financial and health catch-up as an adult, even as prospective employers may be reading you as the opposite of opportunity-worthy. When all Americans have access to comprehensive and affordable health care that embraces dental care rather than treating it like a luxury add-on — in other words, when the structural barrier to a healthy and socially acceptable mouth is removed through policy — then another cultural barrier to class mobility can slowly dissolve.

David Brooks stops short of blaming his friend’s lack of upward mobility on her bad taste in sandwiches. He’s ready to launch Occupy Pret a Manger compared to Washington Post columnist George Will, who last week mused about a different Brookings study on “the success sequence”: finish high school, get married, then have kids. In his column, Will falls back on the old canard that “bad choices and the cultures that produce them” cause poverty, not the other way around.

It’s a thesis also embraced to much ballyhoo by memoirist J.D. Vance, whose confessional narrative about growing up in Ohio as the child of an addict in a tumultuous family and bootstrapping himself into the Ivy League — to hear Vance tell it, abuse and addiction are strictly poor people problems, which is probably news to his Yale peers — has made him something of a Magic 8-Ball for members of the national media who don’t really want to understand the working poor (Reply hazy; try again!), but want their own biases about them reaffirmed. Naturally, in Will's exploration of how he thinks poor people just can’t behave well enough for long enough to ascend to the middle class, he invokes the most harrowing passage of Vance’s memoir, in which the author places a furtive call to his girlfriend for emergency cutlery advice during a law firm recruitment dinner:

Success is, of course, more complex than adherence to the sequence. Much cultural capital often is unavailable to poor people. In J.D. Vance’s “Hillbilly Elegy,” his memoir of his rise from Appalachian poverty to Yale Law School, he recounts his experience in the recruiting process with prestigious law firms, during which he learned, among many other things he did not learn at home, “use the fat spoon for soup” and “your shoes and belt should match.” These may seem trivial matters; to upward mobility, they are not.

Will is right — these are not trivial matters per se, but they are also relatively simple hurdles for a resourceful person to clear. Even Ivy Leaguers from public schools have smart phones these days and can discreetly look up "place settings" in the restroom. Less simple, for example, are the staggering amounts of student loan debt many young people who didn't get into the Ivies have to carry that can keep them from the second and third part of that success sequence, including those who have enrolled in for-profit colleges that prey on first-generation students who believe the sales pitch that this degree will be their ticket to “use the fat spoon for soup” recruitment dinners, rather than years of crushing bills and mediocre job opportunities.

Less simple also, looking at the big picture of the opioid addiction crisis — Vance is moving back to Ohio to work on this issue, which could be a preamble to running for public office — are the strains that repetitive physical labor places on a body and how small injuries and stresses can compound over time when untreated or under-treated; the highly addictive pain pills that pharmaceutical companies, doctors and pharmacists flooded into communities where a disproportionate number of people live with pain and without adequate health coverage; and the scarcity of effective, affordable treatment programs after they became hooked.

To this, Brooks might gnash his teeth and wail, “It’s our fault for not explaining how Pilates builds core strength to prevent back pain!” And Will might counter with, “It’s their fault for thinking that life could be anything but constant pain, followed by a long, slow death!” To both I say, go back to that epiphany of Merton’s — if not the theology, at least the substance — and liberate yourselves from the illusion that innate cultural differences can explain why you are wealthy and so many people in America are not.

If, as Brooks claims, feeling comfortable in Whole Foods is a prerequisite for class mobility in America — and if class mobility is still something Republicans claim to believe in — Republicans should support policies that put even more nutritious food in public school cafeterias, where many kids eat two meals per day, instead of looking the other way while Michelle Obama's school meal initiatives are torn apart as elitist and out of touch by their base.

If, as Will says, success hinges on “getting an education, a job and a spouse before begetting children” then don’t just stand there wringing your hands over the youth of today: Support health care policies that ensure women can decide on their own authority if and when they will beget said children.

Merton realized one fine day in a flyover state that “we could not be alien to one another even though we were total strangers.” David Brooks and George Will aren’t ruining America all by themselves, of course. But the worldview they represent, in which "informal social barriers" — that they, affluent conservative columnists who enjoy quite a bit of cultural influence due to the size of their platforms, can't do anything about — are what's standing between those total strangers they don't know or understand and economic stability and mobility, sure isn’t doing America any favors, either.