While Don Jr. implodes, Steve Bannon and Erik Prince have hatched a plan to privatize war and pillage Afghanistan 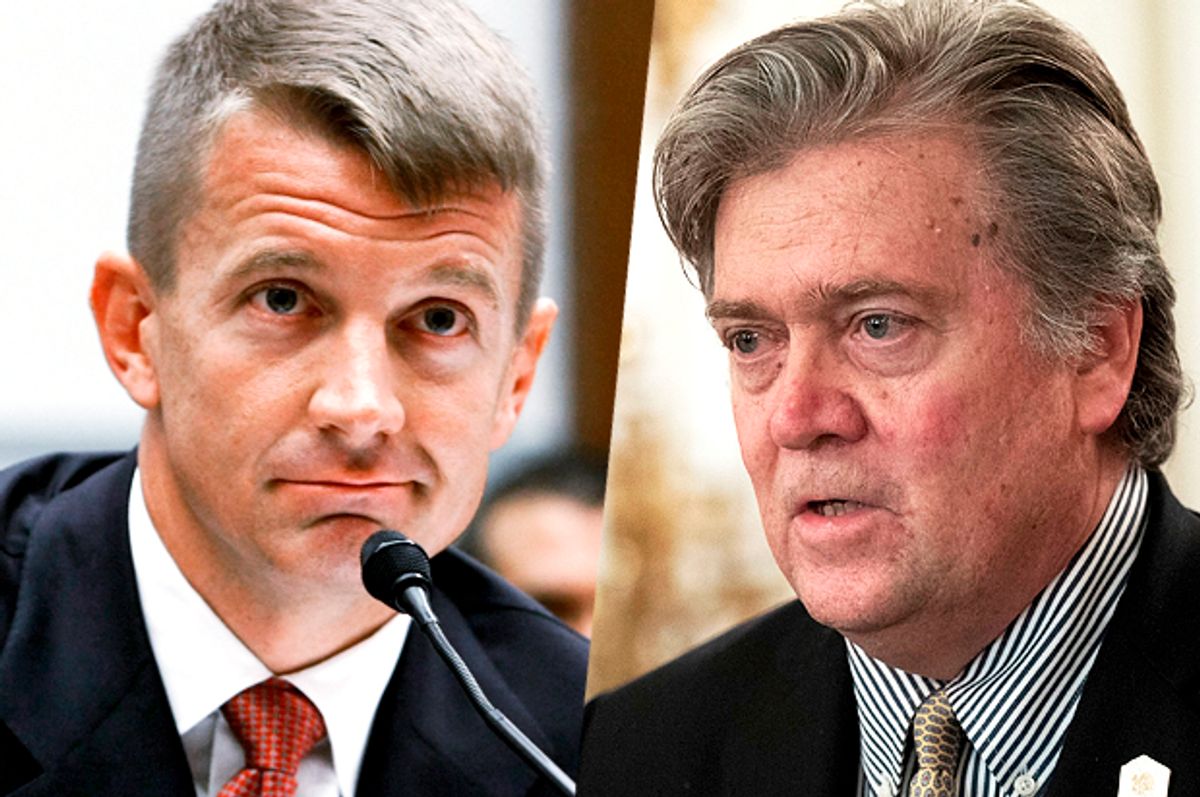 So according to Donald Trump Jr.'s own emails it looks like he, Jared Kushner and Paul Manafort knowingly met with a woman said to be representing the Russian government who was peddling derogatory information about Hillary Clinton. Whether that constitutes a crime is still unknown, but it proves that the Trump campaign was at best dumb as rocks, and at worst willing to collude with a foreign government to win an election in return for God knows what.

That story has sent an electric shock through Washington with tales of a White House in chaos and a Shakespearean family drama unfolding before our eyes. The president has uncharacteristically withdrawn from public sight as his son and son-in-law become the central players in the scandal with speculation running rampant about who is leaking the information and why.

Ever since President Trump's inauguration there has been a tremendous amount of palace intrigue with factions loyal to Jared Kushner and Steve Bannon fighting for influence alongside whichever policy advisers and cabinet officials happen to be relevant that particular week. The Russia scandal has implicated Kushner in ways that make him especially vulnerable, however, and Bannon appears to be filling the vacuum.

According New York Magazine's Joshua Green, who has been following Bannon for years and has a new book coming out on the subject called "Devil’s Bargain: Steve Bannon, Donald Trump, and the Storming of the Presidency," Bannon is fully back in the fold after a few shaky months and he's advising Trump to fight and win by any means necessary. Green reports that the withdrawal from the Paris climate accord, the recent moves on immigration and Trump's Warsaw speech are all signs that Bannon's influence is once again on the rise. He notes that Bannon, so far, is personally untouched by the Russia scandal:

Bannon’s feud with Kushner has quieted down. And so far, while at least ten White House officials and former aides, including Kushner, have retained lawyers in the special counsel’s probe, distancing themselves from Trump, Bannon is not among them.

Instead, he’s back in the bunker alongside a boss who is often angry, always under fire, and, on the matter of Russia, increasingly isolated from all but a handful of advisers and family members.

Green calls Bannon "Trump’s indispensable henchman, the man he turns to when everything’s going to hell," and says he is in charge of Trump's "war room." That has largely been concentrated on assassinating the character of Robert Mueller, which Bannon evidently sees as the fight's most important priority.

In a startling story that got overlooked this week amid all the Don Jr. email excitement, the New York Times reported that Bannon and Kushner have been dabbling in real war planning as well:

Erik D. Prince, a founder of the private security firm Blackwater Worldwide, and Stephen A. Feinberg, a billionaire financier who owns the giant military contractor DynCorp International, have developed proposals to rely on contractors instead of American troops in Afghanistan at the behest of Stephen K. Bannon, Mr. Trump’s chief strategist, and Jared Kushner, his senior adviser and son-in-law, according to people briefed on the conversations. On Saturday morning, Mr. Bannon sought out Defense Secretary Jim Mattis at the Pentagon to try to get a hearing for their ideas, an American official said.

I wrote about Prince's relationship with Trump a few months ago. They're close enough that Prince was with Trump and the family on election night. Prince has also been implicated in the Russian scandal, according to the Washington Post, having arranged a secret meeting in the Seychelles Islands with an emissary from Vladimir Putin to set up a back channel between the two presidents. Prince is also currently under investigation by the Justice Department and other federal agencies for money laundering and attempts to broker military services to foreign governments. His history of running a criminal operation in Iraq is well known, but he seems to have landed on his feet. It's easy to see why Trump has such a high regard for him. He's almost like family.

Prince wrote about his plan in the Wall Street Journal in May, suggesting that the president appoint a "viceroy" for Afghanistan, using the colonial model of the East India Company to illustrate his idea. Salon's Matthew Pulver explained how Prince planned to bring this idea up to date:

The British East India Company was not simply a mercenary army like his Blackwater but an armed corporation that colonized like a state power. It was not merely a government contractor like Blackwater but an autonomous military and administrative entity sharing the worst aspects of both the corporation and the imperial state. So, Prince’s first innovation is to do away with civilian-military control administered by the Department of Defense and overseen by civilian, elected leadership, as is currently in place, and replace that apparatus with an armed corporation.

The second innovation will be to use cheap local labor paid for by resource extraction. Pulver wrote:

"There’s a trillion dollars in value in the ground: mining, minerals, and another trillion in oil and gas,” Prince says of Afghanistan. This would provide the revenue stream to replace government contracts. Prince’s firm would be self-funded, self-reliant, and thus autonomous to a degree more similar to a nation-state than a military contractor like Blackwater serving under a defense department.

I have long believed that the notion Trump is an isolationist is a grave misunderstanding. He's a crude imperialist, who believes we should "take the oil" because "to the victors belong the spoils." Lately, it's become less clear that  Bannon's "nationalism" is aligned with America rather than some vague (and racist) notion of "the West." It looks more and more as if Trump's loyalties lie wherever the Trump Organization has a real estate or licensing deal. Prince's plan sounds like it's a perfect fit for both of them.

Thankfully, according to the New York Times, Secretary Mattis "listened politely" but told Bannon that he had no intention of including this daft idea into the review of Afghanistan policy that he and national security adviser H.R. McMaster are leading. Let's just hope that Bannon and Trump are now so immersed in their Russia scandal "war" plans that they lose interest in privatizing a real one.