Donald Trump Jr.'s emails won't change anything: His dad's supporters will stay loyal no matter how much collusion is exposed

These are important revelations — but they won't sway Trump's base, and may only worsen our national crisis 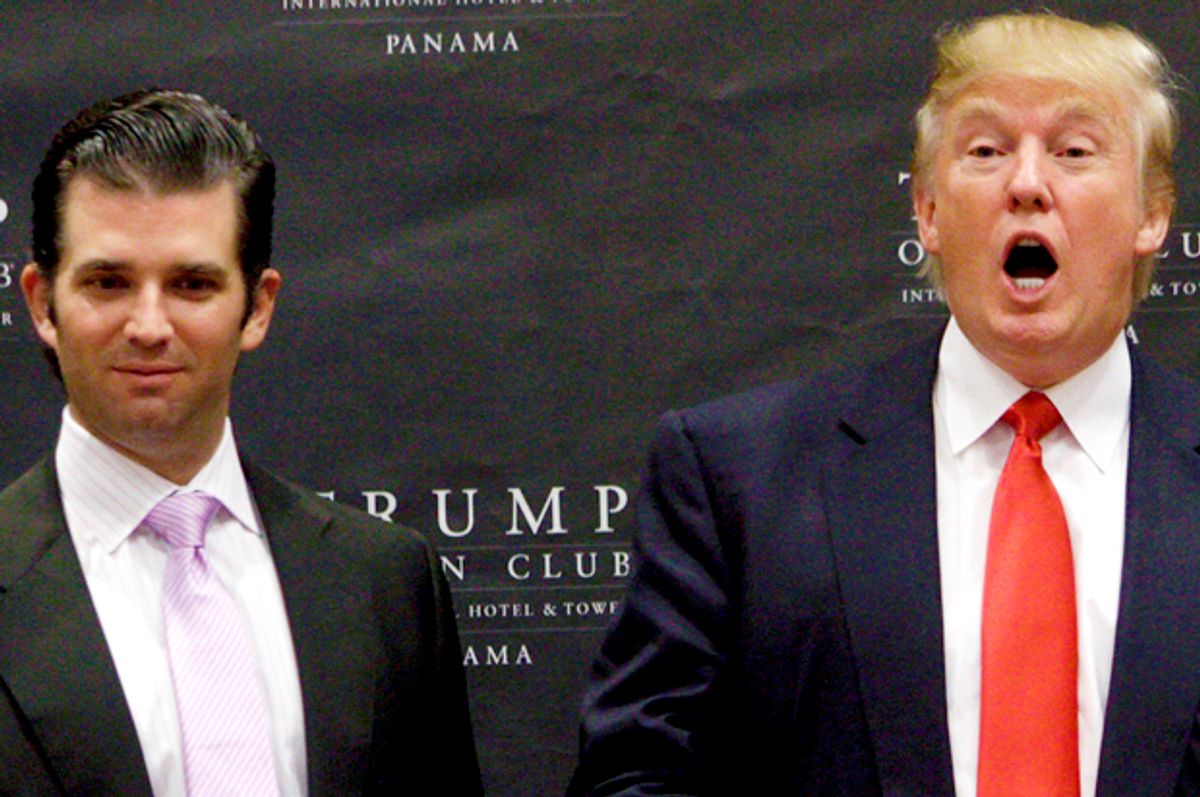 When I was in middle school, one of my daily rituals consisted of walking home with a close friend. During that time, we would talk about what happened in our classes, share gossip and rumors about girls, fights, gangs and bullies, and plan our “social calendar” for the weekend. At the end of our walk, we would arrive at his mother’s apartment and then play hours and hours of video games. Contra was a favorite — without the legendary cheat code. We were purists and such crutches seemed ungentlemanly to us. Ghosts ‘n Goblins was a close second. There would be an obligatory game of Excitebike or Punch-Out as well.

My friend’s mother was a social worker who directed a nearby school system’s programs for disabled students and tended to work late hours. She was generous and patient. Her only rules were that we were not to leave a mess in the den and most importantly, that we were not to give the family dog — a small, lovable and very smart mutt — any “people food.” As young people so often do, we finally succumbed to the dog’s begging. He seemed so excited that after years of whimpering, making sad eyes and trying to jump high enough on his short legs to reach the kitchen table that he would finally get a nibble of people food. I have forgotten what food we gave him that afternoon. But I do remember the dog’s excitement on first tasting it, and then the look of disappointment after he gulped it down. After that moment, the dog never showed interest in "people food" ever again.

During these last few days and months, I have been thinking a lot about that dog.

On Tuesday, in an effort to pre-empt the New York Times, Donald Trump Jr. released a series of emails that clearly show his desire to work with the Russian government to undermine Hillary Clinton’s 2016 presidential campaign and help his father win the White House. This is a clear example of colluding with a hostile foreign government with the goal of subverting American democracy. Donald Trump Jr.’s actions are likely illegal and, as Sen. Tim Kaine has observed, potentially treasonous.

Trump Jr.’s emails are but one more drip in the flood of evidence that Russia colluded with his father’s 2016 presidential campaign. Trump’s closest advisers and confidantes have close and long-standing financial relationships with Vladimir Putin and the Russian government — and several of these advisers and confidantes have repeatedly lied about those connections. Trump’s former campaign manager, Paul Manafort, is under investigation for receiving money (and perhaps illegally obtained information) from Russian interests. Trump’s first national security adviser, Michael Flynn, may well have been a Russian agent.

The Russian government and its agents also gained access to voter registration and other information that would be very useful for Trump’s presidential campaign. America’s intelligence agencies unanimously agree that Russia interfered in the 2016 presidential election to help Trump defeat Clinton. In an almost textbook example of an impeachable offense, Trump pressured former FBI Director James Comey to stop investigating Russia’s meddling in the 2016 presidential  election. Trump fired Comey when he would not comply. Trump also publicly encouraged the Russian government to obtain and make public Hillary Clinton’s emails and other confidential information during last year’s election campaign. Spitting in the face of his own country’s intelligence and national security professionals during last week’s G20 meetings, Trump apparently accepted Putin’s assurances that Russia did not interfere in the 2016 election.

The “revelations” about Donald Trump Jr.’s emails and his apparent collusion with Russia -- and the overwhelming amounts of other evidence pointing to the same conclusion -- speak to a very important subject. But in this political moment such revelations about despicable behavior by Donald Trump and his clan are like the stained bed sheets at a cheap hotel. The sheets are washed but never truly clean. And no one is really surprised by the mess anyway.

Thus a painful truth for those patriotic Americans who oppose Donald Trump: He will not be impeached. His son’s emails basically admitting collusion with Russia will ultimately mean little if anything.

Because there is likely no amount of empirical evidence or facts that will turn the Republican Party and its supporters against President Trump. He is a tool for accomplishing the Republican Party’s goals of giving more money to the very richest Americans, punishing poor and working-class people, destroying the commons and the social safety net, creating a Christian theocracy, undermining the middle class, giving corporations full control over the country, destroying the environment, taking away women’s control over their own bodies, abusing Muslims, and denying the civil rights, freedom and equal citizenship of African-Americans and other people of color. In all, the Republican Party, its voters and the right-wing media have chosen political power over loyalty to country. In that context, Russia’s meddling in our presidential election to put Donald Trump in the White House is but a means to an end.

I have written hundreds of essays about the rise of Donald Trump and what it tells us about American politics and culture. I am also in the process of writing a book on the same topic. In my writings on Donald Trump and this political moment, I have tried to warn and prepare readers for the reckoning that is coming to the United States. Yes, in some ways the reckoning has already arrived in the form of Trump’s fascism and the authoritarianism, bigotry and racism that fuel it. But there are worse things on the horizon in Donald Trump’s America.

When the full scale and depth of Russia’s interference with last year’s presidential election are laid bare for the world to see, Donald Trump’s rule will be made wholly illegitimate. The Republican Party will then be implicated as a co-conspirator in one of the greatest political crimes in American history. Nevertheless, Republicans and other members of the American right wing will continue to support Donald Trump. Because of  their authoritarian impulses and conditioning by the conservative media, Trump’s supporters may actually back him even more enthusiastically once the facts about his betrayal of American democracy are made public.

Such a moment will explode the fissures that divide America’s political culture: Patriots will set upon traitors; both camps will believe they are in the right, and that they act with the nation’s best interests at heart.

In the search for the smoking gun in Donald Trump’s collusion with Russia, be careful what you wish for. You may well get it, and the consequences may be more than you are prepared for.