Kid Rock isn't really running for Senate, unless he is

His new website suggests the Detroit-born rocker is running for Senate, but it's truly not that simple 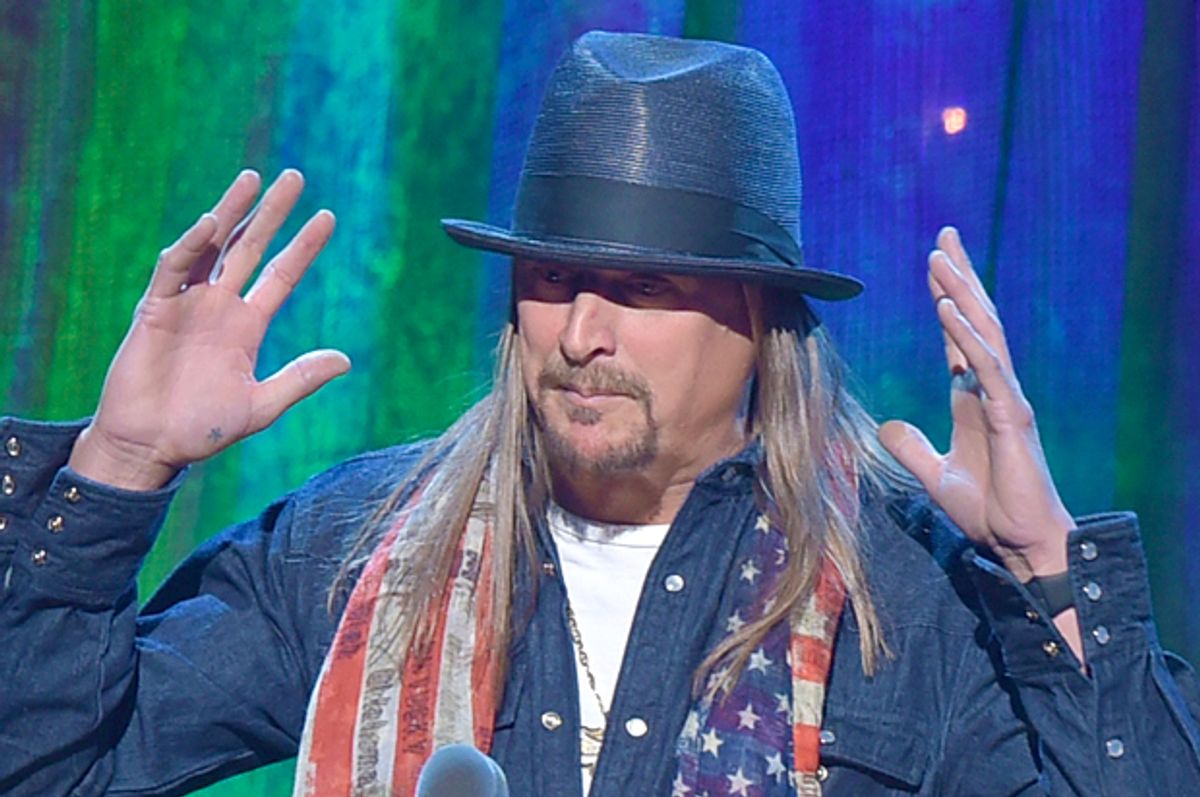 Is Kid Rock aiming to be a United States Senator? The new website Kid Rock of Senate seems to be designed to give that impression.

Kid Rock himself — real name Robert James Ritchie — added fuel to the fire of speculation by posting a pair of tweets which showed a "Kid Rock for US Senate" sign and promised "a major announcement in the near future."

If true, this would put the Republican rocker and signer of the 1998 hit "Bawitdaba" in a race with Democrat Debbie Stabenow in the 2018 elections.

While many reputable news agencies have gone with headlines such as "Kid Rock confirms Michigan Senate run," the artist actually doesn't do that in the messages above. He merely indicates that the website is "real" (which ontologically speaking, it is) and that he has a "major" announcement in the works.

Indeed, New York Magazine observed that a "sign that this is a stunt is the website visitors are sent to when they click the link under the 'Kid Rock for U.S. Senate' swag. It’s hosted on his Warner Brothers Records website." Should a major music company be pushing merchandise for a political candidate, it would not only be a historical first, it could be a breach of campaign finance law.

As well, Ritchie has not filed with any elections board, created any campaign fund or even confirmed his run with his own party. Michigan Republican Party Chairman Ron Weiser told the Chicago Tribune that "it could be a publicity ploy. Don't know." It could be that the finer, necessary legal and organizational steps toward a Ritchie candidacy are still in the works — it could be that this all a commercial fantasy meant to scare up album sales.

A slapdash, hype-based candidacy would, yes, be familiar to Ritchie. The musician has been a vocal supporter of President Donald Trump, tracing all the way back to the early days of the 2016 presidential election.

"I'm digging Trump," Kid Rock told Rolling Stone. "I feel like a lot of people, whether you're a Democrat or a Republican, feel like if you get Hillary or Bernie, or you get Rubio or Cruz or whoever, there's going to be the same shit. Has that much fucking changed when anyone's in office, whether it's been a Republican or a Democrat in office, in our lifetime, anyway? I haven't really seen this big, like, fucking change. Obviously some people fucked up."

After laughing, Kid Rock added, "That's a long debate. My feeling: let the motherfucking business guy run it like a fucking business. And his campaign has been entertaining as shit."

Indeed, Ritchie's campaign — real or not — is already entertaining (albeit in a dystopian way). But there is simply not enough evidence to suggest that it is anything other than a red-white-and-blue hype exercise at this point.

Then again, it could wind up being something real. Stranger things have happened.