Russia scandal goes well beyond Trump: GOP leaders definitely knew about hacking — did they benefit too?

Leading Republicans knew about Russian hacking long before Trump's nomination. They said nothing and did nothing 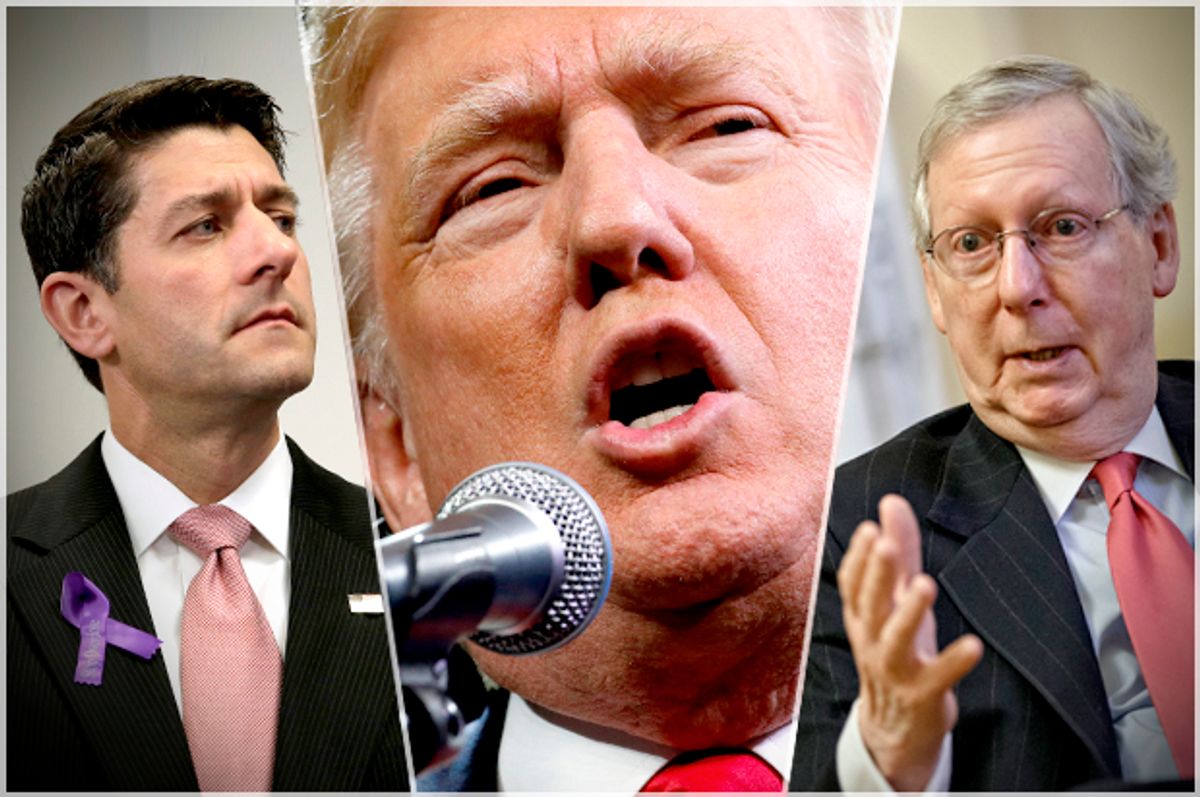 Despite Europe's clear disdain for President Trump it seems as though he's over there every other week. In fact he's arriving in France on Thursday at the invitation of President Emmanuel Macron to help celebrate Bastille Day and have dinner at the Eiffel Tower. Considering that Trump has implied repeatedly that Paris is nothing but a hellhole these days, it's a testament to just how desperate he is to get out of Washington. The heat is on and he wants out of the kitchen.

You have certainly heard that Donald Trump Jr., Jared Kushner and Paul Manafort met with a Russian lawyer to get some promised dirt on Hillary Clinton that was represented as being part of a Russian government program to help Trump get elected. Now we know their breathless protestations that they didn't know nothin' about no Russians were lies, and we also know that this particular tawdry scheme reached into the highest levels of the campaign. We'll have to wait for the next shoe to drop. There is always another shoe.

There was one new story on Wednesday that added an interesting detail to the saga and points to a possible larger conspiracy. McClatchy reported that House and Senate investigators as well as the Justice Department are looking at the Trump campaign's digital operation, one of Jared Kushner's pet projects (financed by big-daddy benefactor Robert Mercer), to determine if it may have worked with Russia's sophisticated micro-targeting and propaganda program during the 2016 campaign.

McClatchy also reported that the Justice Department is looking into "whether Trump’s campaign pointed Russian cyber operatives to certain voting jurisdictions in key states – areas where Trump’s digital team and Republican operatives were spotting unexpected weakness in voter support for Hillary Clinton." That's an issue I've written about previously here on Salon, based on some post-election investigative reporting by the New York Times.

This raises once again the question of just what was going on in the Republican Party during this period. After all, it wasn't just Donald Trump who benefited from Russian hacking. The GOP-dominated House majority was a major beneficiary as well.

Remember, the congressional leadership knew in 2015 that it was happening. Reuters has reported that the so-called Gang of Eight (Republican leaders in Congress) was told that Russian hackers were attacking the Democratic Party but that the information was so top secret they could not share it. As we know, hackers attacked the Democratic National Committee and the personal email of Clinton campaign chair John Podesta. But they also hacked the Democratic Congressional Campaign Committee, and information gleaned from that hack was put to use in some 2016 campaigns for Congress.

Also recall that one month before Donald Trump Jr. took that meeting with the Russian lawyer, House Majority Leader Kevin "loose lips" McCarthy was talking about Trump's connections to Vladimir Putin in a room full of Republicans:

A month before Donald Trump clinched the Republican nomination, one of his closest allies in Congress — House Majority Leader Kevin McCarthy — made a politically explosive assertion in a private conversation on Capitol Hill with his fellow GOP leaders: that Trump could be the beneficiary of payments from Russian President Vladimir Putin.

“There’s two people I think Putin pays: Rohrabacher and Trump,” McCarthy (R-Calif.) said, according to a recording of the June 15, 2016 exchange, which was listened to and verified by The Washington Post. [...]

This was the day after news had broken that the Russians had hacked the DNC and Ryan and McCarthy had just come from a meeting with the Ukrainian prime minister, who "had described a Kremlin tactic of financing populist politicians to undercut Eastern European democratic institutions."

Republican leaders kept this from the public for a year, then lied repeatedly about it when confronted until someone produced an audiotape, at which point McCarthy, Ryan, et al., said it was just a joke. Maybe it was. But we know for sure that this idea about Trump being under Putin's thumb was in the ether in GOP circles even as the party was getting ready to nominate him as its presidential candidate.

Fast forward to late August when the intelligence community was becoming frantic over the evidence of Russian interference and Director of National Intelligence John Brennan held private classified briefings with eight top congressional leaders, telling then that there was evidence the Russians were helping Donald Trump and that unnamed advisers to the Republican nominee might be working with them. In September, intelligence officials convened a big meeting with the Gang of 12, meaning the House and Senate leadership along with chairmen and ranking members of committees on intelligence and homeland security. It was assumed this would result in a "show of solidarity and bipartisan unity" to protest this threat to the integrity of the American democratic process.

That was an erroneous assumption. The Republicans refused to sign anything that implicated the Russian government, only agreeing to tell state elections officials to beware of "malefactors" attempting to hack election software. Senate Majority Leader Mitch McConnell reportedly said he would consider any effort by the White House to challenge the Russians publicly "an act of partisan politics." That was that.

Since the election, when Republican officials aren't actively helping the White House cover up and misdirect, as House Intelligence Committee chair Devin Nunes did, with a few exceptions they still dismiss the scandal, even in the face of documentary evidence like the Donald Trump Jr. emails.

There's a lot of punditry every day bemoaning the fact that President Trump refuses to admit that the Russian interference in the campaign happened, seeing it as a stubborn (and insulting) rejection of the U.S. intelligence community and a dangerous unwillingness to take needed action to prevent it happening again. But really, why is Trump the only one on the hook? The Republican leadership has turned a blind eye to what was happening since 2015. They knew. They may have even known more about it than Trump did, at least in the beginning. They did nothing about it then and have shown no signs that they plan to do anything in the future.

It's not all on Donald Trump. He may been the principal beneficiary but the leaders of his party aided and abetted the crime. We may just learn that they benefited from it too.