It's good that Shia LaBeouf is seeking help, but he's still a racist

Following a series of disturbing videos, the actor issues an apology, asking you to blame his racism on the alcohol 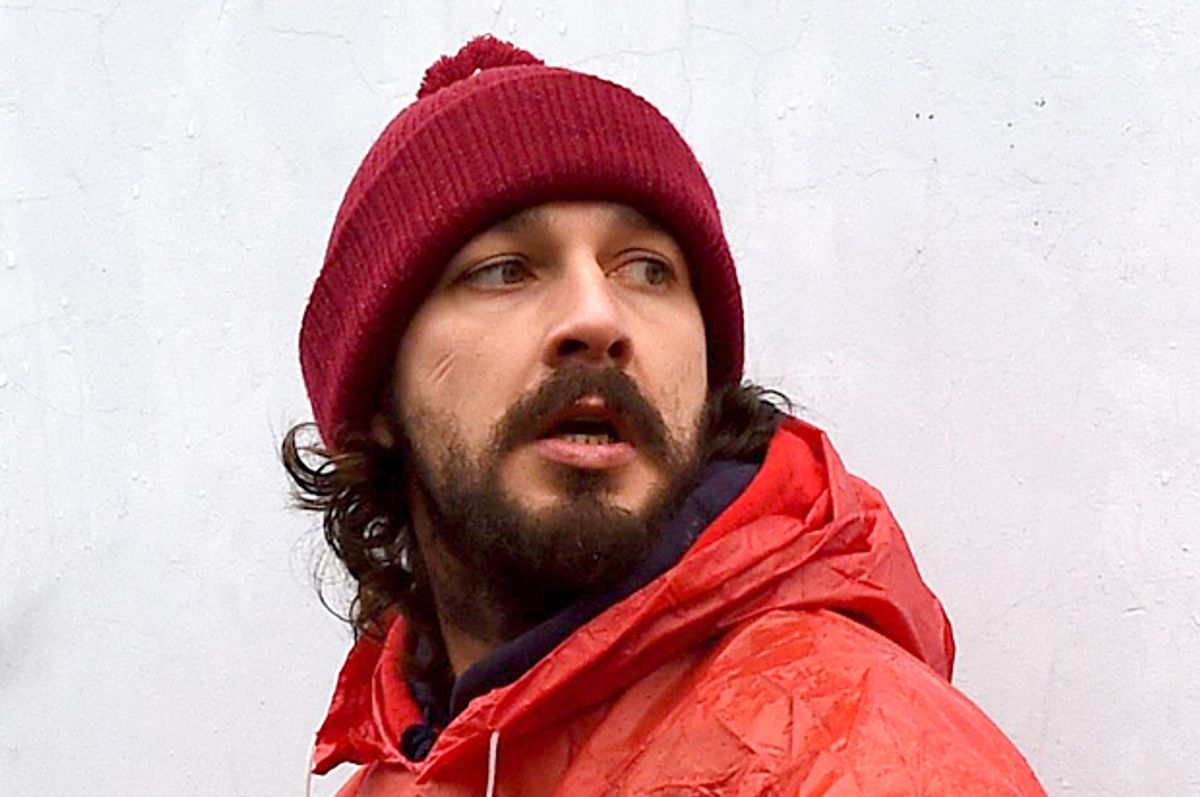 Over the last decade or so, it's become crystal clear that Shia LaBeouf is a troubled person. From run-ins with the law, to public outbursts, to threatening the lives of both strangers and his own wife, there's a video trail of evidence that suggests he suffers from one or another form of mental illness combined with a substance abuse problem — two conditions that serve to exacerbate each other in many individuals.

Search deeper into his history and you'll see signs of what could be oppositional defiant disorder, mania and depression going back to his pre-teen years. Yes, it's impossible and unfair to diagnose anyone without confirmed first-hand, in-session analysis — yet, in LaBeouf, all the markings of someone who needs help are there.

Looking at a series of events that go back to at least to his 2008 DUI crash all the way to this week's release of videos showing a inebriated, disturbed LaBeouf threatening and hurling misogynist and racist insults at Savannah-Chatham Metropolitan Police officers, it's hard not to have sympathy for the 30-year-old star of the "Transformers" franchise.

His Twitter statement issued after the arrest videos surface — a very generalized apology for his behavior and admission of his various personal problems — should indeed spur empathy and hopes that he finds proper counseling and psychiatric treatment.

And, despite our necessary appreciation for and understanding of the fact that he faces challenges partly beyond his control, it's hard not to see Shia LaBeouf as anything other than a racist, someone who has incorporated aspects of White Identity theory into his mental repertoire.

Following an outburst over being refused French fries on July 8, an apparently drunk LaBeouf first upbraided a white bartender for his racism against his black clients — something the black people in attendance did not agree with. After running to his hotel, he was confronted by police and then arrested for public drunkenness, obstruction and disorderly conduct.

In the patrol car on the way to the Savannah-Chatham Metropolitan Police, LaBeouf told a white officer, "You put your own kind in the pen for nothing... you put a white man in the pen for what?"

At the station, LaBeouf told two officers — one white, one black — that “You’re going to hell, straight to hell, bro.” turning to the black officer he said, “You, especially, Devin.” When asked by the white officer why his partner, "especially," the actor said, “Cause he’s a black man.”

These comments came in the context of multiple death threats, claims of racism against a white man by a black officer, near uncountable misogynistic statements (you try to tally up how many times LaBeouf calls a male officer a "bitch" and get back to me) and more. The long trail included graphic suggestions that a white officer's wife cheated on him with black men. It all comes off as a particularly bigoted, explicit highlight reel from the "Cops" television show.

Now, LaBeouf's statement does offer an apology directly to the officers involved, general mea cuplas about his "behavior" and an admission that his "outright disrespect for authority" is "problematic". Yet nowhere in that statement is any mention of his racist comments. To LaBeouf they are bad "behavior", "mistakes" attached to substance abuse and, apparently, less crucial than his problems with "authority".

Of course, they are much more. Beyond racist, claims that white people should loyal to their "kind" and that black people are going to hell align not just with general bigotry, but the concepts of white nationalism and Christian Identity (the noxious belief that somehow God has set aside this earth for the white man to rule and black people are damned). They are part of a more refined and more systematic concept of white superiority than simple racism.

One may say that LaBeouf was simply using these concepts to rile and trigger the arresting officers. Fine. But willingness to use these concepts shows both a familiarity with them and an acceptance that they can be used — this is in no way different from racism, it's simply a more cynical, less honest approach to it.

One may say that LaBeouf was intoxicated, unstable and generally unwell and not responsible for his statements. That falls flat as well. Many made the same claims about John Galliano when, in 2011, he made a series of anti-Semitic comments while under the influence. I'll quote myself from my reportage on that incident: "I’ve had my share of liquor in my time, and never said anything as racially vile as what appears on that video. That’s not because I've never been as drunk as Mr. Galliano. It’s because I’m not a racist."

Intoxication, altered mental states and mental illness are no explanations for racist behavior aside from the fact that all loosen lips, lower inhibitions and let what is normally hidden inside come out.

LaBeouf had the theory of Christian Identity available and active in his mind For whatever reason, he used it. Regardless of whether he considers himself a racist, he took racist actions. Functionally, that makes him no different from Richard Spencer, just more complicated.

Yes, LaBeouf has a long history of working with people of color in film (including black actors), being seen with people of color in personal situations and generally forwarding progressive causes and launching into art projects that speak to global harmony and racial understanding. But this week's revelations trump all that. Race baiting and bigotry simply cannot co-exist with progressive, inclusive thought. It doesn't work that way.

This is not to say LaBeouf is beyond sympathy or beyond hope. Quite the opposite. The treatment he now claims he will be getting is the ideal opportunity for tackling and overcoming these issues. Should he address his comments directly or emerge from treatment changed not just in sobriety, but in mindset and speech as well, it will be a victory not only for him, but for his remaining fans, those he's hurt and those who forward inclusivity.

Part of that necessary treatment, however, will have to (and likely will) be confronting the darker theories inside his troubled head. To get well, LaBeouf not only has to confront the fact that he's an alcoholic, he'll have to confront the evidence that he's a racist too. Let's hope he does.