"The Ring Thing": We won the right to marry, now what the hell do we do with it?

As one movie reveals, legal same-sex marriage has created new questions and anxieties in the LGBTQ community 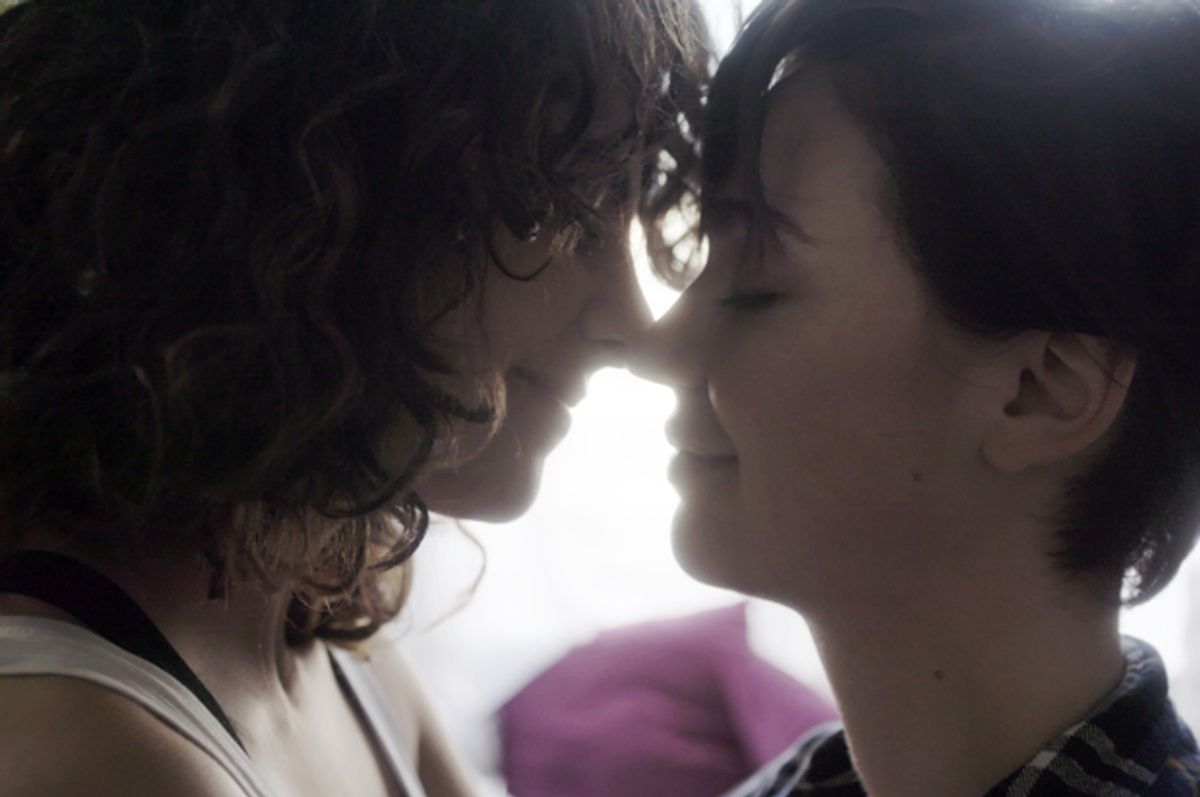 It’s been just over two years since the Supreme Court decision on marriage equality, yet some are still unwilling to accept the rule of law.

Not only are individuals continuing to protest, but the executive branch is doing what it can to undermine the Court's ruling on Obergefell v. Hodges. Local governments, too, are pushing back. Texas, for instance, has challenged the decision, hoping to deny benefits to same-sex couples.

But, life goes on. Throughout LGBTQ community, thousands of same-sex couples have already tied the knot, gaining additional rights for health care, wills, adoption and other legal benefits.

However, there is also an attitude that marriage is not for everyone. Just because the opportunity to get married exists, doesn’t mean everyone in the LGBT community has to (or should) get married.

The provocative new film, “The Ring Thing,” playing Outfest July 15, tackles the thorny issue of same-sex marriage and divorce by presenting various opinions from both gay and straight subjects.

Director Will Sullivan, who co-wrote the script with his husband Derek Dodge, provides a interesting format for discussion. The narrative parts of the film alternate between the points of view of two female characters in a relationship. Interspersed is documentary footage of couples discussing their partnerships. Throughout, “The Ring Thing" shrewdly allows the audience to form their opinions on the issues, by raising, not answering questions.

In the film Sarah (Sarah Wharton, who also produced) is a freelance filmmaker who is very much in love with Kristen (Nicole Pursell), a producer on a TV cooking show. In Provincetown one evening, Sarah shows Kristen her father’s ring, which she found in her mother’s house. Kristen thinks the ring being proffered is a proposal. That, however, wasn’t Sarah’s intention; she was just showing the jewelry to Kristen. Sarah, as it turns out, is wary of marriage as her parents’ divorce impacted her negatively.

To try to resolve her issues about matrimony, Sarah decides to make a documentary film about the topic. With her gay friend Gary (Matthew Connolly), who is in the process of getting a divorce from his partner, the pair interview couples about their attitudes on marriage and divorce. What results is a prismatic exploration of relationships that hopefully will change Sarah’s mind about getting married.

Salon chatted with Sarah Wharton via Skype about her attitudes towards marriage and  “The Ring Thing.”

What is your relationship status?

I’m in a long-term relationship. We have been together for five years. We’ve talked about marriage, but for whatever reason, it feels unnecessary at this point. We have questions about what it means to us. I question what would be meaningful to me if I decide to get married? What would my ceremony be like?

In “The Ring Thing,” Sarah doesn’t want to get married. She’s wary because her parents divorced. She says, “my family fucked me on the whole marriage thing.” How much do you think parents’ marriage influence values?

Sarah says that, but that’s her not wanting to take responsibility for her fear. Part of what Sarah is doing is letting go of blaming other people for her own fear. She learns to live in the discomfort of not having the answers and be willing to take a leap forward.

A lot of couples that come from divorced families say that [their parents’ divorce] hasn’t influenced their views on marriage. Or people whose parents did it wrong made them want to do it right; to make up for the mistakes their parents made. For me personally, my parents have been married for over 30 years, and have a wonderful marriage. They are still in love. I don’t know where my resistance to marriage comes from.

Kristin thinks domestic partnership will resolve some of the issues around Sarah’s health insurance. What are your thoughts on that?

Domestic Partnership was a weird interim solution and not as significant as marriage. It wasn’t a good alternative for the queer community. It may resolve some legal issues, but it doesn’t have the recognition the rest of the world. Sarah sees Domestic Partnership as separate from the marriage question. It’s a solution to the problem she has while she figures out what marriage means to her.

Gary in the film is getting divorced. Do you think there is a stigma in the queer community if folks get divorced?

Yeah, I think there’s a stigma about divorce no matter what, but especially in the queer community because they fought for this right. There is a culture within the queer community that “We have to do things better.” There’s an added pressure to do it right and live up to the “happily ever after,” and so it was understandably difficult to get divorcees on camera, because there are not that many of them —  and putting your vulnerability and the mistakes in your relationships out there is hard.

But I was so uplifted by what they said. They deflated the fear balloon for me. They talked about divorce in very practical terms. They acknowledged that a relationship is hard because both people change so much. The way in which you change is no longer compatible, so you decide to separate. There shouldn’t be shame in that, but an understanding that the best thing for the couple is to end the marriage.

What observations do you have about the factors of growth and stagnation in relationships?

I think relationships feel like a juggling act of compromise and staying true to yourself. Knowing what is best for you and coming to an agreement. I think actually what’s really difficult about a relationship is learning to be able to listen to yourself and what you need or want and moving forward and making decisions from that place. How valuable is this for me that it’s worth compromising? Is it a deal breaker or am I winning this one for me?

Communication is the only way to break through that. It takes bravery to say, “This is what I need” without putting a judgment on what the other person wants. Relationships get into trouble when communication breaks down and someone is not being honest about their wants and needs, or when judgment creates an argument rather than a discussion. It’s a push and pull between taking care of yourself and the other person.

“The Ring Thing” examines the work involved in long-term relationships. Do you think they are inherently problematic?

[Laughs.] I think long-term relationships are very difficult. I think that there is a natural ebb and flow of coming together and growing apart. Deciding to continue is deciding to close the gap when there is more distance, or giving a person time: as one interviewee in the film says, “I trust you to leave and do what you need to do and come back.”

Being in a long-term relationship for me, which has been very wonderful, is acknowledging that you need to give them space, or take space for yourself to decide what you want. That’s not an indication of failure or things going down the drain, it’s self-preservation, but an important pause to acknowledge. It’s hard to change.

Do you feel there is pressure for people in the queer community to get married now that gay marriage is legal?

I don’t think so. That’s also coming from a young perspective, I think. I don’t know what it would feel like in my 30s and 40s. That may be cultural pressure, and not specific to queer people. Because marriage equality happened, it expanded what marriage is, and the institution of marriage has evolved from a straight up business transaction to a romantic “make it what you want” ceremony. For my generation, people live together and don’t think about marriage right away.

There is a thought articulated in the film by one of the interviewees that the fight for gay marriage superseded other important issues like job discrimination and trans rights. Can you discuss this point of view?

I completely agree that everyone should have the right to marry, and there are rights and benefits to it — going to hospital and having your wife or husband sign documents for you, or in the LGBTQ community with adoption and legal rights to children. I’m glad that happened and that the LGBTQ community won. It’s interesting to me that that cause was the one that became the keystone of the movement for years, and that it may be more palatable for straights. “Love is love” is an easy thing to get on board with, whereas it’s harder to get on board with trans rights. One guy we spoke to said he can’t think of marriage until he knows what bathroom he can use. It’s amazing the LGBTQ community won the fight for marriage equality but there is still so much work to be done. Queer allies feel everyone is equal, but they still need to engage straight and privileged people to get involved with other fights for human rights.

Back to you: What are your ideas and fears about marriage?

My resistance came from cultural messaging about what marriage should be. I’ve been able to step back from that, and I can open my own mind for what marriage would be. I’m a monogamous person. It’s not the commitment, its more my perception from what it means to be someone’s wife. As a woman, you’re “owned” by them, and that marriage means the end of something — which sounds ridiculous — but movies say marriage is the end of fun or romance. I know it’s not that, marriage is the beginning of something. You have to keep it alive, but the immature part of me feels like it’s the final frontier of a relationship. Once you do think what are you looking forward to? A lot of millennials don’t quite recognize what a privilege marriage is, and the battle that was fought for the right to have it.