It's about time: The coming of a female Doctor Who is even more consequential than you thought

A female Time Lord is way overdue. But let’s take a moment to celebrate that "Doctor Who" went there at all 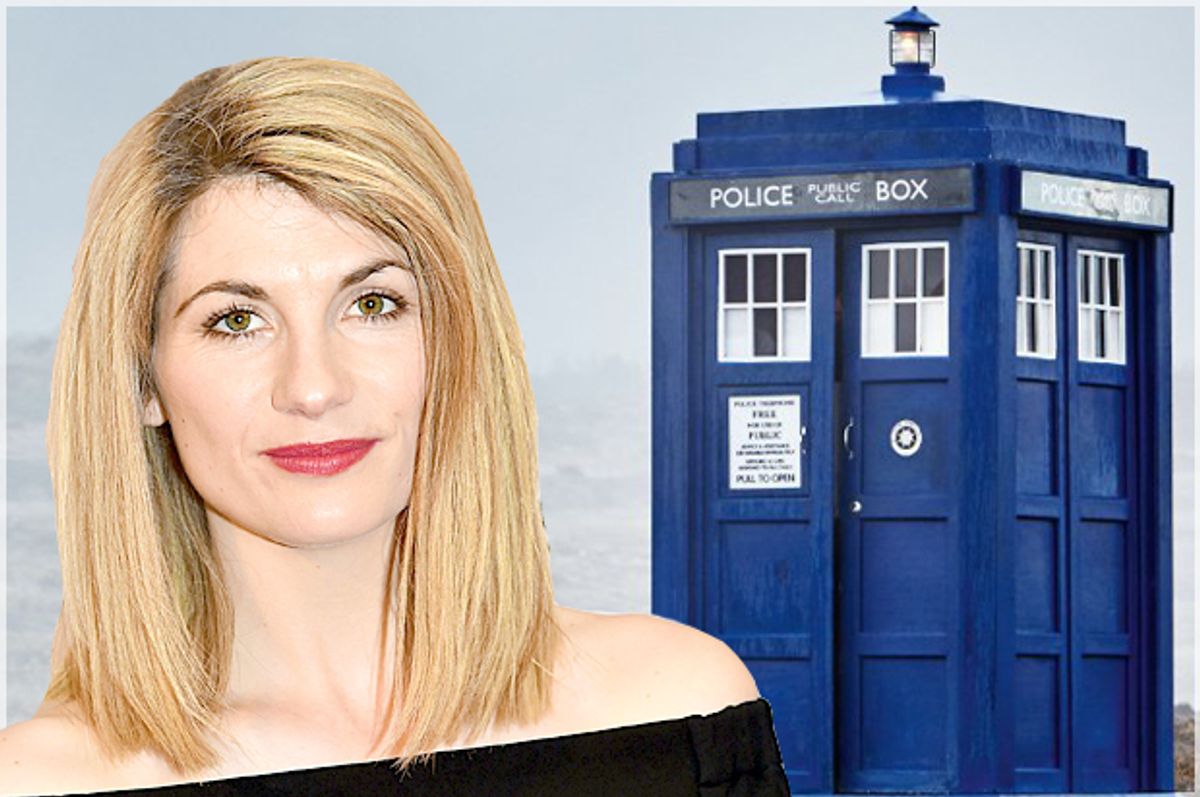 Yes, Jodie Whittaker is the perfect choice as the 13th incarnation of The Doctor, the Time Lord at the center for the long-running BBC series “Doctor Who.”

Yes, it is long past time that the series selected an actor to play The Doctor who isn’t a male. Most importantly yes, she has been selected for “the right reasons.”

There is hard resistance and soft resistance to change. Together, they form a wall; one is simply more penetrable than the other. The nerd bros flooding the BBC with enraged sexist tweets and emails are hard resistance personified. They also show up right on cue anytime an established arena opens to players who aren’t white and male.

Sadly this is typical of sci-fi fandom especially, a space filled with people frequently marginalized for their love of genre, even now that it has been thoroughly mainstreamed; a space where stories of existences positing that literally anything is possible thrive and inspire; a space filled with stories of female characters who lead rebellions, govern interplanetary alliances and helm starships. Even now the multiple ironies of nerd misogyny are lost on its perpetuators.

But soft resistance, manifesting in the form of well-meaning fans wondering whether the BBC is shoving an actress into the role to placate a fan base that has been clamoring for a female Doctor for the better part of a decade, can be damaging in its own right. Soft resistance casts aspersions upon progress in realms real and virtual; it serves as another barrier to progress.

“Doctor Who” is a fiction, and its hero is an extraterrestrial being with two hearts who travels through space and time in a police box (aka a phone booth), but such a reaction matters. Questioning whether this forward step is happening for the right reasons is the mealy-mouthed cousin of “It’s not the right time.” It may be the less sinister of the two, though, because instead of leaving people with the frustrating retort of “if not now, when?” we get to reply, “the decision has been made, so deal with it or get off the TARDIS.”

Whittaker’s assumption of the role is historic, and it also breaks a sci-fi boundary in the larger sense that the Doctor is a creature of intelligence first and above all. In science fiction and fantasy, women can have brains or brawn, but rarely both in the same package. Female logicians and scientists are usually protected by male characters. When women are endowed with physical power, it’s either explained as being part of a supernatural force or technological upgrade. Think River Tam of “Firefly” or Wonder Woman (though, for a time, Diana of Themyscira served as the Justice League’s secretary.)

When female characters are the muscle, their gender tends to be neutered. Vasquez or Ellen Ripley of “Aliens” are examples of this. The beauty of the Doctor, and Whittaker as the Doctor, is that she gets to embody supreme intelligence, gutsiness and brawn all at once and still (presumably) be female.

The Doctor is a sleuth, a bold, brave, powerful being who can only be shaken by the Universe’s greatest evils, and she — she! — does battle with little more than her wits and a sonic screwdriver. The Doctor fights for balance in the universe because she has offended the concept of cosmic equilibrium many, many times. She has a lot to clean up.

People are free to wonder aloud whether awarding the role to a woman is reactive as opposed to creative. But in doing so they should also realize that they are questioning Whittaker’s skill and ability. In positing that her gender matters more than her appropriateness for a role, they are playing into the idea that a part that has been played by different actors since 1963, each bringing unique personality traits to the role, can only be played by a man.

Here’s the thing, ladies and lads – social progress is almost always reactive. This is true in political systems, it’s true in popular culture and it’s certainly true of geek culture. “Star Trek” zealots flipped out 22 years ago when Kate Mulgrew was cast as Vice Admiral Kathryn Janeway, captain of the starship USS Voyager. Neither the world nor the Trek universe imploded, and this fall Trekkers will welcome another female Starship captain in Michelle Yeoh’s Philippa Georgiou, who will helm the USS Starship Shenzhou in “Star Trek: Discovery” on CBS and its streaming service CBS All Access.

And the successful normalization of social progress in pop culture often forwards the cause of social change in the real world. Case in point: the rise of Rosie O’Donnell and Ellen DeGeneres, then “Will & Grace,” all of whom brought portrayals of LGBTQ life into American homes via popular talk shows and prime time programs. Their success helped eased the path to marriage equality.

We vote our identity more than our self-interest, and when see ourselves in widely beloved film and television characters, we in turn see greater possibility for the world in general.

Whovians have grown more insistent that the BBC select an actress to take control of the TARDIS since fan favorite 10th doctor David Tennant left the role behind. Tennant was capably replaced by newcomer Matt Smith – the youngest actor to assume the role—and once Smith was finished, veteran Scottish actor Peter Capaldi.

Women have always played an important role of the “Doctor Who” universe, but across the decades the they’ve served as The Doctor’s platonic companions.

Current “Doctor Who” showrunner Steven Moffat, who took over for previous executive producer Russell T. Davies in 2009, was never going to make the Doctor female. Indeed, when a campaign to cast a female Time Lord hit a fever pitch after Smith abandoned the franchise, Moffat replied by casting Capaldi — a tremendous actor, yes, but also an indulgent fantasy stand-in for a showrunner who declared himself to be a super-Whovian since he was a child.

Given Moffat’s dubious track record with developing female characters in general, it may be a good thing he will not be developing the franchise’s first female Time Lord. Moffat did, however, conceive fan favorite River Song (Alex Kingston), a human with Time Lord DNA who appears throughout the series to wreak havoc and to save the day.

During his tenure Moffat also introduced female Time Lord characters to acknowledge the possibility of a Gallifreyan being a woman, a notion that should not be as controversial as it is. So in a sense, although he couldn’t bring himself to usher a female Time Lord into the “Doctor Who” ecosystem while he was at the helm, Moffat deserves credit for putting the paving stones in place for the next showrunner, Chris Chibnall, to blaze that path.

And unlike Moffat, Chibnall is the right person to shepherd a female Time Lord into existence. He worked with Whittaker on the crime drama “Broadchurch,” which he created; Whittaker plays Beth Latimer, mother of the first season’s young murder victim Danny. Because of her past work with Chibnall, Whittaker became an odds-on favorite to assume the mantle of the Doctor. Another was Whittaker's “Broadchurch” co-star, Olivia Colman.

Both women are incredibly talented. Whittaker, though, traverses a wider and more extreme variety of psychological tones as Beth. Chibnall wrote this versatility into her role, and playing the Doctor, a being who vacillates between puckish playfulness, soft empathy and stern intimidation — often in the same episode — requires that level of facility with regard to emotional dexterity.

Like I said before, Whittaker’s perfect. And yes, her arrival is overdue. Because there are so many reasons Whittaker’s casting as the new Doctor was the right choice for the BBC to make, but in the end, this is really why it matters.

If we want social change to be proactive, we need to seed that idea early and in the imaginations of our youngest. On TV we accept the idea that women can ride dragons, lead crews of starships to the furthest reaches of the universe and now defend time and space itself. That’s today. What else is possible for our collective tomorrow?