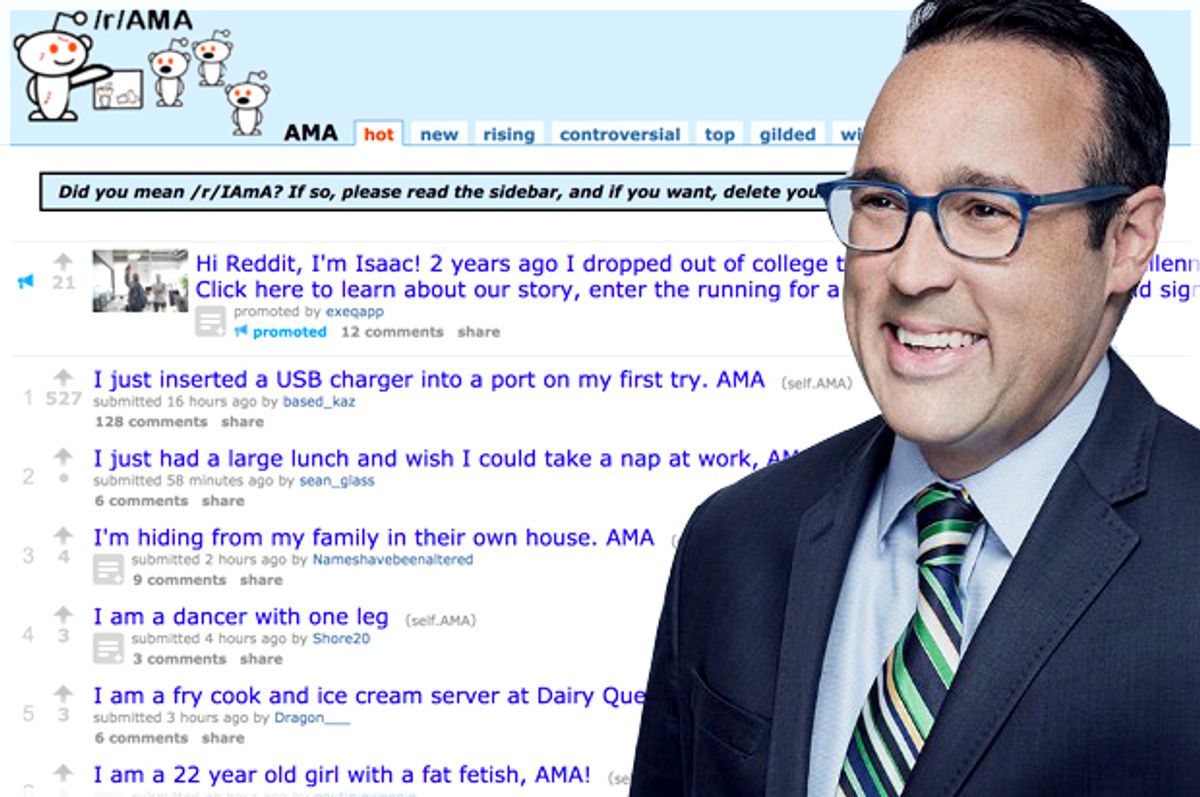 In terms of optics, CNN's Chris Cillizza is, objectively, having a really bad day. The editor-at-large volunteered to participate in a Reddit Ask Me Anything on Tuesday in which he fielded questions about his career and the state of journalism in 2017.

Cillizza has garnered notoriety over the years, in part, for founding the successful The Fix blog for The Washington Post. But it is Cillizza's reporting style, which barely covers the surface on most issues, that has enraged colleagues and media consumers alike.

His Reddit AMA Tuesday only highlighted the misgivings CNN readers and viewers have had with the journalist's style.

Reddit user LAngeDuFoyeur posed the top-rated question for Tuesday's session, asking Cillizza if he was "damaging" public discourse in America.

"Hi Chris, I'm curious as to whether or not you feel your approach to journalism can in any way be damaging to the public dialogue," the user wrote.

That wasn't even the most brutal question Cillizza had to answer.

Fusion writer Libby Watson asked Cillizza if he understood why other journalists think he "sucks."

Props to Cillizza for addressing the question:

I would first say that everyone — even reporters — is entitled to their opinion about my work. If that opinion is that it's terrible, so be it! I would add that I try like hell to be intellectually honest and fair when I am writing. I think I hit that mark most of the time. I don't hit it all the time. I am a human being. I write things where the analysis is off. I tweet dumb things. I occasionally say stuff I wish I hadn't on TV.

When that happens, I try very hard to be transparent about why I made the error, how my thought process led me to where I got and why it was wrong. I know that won't satisfy anyone. And I know it is fun for some people to call me an "insufferable hack" or something similar. That's ok. I understand that they feel that way. But I can't -- and won't -- spend my days swimming in a sea of negativity. It's not a healthy way to live.

Cillizza frequently acknowledged throughout the AMA that his analysis was not always right. But the journalist still seemed to miss the point of his critics. Cillizza continued to defend his emphasis on political theater and "horserace" journalism, even though those styles of reporting helped catapult Donald Trump to the presidency.

Luckily for Cillizza, Sen. Majority Leader Mitch McConnell, whose bid to replace Obamacare just went down in flames Tuesday, was likely having a worse day.