Trumpcare is no more, but the late-night comedians pointed out that "Trump" and "care" never went together 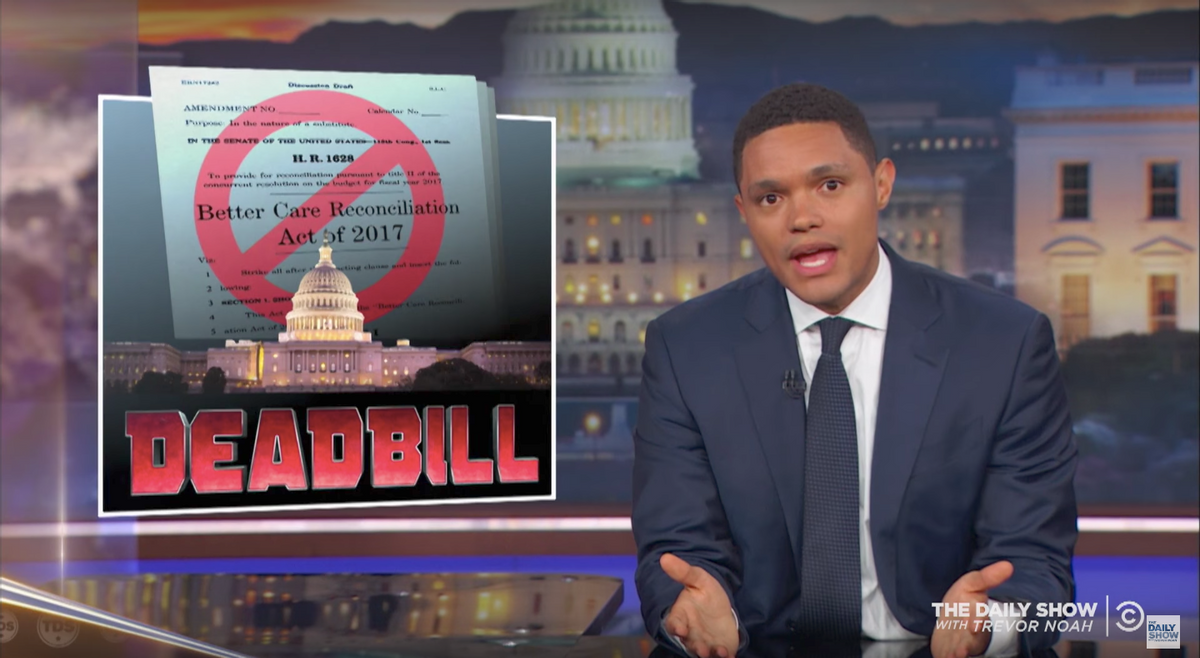 As fate would have it, Republicans miraculously failed at repealing Obamacare, despite years of promises that they would undo the law. The late-night hosts on Tuesday all covered the stunning defeat, but no one could say they were surprised.

"I don't know why we are surprised, people," Trevor Noah told his audience Tuesday night. "Let's be honest, we all knew the words "Trump" and "care" were never destined to be together. Just ask Eric."

"The Daily Show" played a montage of all the times Republican leaders declared Obamacare dead and pledged to come up with their own, better health care plan.

"Republicans have been saying forever that Obamacare was going to fail. But after years of them trying to kill it, it is somehow the only thing that is still around," Noah said.

"All of their health care plans collapsed immediately," he added. "They were like, 'Obamacare is dead. Check out our plan . . . Oh my God, plan? Wake up, plan. Wake up. Oh my God our plan won't wake up. Is there an Obamacare in the house?'"

"As of 10:48 p.m. last night, the GOP health-care bill was pronounced dead of terminal sucking," he joked to start his monologue.

"It was always a long shot because the Republicans control only all three branches of government," Colbert added. "Can't expect them to do everything."

Colbert relished the fact that Republicans could not do the very thing they campaigned on to rally their base.

"Trumpcare is officially deader than the people who would have been dead if Trumpcare had passed," Colbert said to conclude his monologue.

President Donald Trump was obviously not the only Republican who suffered a loss this week. "Late Night" host Seth Meyers reminded his viewers that Sen. Mitch McConnell, R-Ky., also deserved a large part of the blame.

"Majority Leader Mitch McConnell outlined plans to repeal Obamacare without a bill to replace. The same way we got rid of Obama without a good plan to replace him," Meyers said.

After it was clear that the GOP did not have enough votes to repeal Obamacare, Trump offered a few words on camera about their legislative failure.

"President Trump said that it was important to get more Republicans into office," Meyers informed his audience. "More? Pretty sure when the Titanic was sinking the answer wasn't more icebergs."

Jimmy Kimmel also touched on the Obamacare repeal defeat Tuesday night. He marveled at the president's response to the loss.

"Trump said today the Senate should just move on and let Obamacare fail without replacing it," Kimmel said. "It's refreshing having a president O.K. with letting his fellow Americans die just to prove his point."

Trump repeatedly called Obamacare dead late Tuesday after it was clear Congress was not going to be able to repeal the law.

"You know something is a failure when you have to keep telling people over and over again that it is a failure," Kimmel said.