Breitbart, conservatives, are ready to go to the mat for Jeff Sessions — and turn on Donald Trump

What could possibly make the president’s favorite right-wing website turn against him? Jeff Sessions 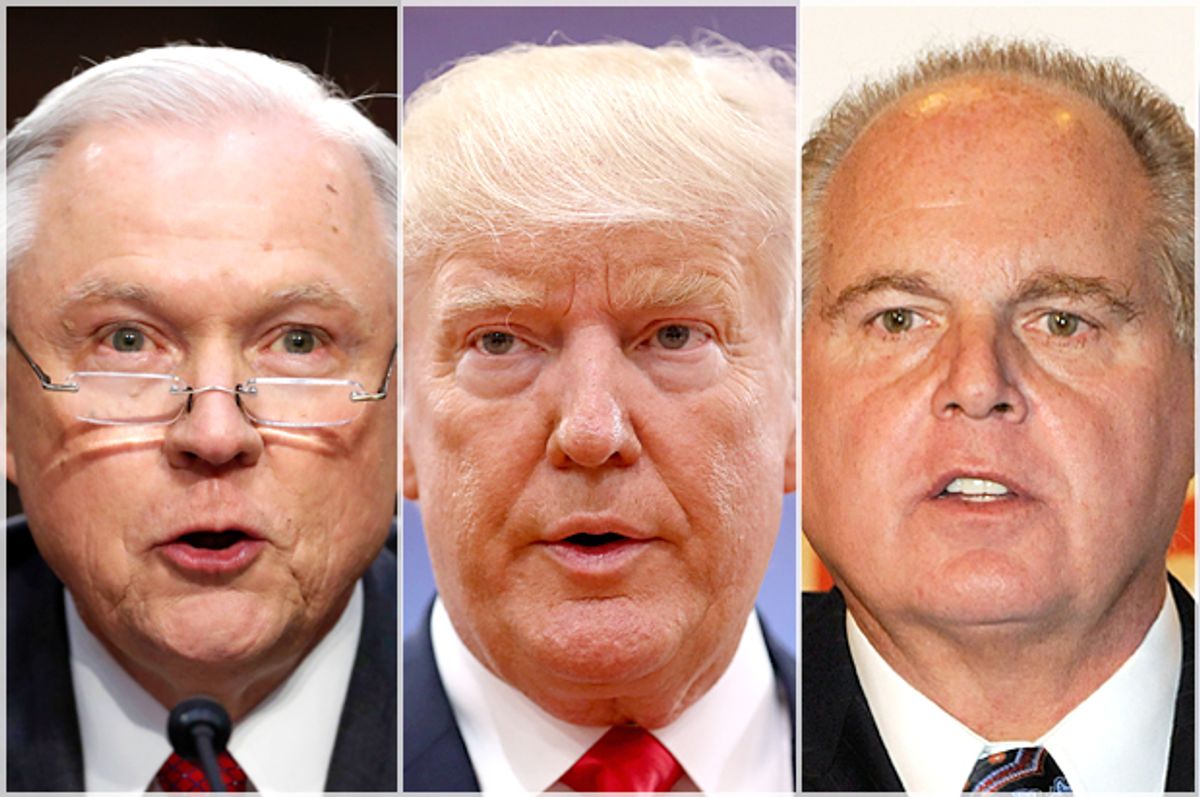 Jeff Sessions has done more than any other person, aside from Steve Bannon, to push Donald Trump’s agenda from the early days of his presidential campaign. With the “beleaguered” attorney general now coming under increased scrutiny from his own boss, the right-wing website Bannon helped to build before becoming Trump’s top White House adviser has taken a surprisingly bold stance against the president in defense of Sessions.

Calling out Trump’s “own hypocrisy,” the ultra-conservative Breitbart wrote on Tuesday that “Trump’s decision Tuesday to attack” his attorney general “is likely to fuel concerns from his base who see Sessions at the best hope to fulfill Trump’s immigration policies.”

As both his son and son-in-law face Congressional questioning about possible ties to Russian officials, a seemingly panicked Trump has tormented Sessions with targeted Twitter tirades for two days in a row. On Monday, Trump called his attorney general "beleaguered" and on Tuesday, Trump said Sessions had "taken a VERY weak position" on investigating his Hillary Clinton over her use of a private email server. “So where is the investigation A.G.,” Trump asked.

The president is angry that Sessions recused himself from the federal investigation into possible collusion between Trump's election campaign team and Russia. His Twitter rant comes after Trump told the New York Times last week that he would not have hired Sessions had he known he would recuse himself from the Russia investigation. The White House’s newly named communications director compared Trump’s strained relationship with Sessions to a divorce on Tuesday.

But as the website formerly ran by Trump’s top adviser argued, “Trump himself was the one who flip-flopped on whether to prosecute Clinton.” Breitbart politics reporter Adam Shaw wrote that “Trump’s base reasoned that they would rather have a border wall than Hillary Clinton prosecuted. But now they may end up with neither.”

As Breitbart correctly noted, Sessions, a former prosecutor, has worked hard to dismantle the criminal justice reform implemented by the previous administration. He’s threatened to withhold federal funding to so-called sanctuary cities and has focused on intercepting undocumented immigrants at the U.S.-Mexico border, already visiting twice.

According to reporting from Politico, Breitbart’s shocking rebuke of Trump is in line with Bannon’s current thoughts on the controversy. Citing an unnamed “senior White House aide,” Politico reported Bannon “has emphasized that firing Sessions is a risky move that would cast the White House in a negative light and potentially unleash a political disaster.” Bannon, of course, is such a fan of his “mentor” Jeff Sessions that he first encouraged the former Alabama senator to run for president before joining the Trump campaign.

“It’s also a little bit discomforting, unseemly, for Trump to go after such a loyal supporter this way,” Limbaugh said on his radio show Monday, calling Sessions a “by-the-book” attorney general.

Also on Monday, former House speaker and Trump whisperer Newt Gingrich attempted to use Fox News to provide the president some political advice. “Anybody who is good at team building would suggest to the president that attacking members of your team rattles the whole team,” Gingrich said. For his part, Sessions has still shown no public signs that he plans to step down, even as Trump’s most sycophantic supporters in the media continue to criticize the attorney general’s recusal from the Russia investigation.

“I don’t know where Jeff Sessions is, maybe something’s happening that we don’t know about,” Sean Hannity complained on his show on Monday. “I’m like, OK, we have a new attorney general, statute of limitations have not gone anywhere,” Hannity added. “Why isn’t this woman being investigated?”