Sean Penn directs "The Last Face" like it's his last chance 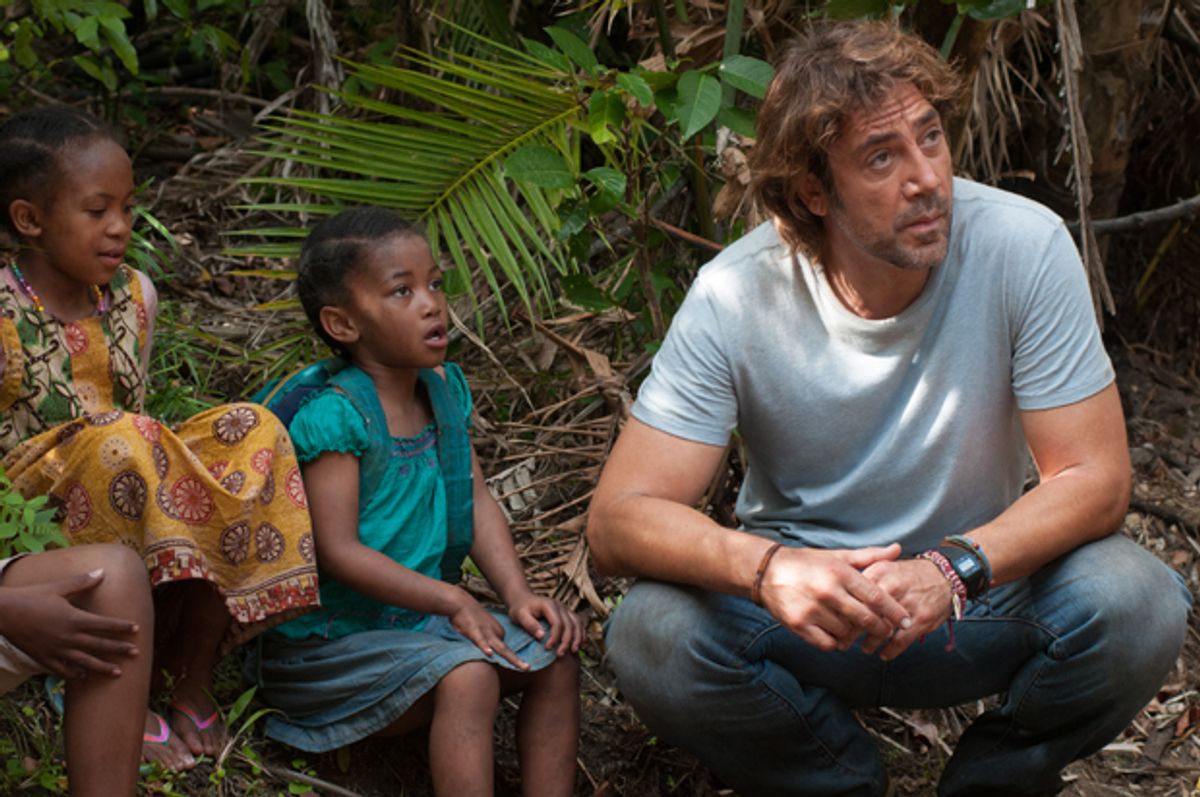 The seven extremely pretentious minutes that comprise the pre-credit sequence of director Sean Penn’s ambitious romantic drama “The Last Face,” are practically a warning to audiences about the badness to come. These scenes, full of didactic dialogue by writer Erin Dignam, are so heavy-handed and execrable, that it requires a fortitude perhaps only found in the African relief aid doctors that are the subjects of this film to get through all 130 minutes without wincing.

“The Last Face” opens with text over a map of Africa that describes “corrupted innocence” and “the brutality of love between ... a man ... and a woman” (ellipses theirs). Then there is a discussion between Miguel (Javier Bardem), a doctor, and Wren (Charlize Theron), a South African director of Medecins du Monde, the international relief aid agency her father founded, about a concert to raise awareness for the crises in Africa. Miguel wonders why entertainment is needed to make people listen. Wren responds, without irony, that the concert “reminds them what human nature is capable of.”

Then Penn borrows from Terrence Malick’s playbook. A ticking clock sounds, hands are embraced, a tear falls, and other impressionistic images follow: lantern balloons float through the night sky, a voiceover talks about saving the world. There is the concert, which includes an elaborate onstage sand painting, and a quote proffered from one of the Brontes. Viewers should away in droves.

“The Last Face” is the worst kind of good-intentioned noble failure, one that muddles its message because it tries too hard to tell it. Penn rubs the audience’s nose in graphic medical procedures or scenes of bodies wounded from being used as human shields, covered in flies as Wren retches at the horror. Penn displays faces of tearful African children so often one expects Sally Struthers to interrupt the action with an impassioned Christian Children’s Fund plea. (And if she did, it would be subtler). Penn even has his son Hopper Jack Penn, playing a character named Billy Boggs, telling Miguel that the African woman Miguel danced with was “raped from vagina to anus, but she’s dancing!” as if to emphasize the remarkable resilience of the suffering Africans.

That scene actually gets worse, and the film gets much worse. There are confusing rebel attacks (rebelling against what?) shot with slow motion and played out in silence. There is a scene in which Miguel hands an earbud to a recovering African patient, telling him the Red Hot Chili Peppers “is the best medicine.” Later, the same RHCP song, “Otherside,” is used in a comic sequence where Miguel traps Wren’s head in the window of a moving car before they stumble upon rebel war atrocities.

Penn does not seem to know how to shoot the action scenes. A roadside ambush in the rain should be urgent and stressful, but it feels contrived; it lacks power and emotion. Likewise, an emergency C-section of a woman with a neck wound — performed at night with only helmet lamps — should be intense, but Penn’s nose-rubbing approach makes it simply unpleasant.

The filmmaker is no better with the love story. Miguel’s big seduction of Wren may be one of the goofiest moments in this or any film. The lovers vigorously brush their teeth while staring at each other through a beaded curtain. It gets downright ridiculous, and unsexy, when they start gargling.

“The Last Face” toggles back and forth in time as Miguel wants to deliver a letter to Wren about their relationship. She is reluctant to read it and gives him the “You don’t LOVE me! You don’t KNOW me!” speech. His impassioned response — done with Bardem’s seductive blend of charm and conviction — is accompanied by a boisterous soundtrack that dilutes any involvement with the characters. Miguel and Wren are symbols, not people. She is the daughter of privilege, wrestling with her father’s ghosts and her mother’s affairs. He is an orphan who put himself through medical school. So much for backstory. Let’s move on to the love triangle.

In what may be the most head-scratching moment in the film — and that is really saying something — Wren’s French cousin Ellen (Adèle Exarchopoulos) drops a pair of bombshells on the couple that are potentially devastating. It would spoil the drama to reveal the detail, but suffice it to say, it involves a major heath issue of concern to African populations (and the rest of the world). It also gives the film another Big Important Message with which to cudgel viewers. Perhaps this subplot was included because Penn and Dignam didn’t want to leave anything out. It’s pretty clear this film isn’t getting a sequel.

“The Last Face” hoovers up every issue it can in an effort to ask the question, is aid to war-torn foreign countries valuable at all as long as there is no solution to the fighting (Insert Middle East parallels here). The film presents various sides of this argument — that it is futile to help; that announcing that aid is pulling out still raises awareness; that it is essential to be there regardless of what gets done — but because it is so preachy audiences are not required to think or decide for themselves. Even when a situation develops where there is only enough blood for one of several patients and someone decides to “play God,” viewers are spoon-fed the answers.

The film’s climactic dramatic moment is even further beyond the pale. This scene, which involves a child being corrupted by rebels who force him to abuse his father, ends with such an over-the-top melodramatic moment, that the martyrdom allegory Penn and Dignam have been (over)reaching for falls way short into bathos-land. The “tragedy” of this finale feels more like relief in that it signals the film will soon be over.

Though not before Wren’s impassioned public speech about war, poverty, natural disasters, and disease attacking the dreams of African lives in particular, and the rest of the world in general. Cue Cat Stevens’ “Peace Train” playing on the soundtrack.

“The Last Face” goes for emotional broke whenever Penn can; the result is vertiginous. He features swirling cameras as he documents the horrors of war-torn Africa. He includes images of over-emoting actors that look like they should be magazine ads. He features on-the-nose songs by Eddie Vedder and Mary J. Blige, among others. But most egregiously, the black, African bodies are used to show suffering while the white characters yet again act as their saviors.

The road to hell is paved with good intentions, and “The Last Face” is a six lane highway, directed by Sean Penn.