Hail to our flounder in chief

Six months the Trump administration and the narcissism, prevarication and corruption have our democracy in crisis 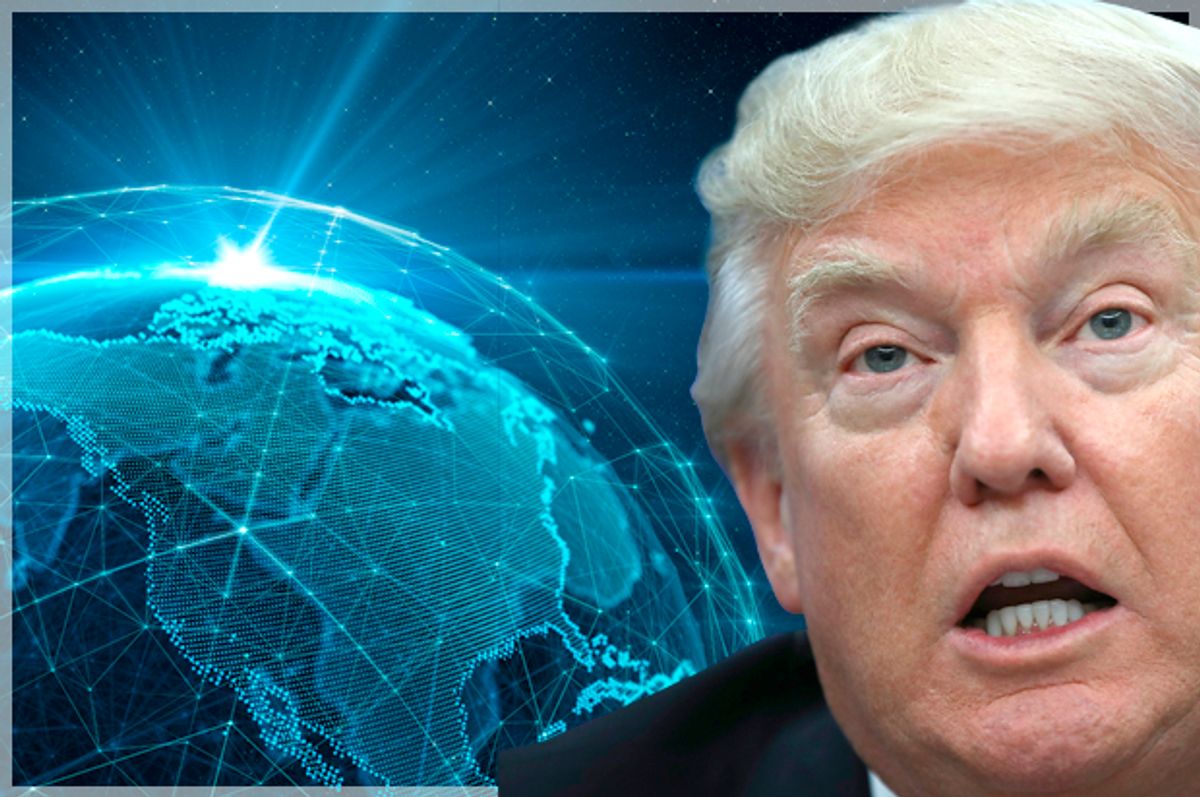 Fish stinks from the head, as the ancient Greeks first said, and right now there’s a 250-pound flounder stinking up the White House and all those around the place.

“Everybody, I can honestly say, with rare exception, who has been associated with this administration and this president has been diminished by it. Their reputation has been tarnished. They’re smaller people as a result of it. And that’s tragic.”

Six months in and we’ve reached a level of mayhem, compulsive lying and incompetence that defies the imagination. Just to mix the animal metaphors, there’s more bull running through Washington right now than the streets of Pamplona, and for our nation’s capital, that’s saying something.

Or, in the words of the British actor and veteran Ernest Thesiger, when asked to describe what it had been like on World War I’s Western Front, “The noise, my dear, and the people!”

Havoc rules. And did I mention the whining? Snowflake Donald Trump should change his entrance music from “Hail to the Chief” to “Poor, Poor Pitiful Me.” Everything that happens is someone else’s fault while the real culprit is staring out at him from the bathroom mirror every morning.

By now, of course, we were supposed to have repealed and replaced Obamacare, instituted vast tax cuts and begun rebuilding America’s infrastructure. And I’m still waiting for my rocket belt and flying car.

This is not to ignore the gruesome deregulatory chainsaw being put to government departments and agencies, but legislatively this administration is a flaming train wreck.

While simultaneously claiming great lawmaking accomplishments, Trump falsely argues that what’s holding everything up is obstruction from Democrats, and certainly there has been some Dem-instigated, strategic slow walking that has impeded GOP activity in Congress, such as it is. But far more grievous are the self-inflicted wounds of incompetence, inattention and infighting that have turned the capital into Pork Chop Hill.

And Russia. Trump and his campaign team’s possible involvement with the Russian government and election tampering has created major roadblocks at both ends of Pennsylvania Avenue, diverting huge amounts of time and attention.

The White House is on a war footing, seemingly determined to prove that the rule of law does not apply to Trump, his children or associates. Meanwhile, Congress is enmeshed in hearings and Russia-related maneuvering. All of this while the investigation by special counsel Robert Mueller and his team of prosecutors quietly hums along — even though it’s about to be subject to an even greater onslaught of mudslinging and disruption as Trump may try anything to tear it apart through legal challenges and firings.

To repeat the question over and over: What is he trying to hide? Getting to the truth of what happened is important, not just because of what it says about the amorality of this administration but also the devastating attack Russia has attempted on our democracy, part of a pattern of interference that has been perpetrated against European democracies as well.

Not to give a gratuitous plug to my place of employment, but the extent of the scandal is best seen in the stunningly thorough and quite brilliant timeline that has been assembled at the BillMoyers.com website by law professor and former litigator Steven Harper with the assistance of our editorial staff.

It’s a jaw-dropping overview that demonstrates how truly deep and longstanding this scandal may go, so much so that at Politico, former Watergate assistant prosecutor Nick Akerman recommended it as “the most enlightening thing you can possibly read… the best source out there on this stuff.”

But for this moment, let’s focus on just a couple of recent developments that suffice to show that much is rotten in the state of Trump.

First, there’s that New York Times interview Trump granted last Wednesday, a cross-examination that for sheer inarticulateness and borderline madness rivals The Caine Mutiny’s Captain Queeg clacking away with his ball bearings and muttering about the crew stealing strawberries.

The Times’ David Brooks said it demonstrated “a disturbing level of incoherent thinking,” which is putting it mildly. The president is like a one-man game of Telephone: he hears information from wherever or whomever but when he repeats it back, the facts are thrown in the air and come down as surrealist jabberwock.

Thus, Napoleon Bonaparte, Trump thinks, “ . . . his one problem is he didn’t go to Russia that night because he had extracurricular activities, and they froze to death.” Huh? As for health insurance, “ . . . you’re 21 years old, you start working and you’re paying $12 a year for insurance, and by the time you’re 70, you get a nice plan.” Where would that be, the Planet Mongo?

In truth, much of the interview was far more sinister than his garbled, incomplete sentences: thinly veiled grumblings and threats about Attorney General Jefferson Beauregard Sessions, whose recusal from the Russia probe was, Trump argued, “very unfair to the president;” special counsel Mueller and his staff — rife, he believes, with “conflicts of interest;” Deputy Attorney General Rod Rosenstein; and former FBI Director James Comey. By firing Comey, the president said, “I did a great thing for the American people.” Meaning a great thing for I, Donald Trump.

Or so he seems to think. “I’m not under investigation,” he insisted. “For what? I didn’t do anything wrong.” Yet the very next night after the interview, both The Times and The Washington Post reported on efforts by Trump to “limit or undercut” the Mueller investigation and ongoing discussions of presidential pardons for “aides, family members and even himself.”

These latest alleged moves by Donald Trump and the legal team assembled feel like the kind of maneuvers fashioned by a crime boss when cornered by his own lies. And while the principle of innocence until guilt remains paramount in a society still deemed to be free, every action they take in the Trump/Russia case feels more like obstruction than any attempt to build a solid case for the defense.

For them to argue that some political donations to Democrats by members of Mueller’s staff are conflicts of interest and reason for recusal is rich enough, but coming from a gang that has embraced unlimited campaign contributions from big business and the wealthy as free speech is almost as ironic as a bunch of self-described nationalists and populists reaching across the oceans and steppes to sacrifice sovereignty and endorse the philosophy of a tin-hat Russian despot.

Also risible are claims that Mueller should recuse himself from his Russia probe because he once disputed his membership fees at a Trump golf course (a charge a Mueller spokesman denies).

Illogic and yes, madness. “ . . .  [A]ll agree the US president has the complete power to pardon,” Trump tweets, as his lawyer Jay Sekulow runs to the Sunday talk shows saying there will be no pardons because, hey, there is no wrongdoing to pardon.

But which is worse, the ranting nature of the president’s febrile brain, the posturing of his lawyers or the spinelessness in his Cabinet and the GOP? As several have suggested, much of this nonsense might be curbed if Republican congressional leadership simply said if you try more firings to stymy the Russia inquiry or start issuing pardons like Kleenex, impeachment proceedings immediately begin. So far, silence.

You have to ask them, are your jobs and personal ambition so overwhelming and important that you’ve abandoned courage and responsibility? As you debate what’s legal versus illegal, have you completely lost sight of what’s morally right or wrong?

Every time you pledge fealty to this man, an angel loses its wings. Meanwhile, the smell of fishiness at 1600 Pennsylvania Ave. grows ranker by the minute.