A modern-day Beatles vs. Stones?: Why people love arguing about the merits of R.E.M. vs. U2

In your heart, you know who is better 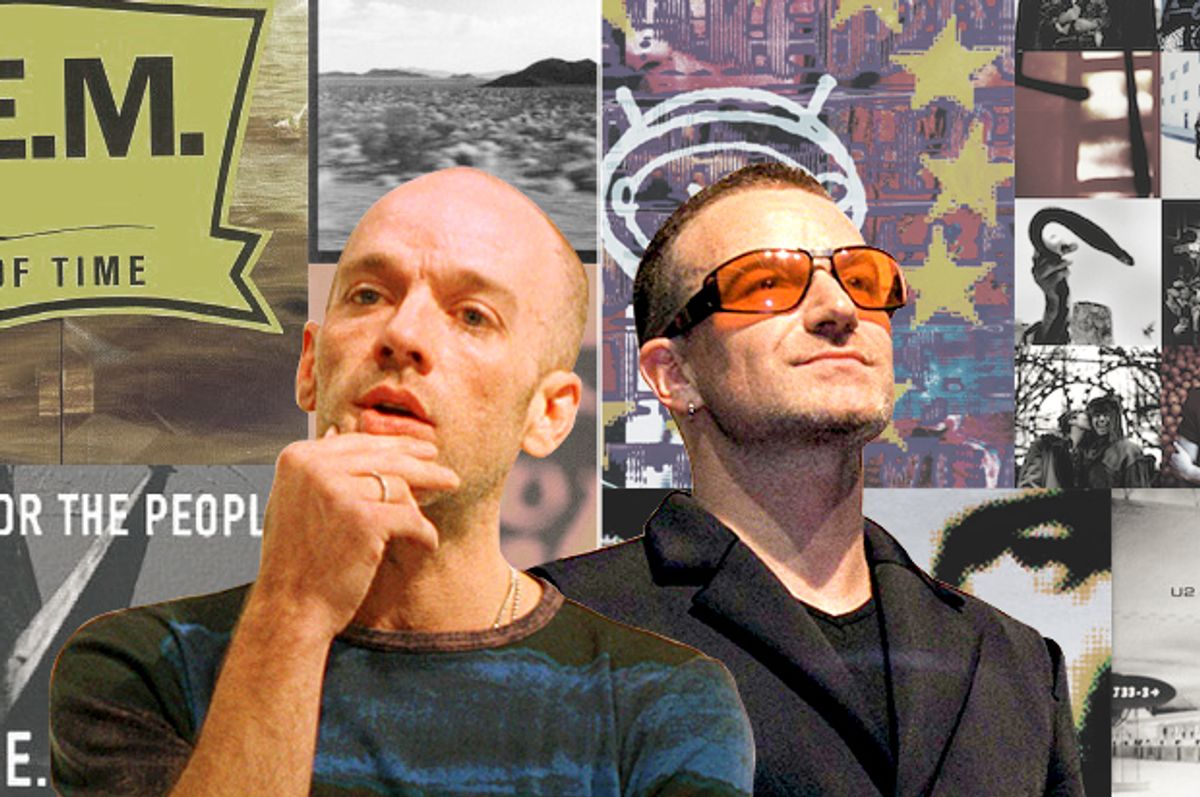 It's safe to say that Arcade Fire's latest album cycle has provoked outrage. Throughout the lead-up to the release of a new LP, "Everything Now," the band has drawn the ire of fans and foes alike with parodies of fake news sites, mock-ups of music websites and a pretend corporation supposedly controlling promotional content such as a re-recorded BBC theme song. This is (ostensibly) all part of what's meant to be ironic commentary on modern society and how the line between art and commerce has blurred, although the campaign has mostly led to confusion and cynicism.

It should be no surprise Arcade Fire's promotional gambits have attracted controversy. After all, the most contentious online debates (besides politics or religion, of course) involve music-related topics. Take the vinyl boom. Buying records is fun, right? Not necessarily: Topics such as pricing, sound quality, Record Store Day and whether the revival is fading frequently spawn heated, lengthy discussions. Arguing about the merits of lead singers opens another can of worms: Woe to the person who poses the question, "Was David Lee Roth or Sammy Hagar the better lead singer of Van Halen?" without having hours available to moderate a flame war.

Comparing and contrasting R.E.M. and U2 also remains a lively topic of online conversation. On the surface, it's easy to see why people have found this a vital discussion for decades now: To several generations of music fans, the two groups were akin to the Beatles and the Rolling Stones -- rock bands who transformed culture via powerful art. Passionate art, of course, produces passionate fans — and liking U2 and/or R.E.M. signaled that you stood for something and looked at the world through a specific lens.

These lenses didn't always overlap: For numerous reasons, Bono and co. were and are a polarizing presence that attracts plenty of vitriol. However, U2 and R.E.M. do share somewhat parallel career arcs and aesthetic influences. Both groups are deeply inspired by Patti Smith and the Velvet Underground, as well as the visual work of Anton Corbijn, and prioritize sonic integrity and sincerity. Both bands were (and are) politically minded and represent the activism-oriented, principled bent of the 1980s, the same decade each connected with increasingly larger audiences.

From a sonic perspective, both spent the '90s pushing their sound forward. R.E.M. released the orchestral "Out Of Time" and elegiac "Automatic For the People," cranked up the volume and electric guitars on "Monster," and then went in lush, expansive directions with "New Adventures in Hi-Fi" and "Up." U2, meanwhile, applied several coats of irony and mystique to their approach upon the release of "Achtung Baby" — a record filled with buzzsawing guitars and sinewy grooves — and dabbled in electronic textures and dance culture for "Zooropa and "Pop."

Throughout their respective careers, both bands also used live concerts to enhance artistic expression. R.E.M.'s recently reissued "Live at the Olympia," a record that documents the 2007 concerts the band spent woodshedding new material at a theater in Ireland. U2, meanwhile, has been trying out a new song, "The Little Things That Give You Away," during the encore of select "The Joshua Tree" dates. That tour, for the record, is being heralded for its cutting-edge screen and projections.

Despite all of these similarities, both bands diverge in several significant ways. The obvious one is that R.E.M. broke up in 2011, while U2 has continued to tour and work on new music. However, while still extant, the former continued down a sonic path lined with reinvention, culminating in 2011's "Collapse Into Now," a distillation of the band's influences and strengths. R.E.M. never made the same record twice.

U2, meanwhile, toned down its brazen experimentation and went to a more back-to-basics sound starting with 2000's "All That You Can't Leave Behind." That didn't mean the Irishmen also didn't try to push themselves forward — 2009's "No Line on the Horizon" featured more atmospheric electronics in spots, courtesy of Brian Eno and Daniel Lanois, while 2014's maligned "Songs of Innocence" hasn't received a fair shake for its depth — but the formula-tinkering occurred within a familiar, safer framework. As a result, it's far easier to hear echoes of U2's groundbreaking work in its modern sounds.

What it comes down to is that U2 and R.E.M. fandom isn't an either/or proposition: Each group has its strong and weak albums; curveballs that people liked (and ones that they didn't); and assessments and preferences that vary depending on personal tastes. As each group evolved, their music slowly accumulated disparate influences, nuances and experiences, which facilitated even more differentiation. For these reasons alone, placing the two bands against one another is inherently silly.

Yet, on a deeper level, the endless U2 vs. R.E.M. debate is a byproduct of the way people relish playing devil's advocate, as well as society's bizarre fascination with pitting artists against one another, regardless of whether the pairing is based in reality. After all, unlike the Beatles and the Stones — whose alleged rivalry is muddied with twists, turns and uncertainties — R.E.M. and U2 aren't and were never at odds. Its members played together in a collaboration dubbed Automatic Baby for MTV's 1993 Inaugural Ball for President Bill Clinton. More recently, R.E.M. shared a New Yorker story about U2 fandom on its Facebook page, and called the band a "great bunch of Irishmen!" In fact, Questlove even Instagrammed a video of Michael Stipe and Patti Smith having a blast at a recent U2 tour stop.

With such rock band comparisons, rankings tend to be heated and (mostly) in good fun, (except when talking about Bruce Springsteen or Bob Dylan, two acts whose canons are untouchable to many). But calls to determine what's "the best" or "the greatest" bring out the competitive edge in people. Fans want to defend their beloved art because it's an extension of who they are and what they stand for. Rationally, someone saying that R.E.M. is better than U2 (or vice versa) is personal opinion. But to someone who has years of fond and meaningful memories associated with the slighted group, it can feel like a stinging personal affront.

What's amusing about the U2 vs. R.E.M. argument is that there is no clear endgame. Vocal U2 haters — and, again, this is a large population — likely won't have their minds changed. People who think R.E.M. wasn't the same after a certain milestone (leaving I.R.S. Records, say, or post-Bill Berry) also generally aren't swayed by debates. The U2 vs. R.E.M. argument isn’t one where someone can declare a clear "winner" or "loser" because there simply isn’t one; there are too many variables at stake. Perhaps that's the whole reason why the argument endures: There's no tangible metric to determine who's better, so all people can do is stake their claim on a side and dig in their heels.