Why I work myself to death

The reasons why we overwork ourselves can be social, economic or cultural. For me, it's rooted in ableism 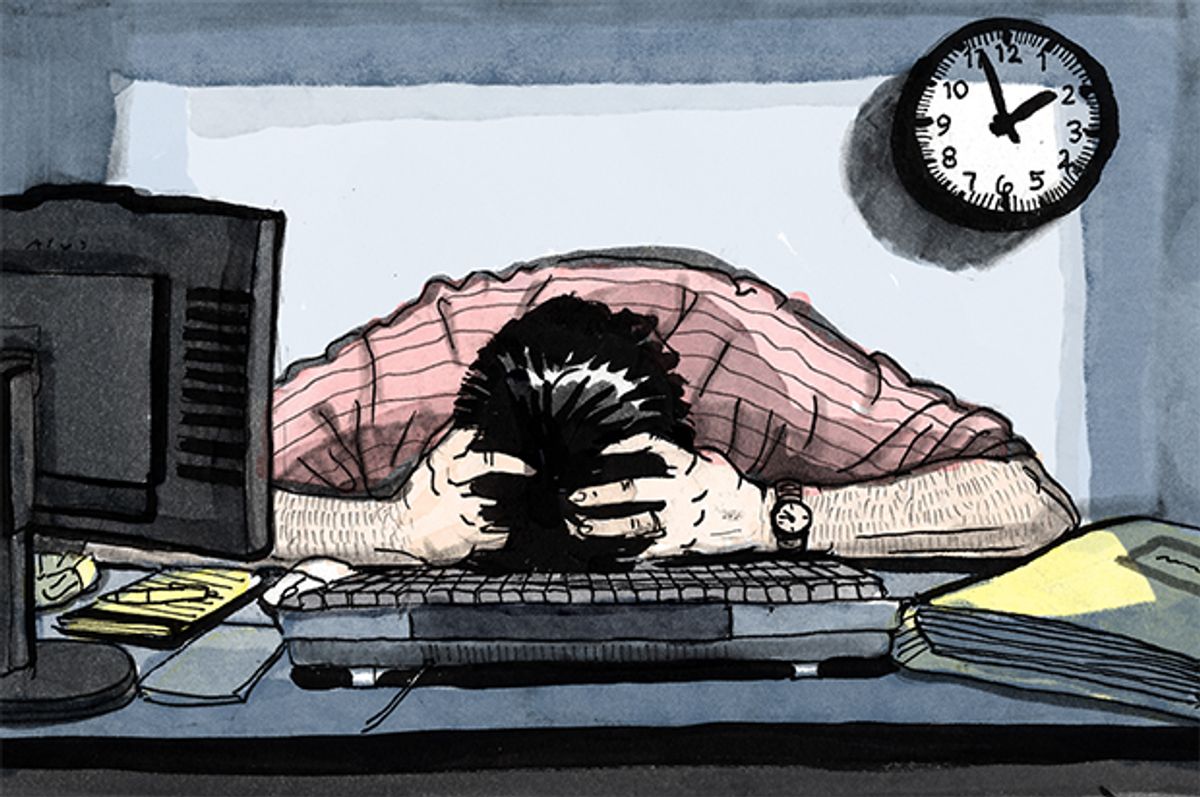 If you want to understand why Americans work too much, you should always include our abuse and overuse of the term "lazy" in that conversation.

Studies regularly find that Americans are among the most overworked peoples in the industrialized world. A survey by Staples in 2015 discovered that more than half of all Americans (53 percent) are burned out and overworked, while another study found that the average European works 19 percent less than the average American. Despite these trends, however, Americans continue to retire later and reduce their vacation time.

Obviously much of this has to do with the worsening economic conditions we've faced since the onset of the Great Recession in 2007. What can't be explained by contemporary economic conditions may be accounted for in our cultural ethos, as the legendary sociologist Max Weber illustrated in his classic book, "The Protestant Ethic and the Spirit of Capitalism."

Yet when I turn to my own experience — and as a writer who has developed a reputation among his colleagues as a "machine," I can't broach this subject without looking inward — I find that there is an additional explanation. It is rooted in my experiences as an autistic individual. I suspect it is one with which most people who have struggled with disabilities can identify.

See, when you are neurologically atypical, the world tends to dismiss you as "lazy."

In my case, I can trace it back to the innumerable teachers who saw me struggle with focusing or organizing my work and would scold me for my perceived laziness. My third-grade teacher used to force me to do my homework during recess and lecture me about how if I just stopped being lazy, she'd allow me to play with the other kids outside.

As an adult, even after I had developed my own methods for pushing through these obstacles, I would still encounter people who insisted that when I discussed being autistic, I was really just doing so as an excuse for laziness.

The epithet wasn't reserved solely for teachers. Many employers reflexively perceive individuals who struggle with invisible disabilities as lazy or incompetent. Even the father of one ex-girlfriend used to regularly yell at me with the line, "I'm tired of hearing about autism! Just learn how to do some hard work!"

Like a lot of people I know who aren't neurologically privileged, I reacted to this by pushing myself extra-hard to prove my value. My co-workers, girlfriend, friends and family like to joke that I'm a workaholic, but it really isn't as simple as that. I'm just terrified that one day all of the progress I've made will count for nothing and that damnable l-word will be applied to me again.

I'm not alone in feeling this way. Some of the most brilliant minds I've ever known from high school and college have been unable to realize their potential because their own learning disabilities have caused them to be labeled as "lazy." Very often, the response to years of being dismissed as "lazy" is to internalize that description. These individuals, despite being almost heartbreakingly intelligent, wind up squandering their potential because they figure that if society has already rendered its verdict on them, why bother trying?

Even the ones who are working in professions that utilize their potential still struggle with the onus of being perceived as lazy. I know graduate students who admit that they have trouble focusing and pump their bodies full of stimulants so that their peers won't notice them daydreaming and start snickering at their "bad work ethic."

I suspect that many of the people reading this — particularly the ones who had enormous potential to excel in certain lines of work but never quite managed to do so — grappled with internal problems of their own that caused them to eventually give up. Then, on some level, they convinced themselves that this was because society was right about them, and they were just too lazy to deserve success.

And, of course, it is impossible to be thorough in covering this subject without acknowledging the racial connotations behind the term "lazy" as an epithet. A recent survey found that 42 percent of white Republicans and 24 percent of white Democrats viewed African-Americans as lazier than whites. Likewise, it is hardly a coincidence that President Donald Trump once claimed that "illegal immigrant households receive far more in welfare benefits."

There are three lessons here.

First, When you are labeled as "lazy," society isn't just saying that you have a mild disinclination toward hard work. The implication is that you are worthless, a mooch, a bum, someone who refuses to pull your own weight.

In addition, I'm not implying that laziness doesn't exist, but rather that the term should only be used on individuals who make a deliberate choice not to apply themselves to their work. If someone is trying to work and struggling with it, they may be indeed working harder than most people. To argue otherwise is ableist and ignorant.

Finally, we as a society need to start developing more sophisticated methods for understanding the science and art of working aside from the primitive rubric of "lazy" or "not lazy." As psychologists and neurologists learn more about the workings of the mind, we are increasingly aware that there is an incredibly broad spectrum of cognitive processes out there. Not all of them are readily adaptable to the demands of early 21st century working life, but that doesn't mean they don't have the potential to do so.

By developing compassion and helping people who clearly want to work but struggle with doing so, we can create a culture that is not only kind to the disabled, but strengthens society as a whole by empowering everyone to do their absolute best.

Ironically, continuing to ignore this practical and moral imperative by bandying about the word "lazy" isn't just wrong. It is, in its own right, lazy.