Gingrich smears the DOJ's mission as a leftist vendetta 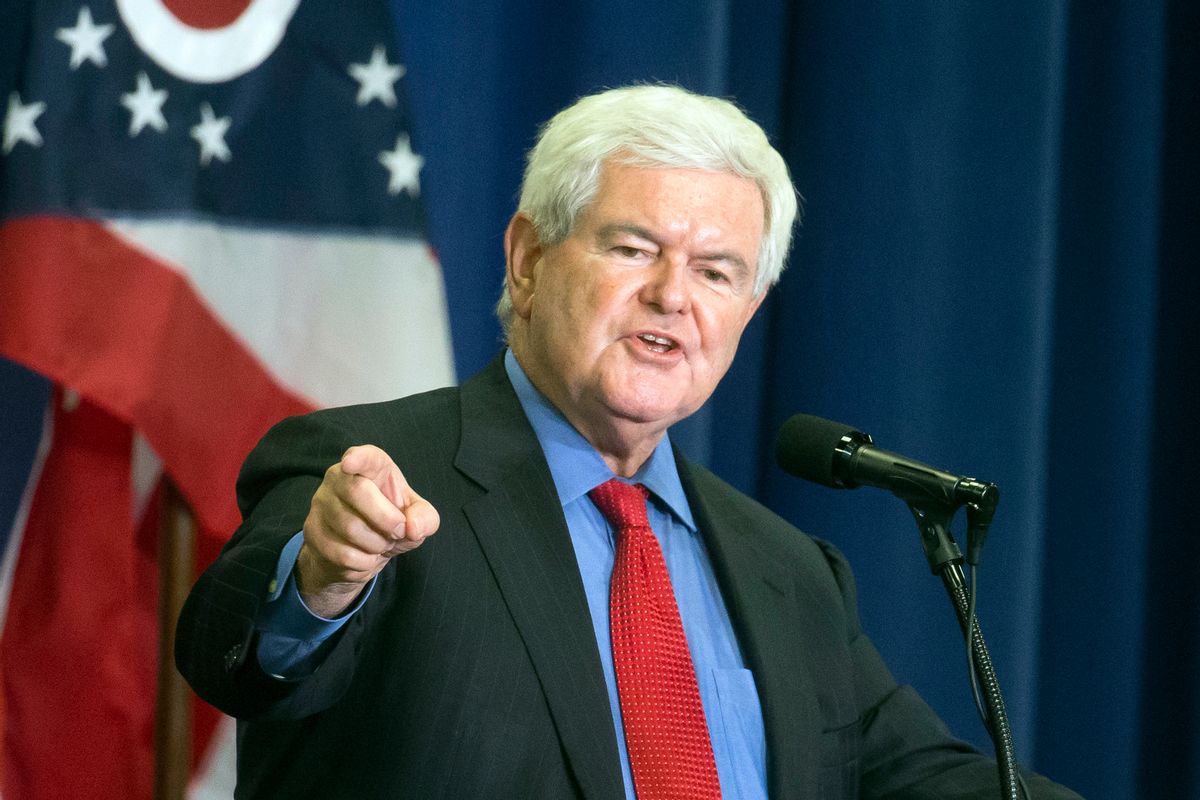 The Trump administration, which has been caught lying hundreds of times and continues to ceaselessly attack the media, sunk to new lows Tuesday as former GOP House Speaker Newt Gingrich launched an attack worthy of Nazi propaganda chief Joseph Goebbels.

Gingrich, who has never shied away from verbal jousting, held forth on NPR’s Morning Edition in an outrageous, eight-minute attack on the federal Department of Justice, smearing the DOJ as a “left-wing” institution bending laws and abusing its authority to destroy lives. He said the lawyers who are overseeing the special counsel investigating the 2016 Trump campaign’s ties to Russia are all Democrats, as evidenced by donations to institutions supporting that party.

Gingrich glossed over the fact that special counsel Robert Mueller is a Republican — as NPR host Rachel Martin interjected — and countered that the DOJ is filled with Trump-hating career staffers. He said Mueller’s first hires included lawyers who were “killers,” predicting they would stop at nothing to convict Trump associates of fake crimes.

Gingrich's assault did not merely seek to delegitimize the ongoing investigation of the Trump campaign’s ties to Russia — which may bleed over into Trump's business deals with Kremlin-connected Russians. It was also an attack on the DOJ’s mission, writ large, which includes enforcing anti-corruption laws — which Gingrich fully knows, being the first Speaker of the House ever fined while in office for ethical breaches ($300,000 in 1997).

While Gingrich plays the part of the loyal foot soldier to Trump, his attack fits the administration's pattern of seeking to delegitimize critics in the press and the government who do not embrace Trump’s far-right agenda. Gingrich's attacks intentionally distort the DOJ’s mission, the basis of Mueller’s role and the legitimacy of the Trump-Russia probe. The purportedly anti-Trump lawyers he names all have Jewish surnames. Gingrich is vying to be Trump’s attack-dog minister of propaganda. Goebbels would be proud.

Gingrich opened his attack by attacking the DOJ as a bastion of leftists, offering proof via guilt by association, which could be seen, he said, by the vast majority of their presidential campaign contributions going to Clinton.

“The Justice Department is an extraordinarily left-wing institution,” Gingrich began. “Ninety-seven percent of its donations went to Hillary Clinton. It has an embedded bureaucracy, which was captured very, very well by Sidney Powell in her [2014] book, "Licensed to Lie." And I think that he’s [Trump] deeply troubled by the entire way that both Comey and Mueller have operated, and the degree to which the attorney general has not exercised any authority over that.”

It’s important to put Gingrich’s remarks in context. He makes it sound like the DOJ’s employees are uniquely anti-Trump. But as The Hill reported last October, employees at virtually every federal agency overwhelmingly gave to Clinton’s campaign: from 84 percent of those making a presidential campaign donation at Defense; to 94 percent at the IRS; to 95 percent and above at Agriculture, Commerce, Education, Energy, Health and Human Services, Homeland Security, Housing and Urban Development, Labor, Justice, State and Treasury. Why the pattern? Because federal employees want a pro-government president, academics told The Hill.

Nonetheless, Gingrich attacked the DOJ as uniquely anti-Trump, accusing Sessions of not “enforcing the law” by reeling in Mueller. When Martin countered that it's not the attorney general’s job to protect the president, Gingrich launched his next distortion.

“What you just said has a misleading implication,” he replied. “It is the attorney general’s job to enforce the law . . . Andy McCarthy, who’s a former Department of Justice prosecutor, who prosecuted the 1992 World Trade Center bombings, has said over and over again that there is no evidence of a crime. So what is Mueller investigating? This is a fishing expedition.”

Gingrich is name-dropping rabid right-wingers as authorities. Powell’s 2014 book is an unabashed attack on the DOJ. McCarthy is an early critic of President Obama who in 2008 wrote for the National Review, “Obama’s personal radicalism, including his collaboration with radical, America-hating Leftists, should have been disqualifying.” But beyond citing blowhards whose views are championed on far-right websites like Breitbart.com, Gingrich is fundamentally twisting what a DOJ investigation does.

“That’s not true,” Gingrich replied. “You have no reason for appointing somebody with the power of the government if you have no evidence of a crime having been committed. It’s very clear in the statute that governs this kind of appointment.”

Wait a minute, Martin said; the DOJ decided an investigation was warranted. That decision included Sessions, even though the attorney general recused himself. Trump keeps saying the whole Russian collusion investigation should not happen in the first place, she said, which is suspect.

“Of course, it’s suspect to you,” Gingrich said. “But isn’t it suspect to you that 97 percent of the donations by people employed at Justice went to Hillary Clinton? And then in terms of Mueller’s law firm, it was 99.82 percent went to Hillary Clinton. And in terms of the people he’s been hiring, they are paid killers. If you read Sidney Powell’s book about the Enron case, you will see these names coming up. These are people who the Supreme Court, on a 9-0 vote, rebuked.”

When Martin pointed out that Sessions is no liberal, Gingrich countered that Sessions is not serving Trump by allowing the special counsel to proceed. He went on to say that Rod Rosenstein, the deputy attorney general, a career department employee, was running the DOJ.

Martin replied that Gingrich was suggesting the department should be run entirely by Republicans. Shouldn't the DOJ be non-partisan and enforce the laws on the books?

“And if you believe that, you live in a fantasy land,” Gingrich interjected. “If you believe the Justice Department does not have a deep cultural bias, and you believe that the average conversation at the Justice Department is not anti-Trump, you’re just living in a fantasy land. That’s the president’s frustration. He doesn’t expect the attorney general to single-handedly change everything. He doesn’t expect the attorney general to in any way impede the law. But let me go back to the original thing. I am personally appalled as a former Speaker of the House that neither the House nor the Senate Judiciary Committee have asked of Rosenstein, the person that is in charge of this investigation . . . what is the crime which Mueller is investigating? Tell us what the code is that has been violated that he’s investigating. Second, why would he hire only anti-Trump lawyers? These are legitimate questions that need to be answered.”

Martin countered that Gingrich cannot prove the DOJ is filled with anti-Trump lawyers.

The rest of the interview went even further into the guilt-by-association weeds, seeking to turn the focus away from Trump’s attacks on Sessions, Comey and Mueller. “If he has nothing to hide, why is he acting like he does?” Martin asked.

Gingrich replied that special counsels are runaway prosecutors who will not quit until they have convicted someone — this time someone in Trump’s orbit.

“Mr. Comey’s last independent counsel, Patrick Fitzgerald, who Comey got appointed after he knew there was no crime, and after they knew who had leaked the CIA agent’s name, and they told the person who leaked to shut up,” he said. “And then they went after Scooter Libby who was Dick Cheney’s chief of staff because they wanted to get Cheney, and they then locked up a New York Times reporter for 85 days to get her to testify. And you looked at that record . . . Mueller is going to get somebody."

The interview ended shortly thereafter, with Gingrich conceding that even Rudy Giuliani said he would have recused himself, had he been appointed attorney general. But that’s a distraction from what’s really going on with Gingrich’s attack on Mueller and the entire Justice Department. Gingrich is trying to be Trump's Goebbels.

As Leonard W. Doob wrote in his essay, “Goebbels’ Principles of Propaganda,” published in Public Opinion and Propaganda, the first two principles were, “Propagandists must have access to intelligence concerning events and public opinion,” and “propaganda must be planned and executed by only one authority.” Clearly, arch Trump defenders like Gingrich cannot abide by having a special counsel investigation proceed where it cannot influence its scope, censor its findings and shape the publicly reported outcome.

While many political observers have said it is only a matter of time before Trump fires Mueller, what’s new and different with Gingrich’s latest line of attack is that he’s not merely angling to be Trump’s top propaganda hitman; he’s willing to smear and discredit the Justice Department to protect Trump’s presidency, as if Trump’s team is above the law and the uppermost federal law enforcement agency's efforts to uphold it.