Reince Priebus says the GOP is the best it's been since 1928. He shouldn't be proud of it

While people were noticing a cringe-worthy historical comparison, Reince Priebus' comments show something else 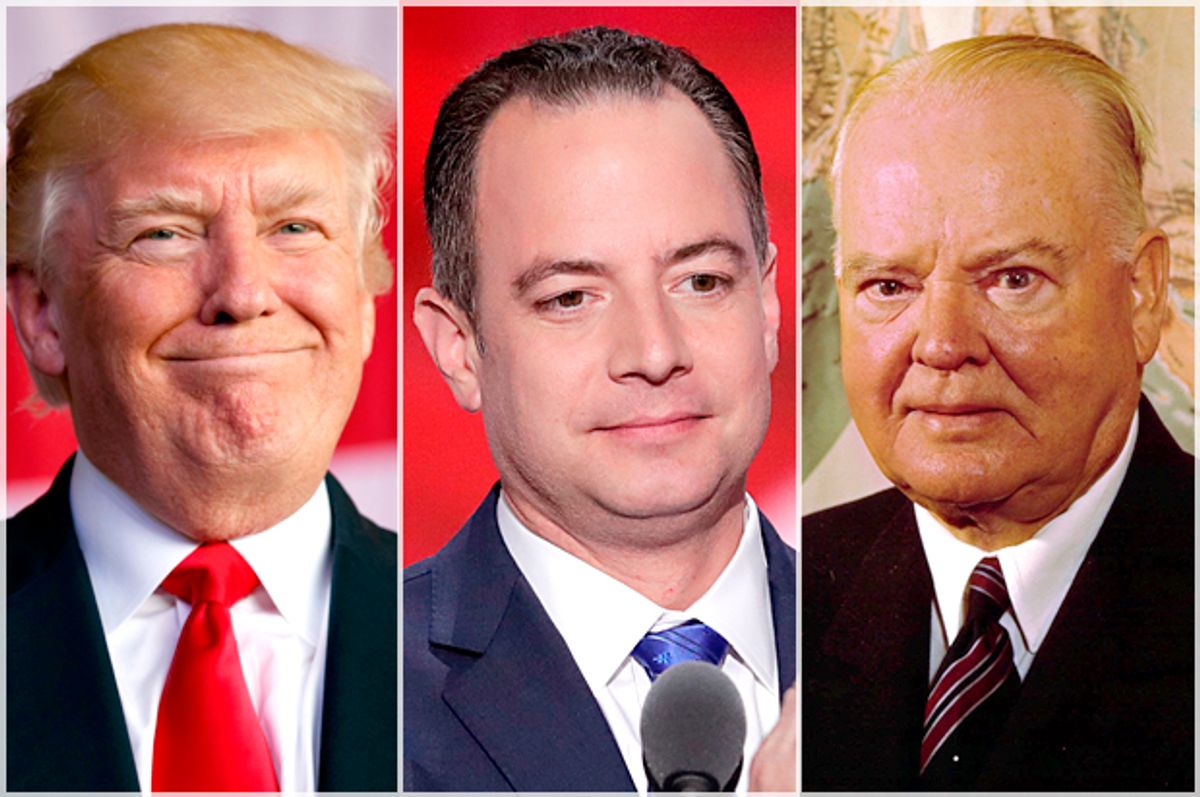 Reince Priebus — the former Republican National Committee chairman who was installed as chief of staff by President Donald Trump before being unceremoniously dumped last week — remains optimistic about the future of the Republican Party.

He probably should have chosen better words to express that optimism, however.

"Winning is what we were supposed to do, and we won. That’s the job of the Republican Party. It’s in the best shape it’s been in since 1928," Priebus told The Atlantic in a recent interview. The former chief of staff was almost certainly referring to that year's legendary presidential election, in which Republican candidate Herbert Hoover defeated Democratic nominee Al Smith in a landslide.

The reasons behind that landslide, however, do not reflect well on the GOP.

As historian Allan Lichtman explained in "Prejudice and the Old Politics: The Presidential Election of 1928," religious and racial bigotries were instrumental in Hoover's victory over Smith. As the first Catholic candidate nominated by a major party, New York Governor Al Smith was at a major disadvantage running against Secretary of Commerce Herbert Hoover. Catholics and Protestants wound up diverging on their choice of candidates in that election far more than in previous or subsequent contests, and given that Protestants had monopolized the White House for the previous 140 years, Hoover naturally had an edge.

More notably, however, is the fact that Hoover personally directed a "Southern strategy" to turn white voters away from Smith, who were reluctant to support him — not only because of his religion but because he was perceived as more progressive on issues of racial equality than most other Democrats. As a result, Hoover managed to win states that had previously been part of the so-called "Solid South" for Democrats, including Texas, Tennessee, North Carolina and Florida.

It isn't even like Republicans can brag about the aftermath of the 1928 election as being a positive one for their party, as they can do for the outcome of the 1980 presidential election. Less than a year after taking office, the Great Depression broke out, ultimately damning Hoover to the fate of a one-term president and keeping the GOP out of the White House for 20 straight years.

In short: If Priebus winds up being correct in his comparison between the 2016 election and the 1928 election, that won't be a good thing for his party.

Meanwhile, the White House is continued to adjust to the stewardship of Trump's new chief of staff, General John Kelly, according to Axios:

We've got a culture problem right now," a White House official tells me. "Now you have Kelly come into this. Is it a new power center or someone without a dog in the fight? Is that level of respect that he comes in with, what it takes to have some kind of calming presence in the West Wing? Reince didn't have the credibility to broker peace between anybody."

If Priebus is correct that the Republicans are in a 1928 situation, then Kelly most definitely has his work cut out for him.