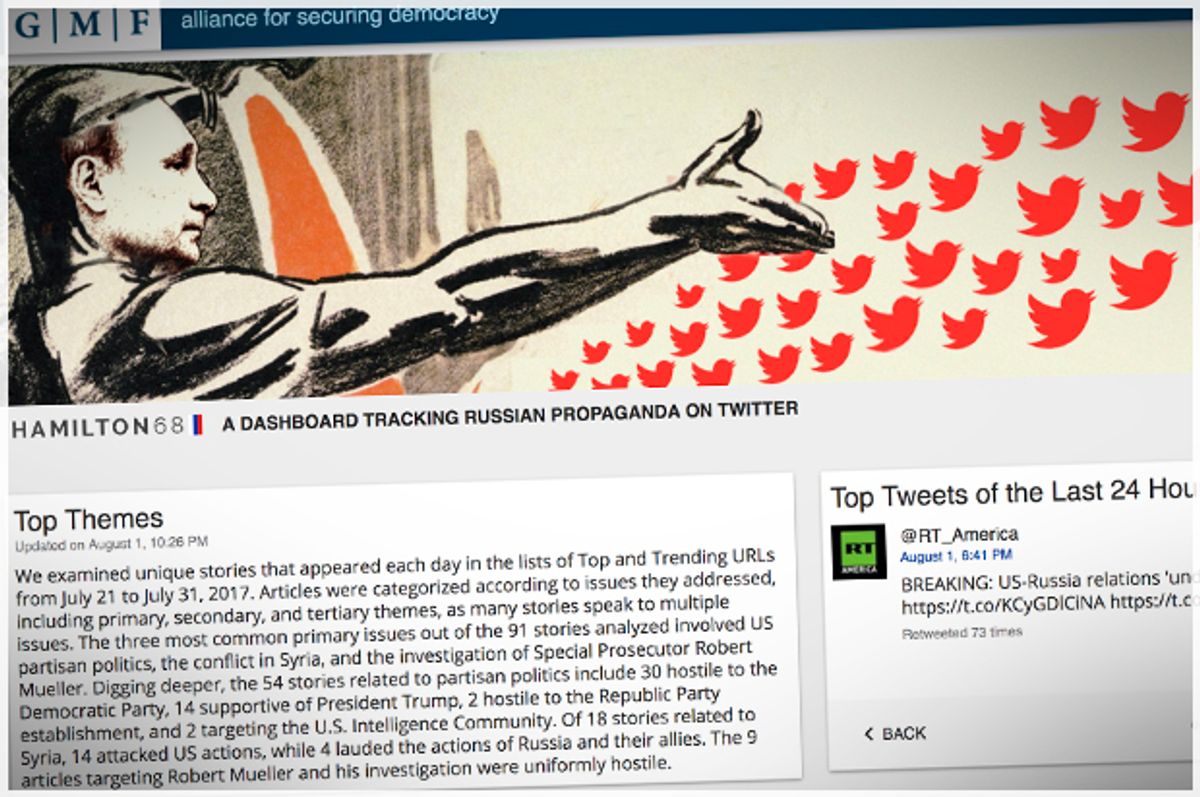 If you're tired of hearing about Russian bots, spam artists and fake news purveyors being able to spread their propaganda all over cyberspace, then there is good news.

Thanks to Dashboard, created by a group of American foreign policy and computer technology experts, ordinary citizens now have the tools necessary to identify and avoid the malarkey.

A new website has been created by the Alliance for Securing Democracy that tracks the propaganda being produced on Twitter by Russian accounts.

The organization, which describes itself as a "bipartisan, transatlantic initiative" that aims to "publicly document and expose Vladimir Putin’s ongoing efforts to subvert democracy in the United States and Europe," is led by director Laura Rosenberger, who is also a senior fellow at The German Marshall Fund of the United States (which houses the organization).

Rosenberger helped us better understand the objectives of the new propaganda tracker.

"The Alliance for Securing Democracy is looking comprehensively at the tools that Russia uses to undermine democracies and democratic institutions across Europe and in the United States," Rosenberger explained. "And we are both looking individually at all of the different tools trying to understand them better, how they operate and develop ways to defend against and deter them, and then looking at the entire toolkit, how these different tools interact with one another as part of the Kremlin's strategy."

As Rosenberger pointed out, misinformation is one of the main tools being used by Russia today to advance its geopolitical interests.

"What we find is that a lot of what the Russians — I shouldn't even just call them the Russians — a lot of what these information networks are pushing isn't always even just about Russia, and a lot of it's actually not about any political context or frankly even election context," Rosenberger told Salon. "It's a lot of things that are aimed at sowing and exploiting divisions in society."

Nor is this approach only being employed against the United States, Rosenberger observed, pointing to Russian efforts across Europe that included the recent presidential election in France.

"Russia's a declining power. And really what Vladimir Putin cares about most is strength, his own personal strength," Rosenberger pointed out. "And the only way for him to maintain that strength is to, in his mind, restore Russia in a sort of nostalgic way to its global power. And as a declining power, the only way that Russia can actually gain power is in relative terms, right?"

She added, "So contrast for a second with China, which is a rising power. They are gaining power in absolute terms. They have different long-term interests. Russia, as a declining power, can only actually gain power in the relative sense by weakening others."

On Twitter and other social media, it's hard to know if the news stories they're reading are legitimate, but there are ways that people can make sure that the news that consume is legitimate.

"I think it's really important for people who are reading information in general to think critically, to be discerning, to look into the sourcing of different facts, and make sure that they are in fact understanding the sourcing of that information and where it comes from in order to then evaluate it," Rosenberger said. "And people should evaluate it on their own."

But the dashboard is a good first step.