Thank your lucky stars you don't have Eddie Coyle's friends

An appreciation of Robert Mitchum in "The Friends of Eddie Coyle," the ultimate Boston movie, on his 100th birthday 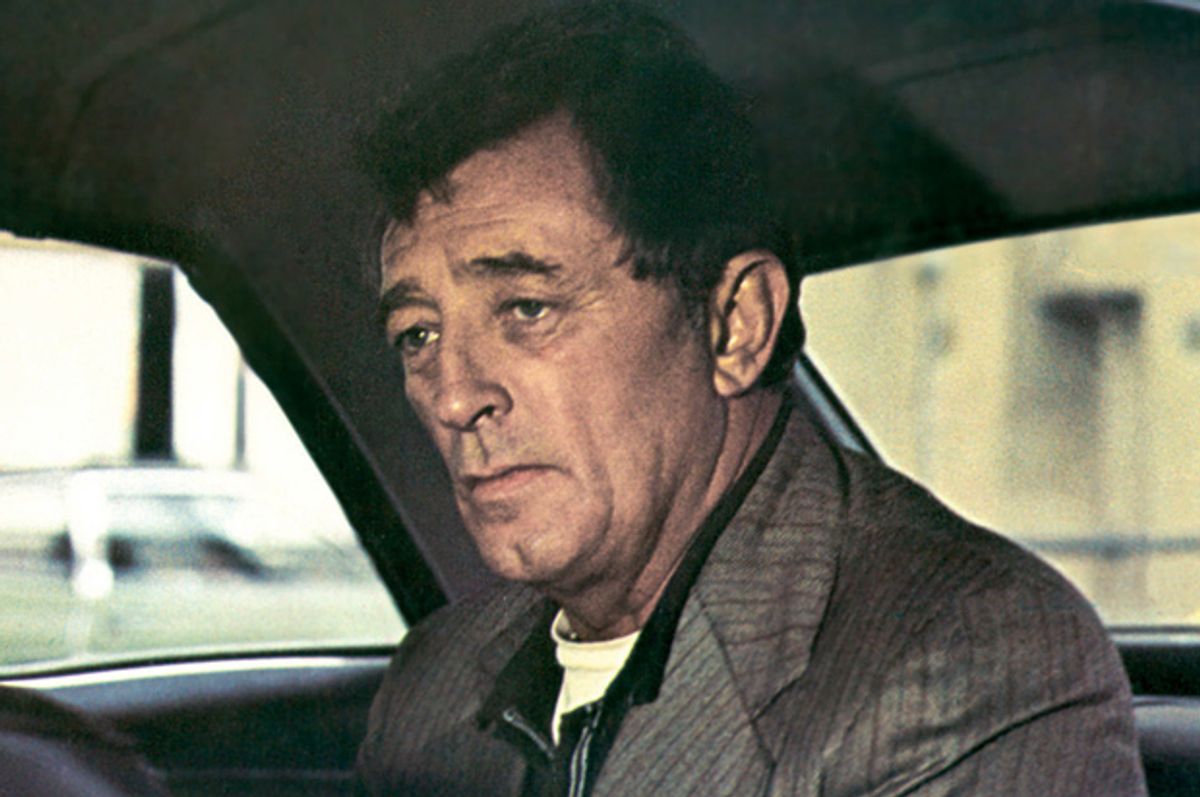 Robert Mitchum in "The Friends of Eddie Coyle" (Paramount Pictures)
--

There are a lot of things I do a lot of, but heading up that list are two things I would imagine I do more than anyone: Every year I walk 3,000 miles inside of the city of Boston, and I also watch great gobs of Robert Mitchum films.

The actor is marking his centennial this Sunday, and it’s always confounded me that he never tends to get discussed with the likes of Jimmy Stewart, James Cagney (Orson Welles’ personal favorite) and Cary Grant as the best of Hollywood’s golden age.

When he is discussed it is in terms of his brawn, his tough guy persona, his status as a veritable noir god, or his wisecracking offscreen attitudes, which may or may not include reference to his pot bust in the late 1940s, when such matters were considered huge crises of social justice.

Equally baffling is how so many filmmakers manage to get Boston wrong. How so many actors get Boston accents wrong, with basically no films at all capturing the sounds and the prevailing senses of this city that I absorb as I crisscross it hither and yon week in, week out. And this includes actors from Boston. Come here, stay as long as you like, and you will never hear anyone talk like that cop Matt Damon plays in “The Departed.”

Mitchum rose to prominence in the film noir genre of the postwar years, his apex in that field of darkness being 1947’s “Out of the Past,” directed by Jacques Tourneur, with Jane Greer playing a far worse version of that ex of yours that you’ve told your buddies for years was the worst thing that ever happened to you.

Mitchum is virtuosic in the picture, but a lot of that has to do with his voice, which carries the bulk of the plot through flashback narration that at times reminds me of those old recordings of F. Scott Fitzgerald reading Keats, but these are odes of rain-slicked streets, dreams that have had their brains dashed out, the past getting pugnacious with the present and railroading the yet-to-be-born future.

Mitchum was crazily versatile, with turns in Charles Laughton’s beyond-creepy “Night of the Hunter” (1955), Howard Hawks’ late career “Western El Dorado” (1967) and William Wellman’s matchless war flick, “The Story of G.I. Joe” (1945). But for all of the noir glories — hell, 1952’s “The Lusty Men” is not only rodeo-noir, but it might be the best picture of Nicholas Ray’s career — there is nothing in the Mitchum canon like 1973’s “The Friends of Eddie Coyle.”

It is based on George V. Higgins’ book of the same name, which largely dispenses with traditional novelistic exposition. That is, there’s essentially no first- or third-person narrator setting scenes for us, as almost all of the book — or the parts that really matter, anyway — originate from dialogue. And good Lordy, is that dialogue a’cracklin’.

Higgins worked on the script for the film, too, which involves Mitchum playing the titular character. He’s a low-level, middle-aged Boston crook who simply wants to avoid doing another stint of time in New Hampshire. To achieve this end, he has to work for the cops to ply them with information on his fellows.

The “friends” of the title is deliberately ironic — this dude doesn’t really have friends, as he inhabits a world where connection matters less, and hunting people down matters more. It’s like fighting for survival in an online comments section where everyone tries to hide behind anonymity in a society that is increasingly fragmented and de-emotionalized, only we’re talking Boston city streets rather than computer screens.

The dialogue was so realistic that Mitchum was convinced that Higgins — a former U.S. lawyer — was using actual wiretap records he had. To get himself ready for the role, Mitchum got a cheap down-and-out middle-aged guy haircut, and started hanging out with some seriously shady guys on the Boston docks.

On my walks I like to visit some of the locations where “Eddie Coyle” was shot. There are the obvious ones — the Government Center plaza, Boston Common, the banks of the Charles, MIT. It’s uncanny to me the pace at which the film plays out, which seems to mirror much of what you naturally observe in the city. Boston is a pacey city, but it’s not NYC pacey, and while people rush about their business as you observe them outside, you also encounter a lot of conversations that play out with a kind of wistfulness amid the hubbub, even if they’re about if the Sox suck this year, or whether the Tall Ships are overhyped.

Director Peter Yates nails that feeling early on in the film, when Mitchum’s Eddie Coyle is at this depressing cafeteria-style restaurant for a meeting with Steven Keats’ Jackie Brown, a gun-runner Coyle is hooking up, so he can rat him out later. There is working both sides of the street, and then there is setting up food trucks on each side of them, and just kind of hoping both don’t cancel each other out. You know how it is when you’re desperate; there’s not a lot you won’t try, which makes all of us, in our way, noir denizens.

But this is a little different, because we’re in a post-noir world within “The Friends of Eddie Coyle,” and post-noir might be darker than standard noir, because there’s not an iota of Hollywood razzle-dazzle. Yates executes this scene largely in a two-shot, with Mitchum doing a lot of the talking, giving the upstart the lowdown on how he came by his nickname of Fingers. This is what an actual Boston accent sounds like. Mitchum was from Connecticut, so maybe some of it drifted down there, but his soft R’s have a quasi-English feel about them, like this is a speaker who is descended from people who once broke from a king, their souls perhaps more hardscrabble than nobly born, which set them up as noir folk early on.

The scene is in no hurry to advance, for it has much to convey to you, first, about these two men, and it pulls you from the back of your chair, just as the jaded Jackie Brown character is leaning in himself.

Mitchum appears in only about a quarter of the film, but it is the rare actor whose presence hovers over each scene in which he is not present. I think of it almost like the truly great athletes who always make their teammates better. Peter Boyle is excellent — and cast against type — as Dillon, a sort of Sam Malone-esque bartender figure who doubles as both your shoulder to cry on on as you wet your drink with tears, and the man who can, for a price, blow your head off. (Dillon’s bar was at the location of Tower Records at the Mass. Ave. end of Newbury Street, for you location trainspotters.)

I guess I probably shouldn’t say what happens to Eddie Coyle, if he skates over the ice or sinks under it, because this is a film that still has something of cult status about it, and I’m never surprised when people remark that they haven’t seen it yet. Just as I’m never surprised, having seen it so many dozens of times myself, how those who have watched it become impassioned fans. Eddie might not be loyal to his mates, but you tend to end up being loyal for all time to his picture, once you’ve seen how it all goes down.

But I will mention a scene near the end, where Dillon tries to take Coyle’s mind off of his troubles, by bringing him to a Bruins game at the old Boston Garden, that barn of a rink where the Balcony Gods bellowed out their lungs. Coyle is utterly transfixed by the play of Bobby Orr, who was basically Tom Brady in these parts before Tom Brady was born. Except, he was perhaps even bigger.

At one point, like a groundling at a Shakespeare play, circa 1599, Mitchum strains forward and shouts his encomia for this player, but he might as well have been shouting for the film itself, his own performance, his own career, this careful distillation of a city, and of a genre that had birthed a successor to itself in a single film that I’ll call the best of the 1970s. Sit the F down, “Godfather.”

Asked what had enabled him to be so successful in the role of the hunting and hunted Eddie Coyle, Mitchum cited a single confederate: that cheap middle-aged man’s haircut. But there ain’t nothing cheap about going as deep as this into a picture. And sometimes, never coming back out can be a good thing.