Three months after his huge win, the French neoliberal darling has seen his popularity crumble. It's no surprise 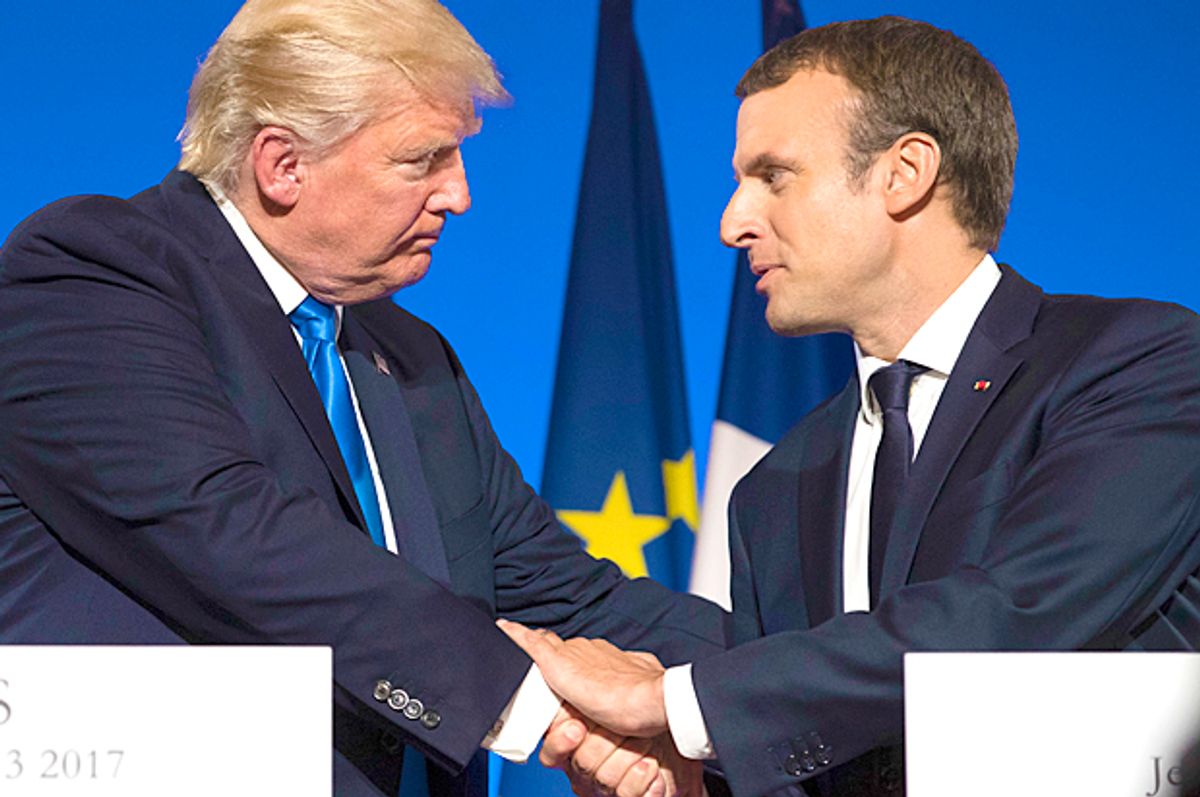 A few months ago Emmanuel Macron was on top of the world. After being elected the youngest president in French history, Macron's approval rating was above 60 percent and his independent movement, La République en Marche — which branded itself  as“neither right nor left” — won a large majority in the French parliament, giving the 39-year-old free rein to implement his “radical centrist” agenda.

Not surprisingly, Macron’s defeat of the far-right demagogue Marine Le Pen led to a collective sigh of relief in neoliberal circles, and the former investment banker was hailed by center-left commentators as the savior of the European project. Macron’s meteoric rise was also touted as proof that centrism is the best way to fight right-wing populism in Europe and the United States.

These reactions were to be expected — and, of course, Le Pen’s conclusive defeat was certainly worth celebrating. But Macron’s victory was never the triumph for centrism that many liberals reflexively took it to be. Indeed, the optimism exuded by many people on the center-left was borderline delusional, and that delusion has become all the more apparent as Macron’s popularity has plunged over the summer.

According to the most recent YouGov poll, Macron’s approval rating has plummeted in just two months and is now about the same as Donald Trump’s, at 36 percent. (Trump’s approval rating started out much lower and has declined far more slowly.) This is the steepest decline for any French president in more than 20 years; by comparison, it took six months for his predecessor, François Hollande -- whose approval rating fell all the way to 4 percent by the end of his term — to slip this low.

Though many of the center-left liberals who looked to Macron as liberalism’s white knight may be stunned by this sharp decline, it was about as surprising as Macron’s assault on labor unions (which is to say, not surprising at all). This is because Macron was never really that popular to begin with — or, to be more accurate, he was never a known quantity. As a candidate, this worked to his advantage, as he was widely seen — and portrayed by the media — as an outsider and was deliberately vague about the policies he would implement as president.

But this outsider status was an illusion, and Macron is a product of the very “establishment” that he railed against. The young president spent his early career making a fortune as an investment banker at the Rothschild firm before eventually becoming the economy minister for Hollande’s government from 2014 to 2016. In that position he pushed for the very same pro-business reforms that contributed to Hollande’s single-digit approval rating.

Even the success of Macron’s En Marche movement in the parliamentary elections was not truly indicative of any broad level of support. Voter turnout in that election was the lowest in modern French history, indicating widespread apathy and cynicism more than anything else.

Macron’s brand of "extreme centrism," then, is hardly the massive popular hit that many mainstream commentators perceived it to be. Over the past few months, as the French people have become more acquainted with their new president’s authoritarian personality and neoliberal policy proposals, their opinion of him has declined rapidly.

This was anticipated by many progressives before the election. As I argued in May, Macron represented a thinly disguised continuation of the status quo, and this was likely to exacerbate public discontent and play into the hands of the far right. Owen Jones made the same point when he observed in the Guardian that Marine Le Pen might have her eyes on “the real prize: the 2022 presidential race.”

Of course Macron’s presidency is still young, and there's more than enough time for the 39-year-old to turn things around. That seems unlikely simply because he embodies the neoliberal ideology that has engendered the rise of far right populism throughout the West. In that sense, he is Le Pen’s greatest ally.

This should serve a cautionary tale for the Democratic Party. Many American liberals will no doubt continue to maintain that Macron’s brand of technocratic centrism, “neither right nor left,” is the prescription for defeating President Trump. But there's absolutely no evidence to support that, and Hillary Clinton’s failure to stop Trump in November should have put an end to this kind of thinking.

According to a Bloomberg survey from last month, the former Democratic nominee's approval rating is currently about the same as President Trump’s (at 39 percent), which suggests that her presidency would have been almost as unpopular. By comparison, Sen. Bernie Sanders, still the de facto leader of the progressive wing of the Democratic Party, remains the most popular politician in America, with an approval rating that hovers around 75 percent. One can also look across the Atlantic to the United Kingdom, where the Labour Party has soared in the polls under the leadership of left-wing populist Jeremy Corbyn. Since last June’s snap election, which saw the highest voter turnout in 25 years (especially among young voters, who voted overwhelmingly for Labour), Corbyn’s approval rating has overtaken Prime Minister Theresa May’s.

All of this should leave little doubt that the real popular energy is on the left and that progressive populism is the way to defeat right-wing populism, whether in France, Britain or the United States. Unfortunately, the French people are stuck with Macron for the next five years, which will likely strengthen Le Pen and the National Front. In America, the Democrats should take heed of what is happening in Europe and fight Trump with a forceful, progressive populism of their own.