"Tim & Eric" in the age of Trump: Trashing neoliberalism never felt so good

Ten years since its debut, the alt-comedy duo returns to show us what Tim & Eric looks like under the Trump regime 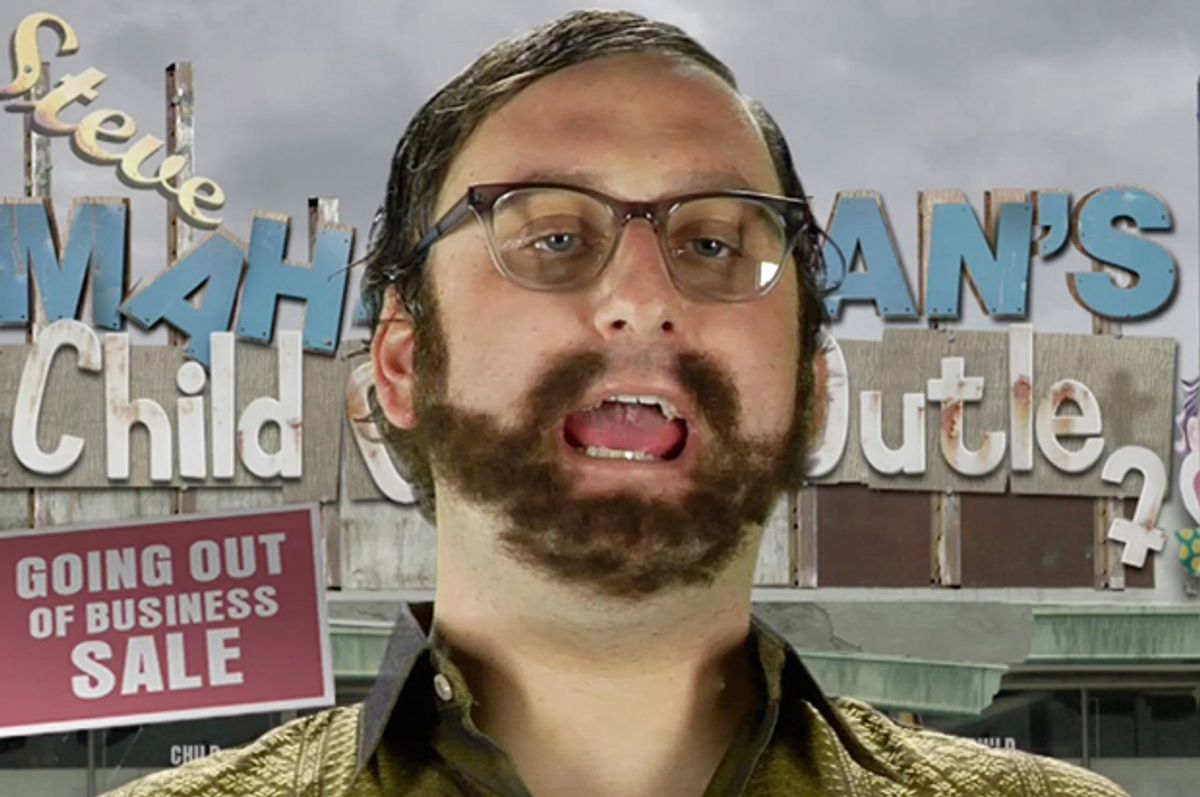 Part of the fun of “rebooting” movies and TV shows for a new generation is the chance to see what a beloved series might look like under different cultural and political conditions. “Star Trek” is a prime example of this: the show has always had an optimistic, progressive bent to it, particularly in its depiction of a post-scarcity future. And yet, what people think a “progressive” future would look like has changed radically since the original series, filmed at the peak of the Cold War. You might say the same of “The X-Files,” “Star Wars,” “Twin Peaks” or even a show like “The Daily Show,” which has a completely different resonance under Trump than it did under Clinton, Bush or Obama.

When Tim Heidecker and Eric Wareheim, the duo behind the “alt-comedy” show “Tim & Eric Awesome Show, Great Job!,” announced that they were doing a “10th anniversary” tour, I was intrigued as to how the show might feel different in the Trump era. The absurdist sketch show ran on Adult Swim for five seasons, from 2007 to 2010, and was a unique blend of anti-humor, absurdism, parodies of local access television and riffs on business culture. The content veered from faux-infomercials to profiles of cringe-inducing sketch characters to fart jokes. In a New York Times interview, the duo called the show “the nightmare version of television.” Which was apt, I think.

The show was never explicitly capital-P political — meaning, there were few allusions to Bush or Obama, the eras during which it was produced, or current events. Yet the co-stars themselves are self-professed, outspoken progressives. Tim Heidecker, who has since started his own show, “Decker” — a stilted parody of special agent serial dramas like “24” — was a prominent Obama supporter in 2008 and now is a regular on the podcast “Chapo Trap House,” a socialist talk show akin to Howard Stern for the political left.

Heidecker’s political affinities are unsurprising in light of the more subtle political themes that run through “Tim and Eric Awesome Show.” The show’s sketches often feel like avant-garde satires of low-budget infomercials (and I mean LOW budget). One of my favorite “Tim and Eric” sketches is a faux-advertisement for a fictitious kid’s toy, the “I-Jammer.” The sketch is a pitch-perfect simulacrum of a children’s toy ad: rambunctious sound effects and quick cuts, with a narrator who affects a faint AAVE accent — a subtle jab at commercial exploitation of black culture. The running joke is that the toy’s purpose and function is completely obscure: the narrator asserts that it has two “dance tones,” and that you can “e-bump” and “jizzle jam,” but what the toy is is never explained; the cubical toy’s properties grow increasingly absurd, and at one point, it is revealed to have a faucet that shoots out an oatmeal-like substance that the excitable child actors smear on their faces and possibly become physiologically dependent on.

The brilliance of the “I-Jammer” sketch lies in how Tim and Eric take the signs and signifiers of late-capitalist consumption and stretch them until they are unidentifiable. It’s an outrageous satire of consumerist excess. Their show is the best satire of free market fundamentalist culture — or neoliberalism, if you will — on television in this decade. And throughout all five seasons, consumer culture remains one of the duo’s favorite targets.

Masculinity was the other. Tim and Eric have always had a penchant for hiring outsiders rather than “real” actors — amateur actors and everyday people were a staple of the show’s look. Often it looks like the actors have no idea what they’re doing; it’s unclear if this is by design or not. No one on their show looks like a celebrity, or someone who had a professional do their makeup — least of all the two co-stars. Strange faces are accentuated, non-normative bodies and looks. The two have an obsession with “dads”; many sketches revolve around fatherhood or feature stereotypically “masculine” settings — a bar, or a sports venue, for instance. But by the end of the sketch, the symbols of masculine identity are always subverted, revealed as ridiculous and pathetic. Even though the cast is largely male, its persistent skewering of the masculine might qualify it as feminist.

Last Wednesday, I headed down to San Francisco’s Warfield Theater to see the Tim and Eric 10th Anniversary live show. Ten years after the television show’s debut, Tim and Eric were hitting the road for a live show that blended projection, a live DJ, props and audience participation. How would Tim and Eric look under Trump? Surprisingly, and also unsurprisingly, the answer was: not that different.

In a typical sketch that arrived in the middle of the live show, Tim and Eric invited audience members on the stage to teach them the secrets of their new business school, and possibly grant them a diploma if they get the questions right — turning them into “business boys,” in their parlance. Yet in typical Tim and Eric style, the purpose and function of the business school is obscure, as is what the school teaches. The multiple choice questions given to the audience members were meaningless jargon.

In the Business Boys sketch, Heidecker played a comically sexist instructor who insisted the female contestant on stage couldn’t be a “business boy” by virtue of her gender. When she won the business boy contest and was awarded the diploma, Tim’s character was incensed. Just like real business school, Tim & Eric’s was characterized by casual sexism and obscure jargon just the same.

The main targets of Tim and Eric’s barbs — masculinity and consumerism — haven’t changed much in the past decade. Indeed, if anything, America’s problem with toxic masculinity has become even more pervasive under Trump and could use a good Tim & Eric — style deflating. As the duo prepares to release a season 6 “special,” it couldn’t come at a better moment.