Satire’s war on stupid: This prank on the Democrats and an ACLU brief reveal our nation’s biggest battle

Satire is often criticized as partisan, but its real target is stupidity across the political spectrum 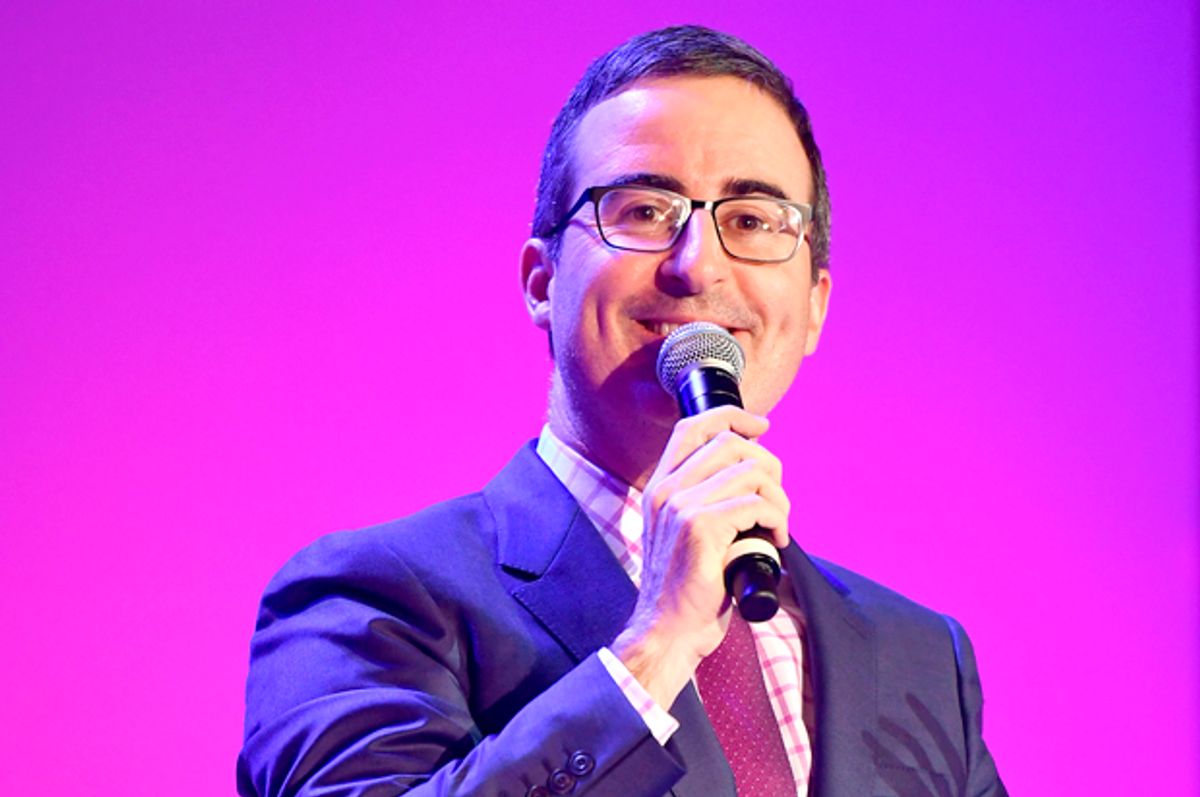 Satire is cool and it’s smart. From Trevor Noah to John Oliver to Seth Meyers to Stephen Colbert to SNL’s Weekend Update, political satire in the United States is having a moment. Edgy satirists like Lee Camp and Jimmy Dore are informing viewers and covering stories ignored by the mainstream news. Political movements like Indivisible are encouraging members to use satirical pranks as a form of laughtivism.

Our nation has a long tradition of satire, but there is no doubt that satire is currently playing a bigger role in shaping public dialogue and debate than ever before. Facebook feeds and tweets are rife with satirical clips and memes that come to us from both professional satirists and what I call “citizen satirists.” These fun moments are more than silly snark; they actually tend to have an impact on how voters shape their views of issues. They also help build community among those who are the “it getters.” It is not an exaggeration to say that satire is the political idiom of many voters in the U.S., especially young ones. But perhaps even more importantly, satire fires up the mind and makes us smarter.

There are lots of reasons why satire is on the rise — a sensationalist news media, the significance of internet culture, and a president who is a joke — but the key motor driving the rise of satire in our nation is the cult of stupidity. Recent data shows that only a third of the nation strongly disbelieves in telepathy and ghosts. Even better, two-thirds of Americans believe that “angels and demons are active in the world.” Almost a quarter of our nation believes that vaccines cause autism, and that Donald Trump won the popular vote. That same percentage of the population believes that Barack Obama maybe or definitely is the Antichrist.

The increase in satire is directly connected to this increase in gullibility. Satire depends on a smart use of irony, on saying one thing and meaning another, on pointing out flaws in logic, and on exposing folly, farce and bluster. When people in power promote stupid ideas like “alternative facts” and willing audiences swallow their lines, satire leaps to the rescue.

Most folks don’t get that point. Thus we have seen a common argument against satire that it is partisan and dividing our nation. In fact, Caitlin Flanagan went so far as to blame satire for the rise of Trump in a piece for the Atlantic. In “How Late-Night Comedy Fueled the Rise of Trump,” Flanagan argues that “Sneering hosts have alienated conservatives and made liberals smug.”

In a time when everything has become partisan, even facts and science, it is convenient to lump satire in with more of our red versus blue state drama. And while it is certainly true that we can count more left-leaning satirists than right-leaning ones, that split is directly tied to the partisan divide over reality.

As Kurt Andersen writes in a piece on America’s post-truth moment, the entire nation is slipping into fantasy, but the right is clearly more unhinged than the left. Recall that Colbert pointed out on “The Colbert Report” that “reality has a well-known liberal bias.”

And who can forget that before Kellyanne Conway’s reference to “alternative facts” we had Karl Rove talking about the end of “the reality-based community”?

“People,” Rove explained, “believe that solutions emerge from your judicious study of discernible reality. . . .That’s not the way the world really works anymore.” That sort of lunacy has been a signature move on the right for years now.

Targeting that sort of insanity and the corporate news media that lapped it up is what fueled the rise of satire news shows like those of Jon Stewart and Colbert in the post-9/11 era. In those days, Stewart and Colbert were not only more trusted than journalists, their viewers were consistently more informed than those of other news shows.

The fact that the right was often the butt of the joke is the core of Flanagan’s argument that liberal satirists alienated Trump supporters and helped get him in office. But Flanagan misses the larger point: that the real war is over reality versus fantasy — or, to put it bluntly, smart versus stupid. Satire targets simplemindedness. It goes after lunacy. And it really loves to target hypocrisy.

Only if you understand that key feature of satire can you make sense of two recent satire highlights that prove that satire is an equal opportunity offender whose main target is our dumb nation.

The first is a brilliant prank launched by the Yes Men. The Yes Men, Andy Bichlbaum and Mike Bonanno, have a long history of staging pranks, mainly by impersonating people to infiltrate conferences, produce fake newspapers, hold press conferences and engage in other types of public stunts in order to expose “the wrongdoings of miscellaneous, mostly corporate evildoers.”

While many of their targets have hailed from the right, their latest stunt targeted the Democratic Party. One week after Democrats in Congress announced “A Better Deal: Better Jobs, Better Wages, Better Future” — a so-called "populist" economic agenda that was immediately criticized as grossly insufficient — Bichlbaum decided to pose as a "DNC representative" and hold a live-tweeted press conference in Pasadena before an audience of 100.

In order to shame the DNC for their tone-deaf inability to listen to the will of the people, Bichlbaum decided to just pretend that the DNC has, in fact, adopted a truly “better deal.” In his press conference he clarified some of the plan's "lesser-known populist features": Medicare for all (desired by a strong majority of voters overall, according to a number of polls, and even by 41 percent of Republicans), free college tuition (desired by 62 percent of all voters), stronger unions (by an ever-growing majority), and public campaign financing and the elimination of corporate lobbying (large majorities of Americans feel corporations, the wealthy and lobbyists have far too much influence in politics).

It was a brilliant attack on the bumbling DNC leadership, who somehow imagine that they can ignore what voters want, come up with a tired slogan, and still win elections. By creating the illusion that election-winning populist issues are part of the DNC's "Better Deal,” the Yes Men were able to expertly expose how delusional and disconnected from the public the DNC leadership has become.

My second example isn’t about satire attacking the left; instead it is about the increasing presence of satire in places that would have previously been unthinkable. Because stupidity is spreading like an epidemic, satire is cropping up in unlikely places.

Only that can explain how satire, snark and sass entered into an amicus brief field by the West Virginia ACLU last week in Murray Energy’s libel and defamation suit against HBO satire host John Oliver. The lawsuit stems from a brilliant attack Oliver launched on the coal industry, especially Murray energy CEO Bob Murray. If you haven’t seen that clip, it’s one of Oliver’s best.

But what’s interesting isn’t the fact that a satirist is being sued by Murray for making fun of him; it’s that the amicus brief itself is a brilliant piece of satirical humor. And while it clearly places Murray as the butt of the joke, its real target is the sheer insanity of the case itself.

But in the end, it is the absurdity of the Murray lawsuit that the brief targets with this jab:

It is a basic concept of free speech that you do not get to sue media organizations because you don’t like their coverage. However, this is apparently a difficult concept for Plaintiffs to grasp.

Plaintiff’s Requested Injunction is Clearly Unconstitutional. You Can’t Get a Court Order Telling the Press How to Cover Stories, Bob.

As the brief makes the case that the suit is meritless, it offers this header:

Sure, the target here is Murray and his frivolous lawsuit. But the snarky satire in the brief uses irony and humor to make a larger point: that “Bob Murray needs to be taught that our judicial system is simply not the place for harassment and petty grievances.” In other words, the wealthy should not be able to sue people and media outlets that make them look bad.

Flanagan’s article suggested that Trump supporters were angry at satirical attacks on their beliefs — much like the way that Murray was angry with Oliver for mocking him. But her argument has inverted cause and effect.

Instead it is the satirist who is exhausted by the daily onslaught of stupidity on offer throughout our nation. Satire doesn’t breed delusional voters; it responds to their existence.

Our problem isn’t that we are divided and it isn’t that Trump supporters like Murray are miffed when ridiculed. Satire isn't simply mockery. It isn't about cutting down — although it can feel that way if it pokes fun at your stupid beliefs.