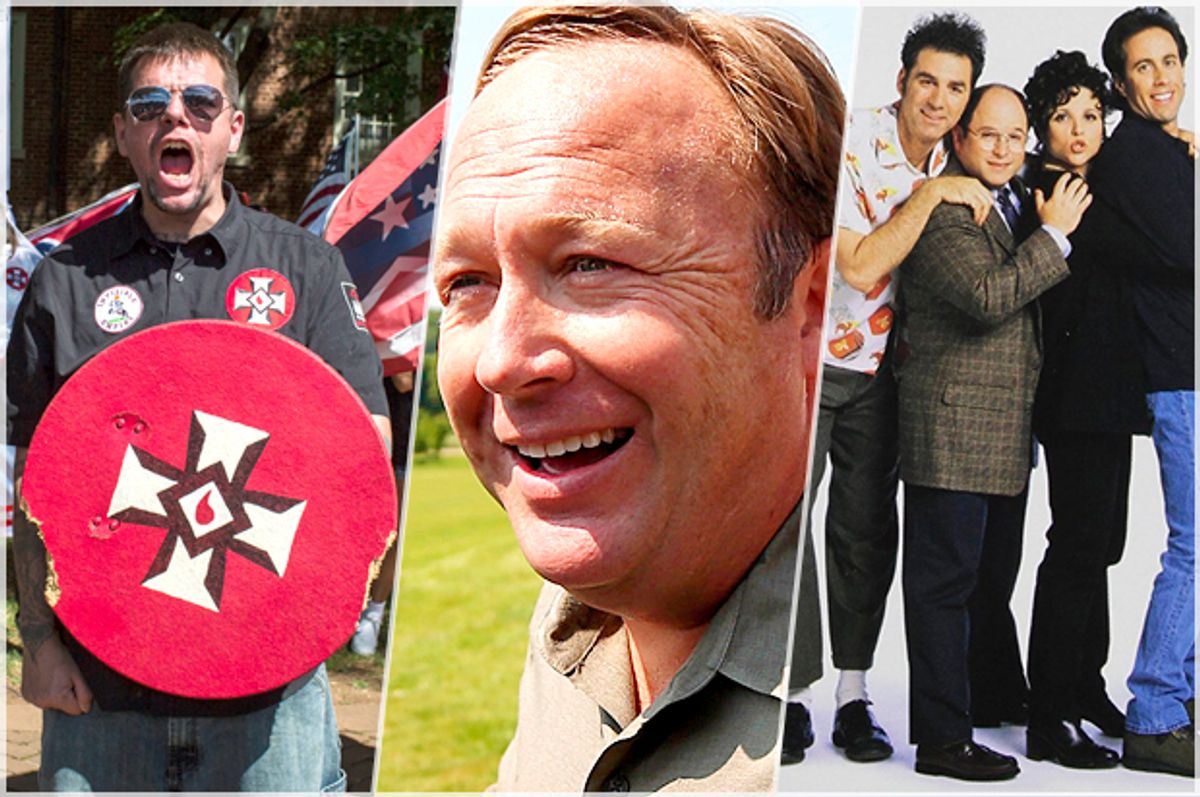 Alex Jones thinks the "Unite the Right" riots in Charlottesville — which left one woman dead and several injured — weren't necessarily the work of white supremacists; Jones believes they were "just Jewish actors."

Sunday's installment of Jones' customary tirades addresses his latest theory that the events that transpired in Charlottesville were "false flags," a term he popularized to suggest the government is staging terror attacks, such as the 9/11 terror attacks and the Sandy Hook Elementary School Massacre. Jones said many of the KKK protesters were "Jewish actors," arguing they look like the "cast of Seinfeld" without their hoods. Via Media Matters:

Nothing against Jews in general, but they are leftists Jews that want to create this clash and they go dress up as Nazis. I have footage in Austin — we're going to find it somewhere here at the office — where it literally looks like cast of "Seinfeld" or like Howard Stern in a Nazi outfit. They all look like Howard Stern. They almost got like little curly hair down, and they’re just up there heiling Hitler. You can tell they are totally uncomfortable, they are totally scared, and it’s all just meant to create the clash.

On Saturday, Jones released an hour-long video to follow up his theory of the events. He continued an unsurprising account of the riots which included his usual diatribe against the "evil" that pervades the world, including liberal philanthropist George Soros, Black Lives Matter, globalists, elitists, anarchists, Democrats and Republicans, just to name a few. Jones attributed the terrifying events that plagued Charlottesville to a government attempt to silence conservative protesters.

On Twitter, he suggested the government was lying about the events, comparing it to the 2016 election where, according to Jones, Democrats wanted to "install Hillary Clinton as our first dictator."

Video: What they are not telling you about the race riots of Charlottesville!https://t.co/zJ1uf6lb5e pic.twitter.com/Qhy9jaxSh9