Donald Trump hasn't just tolerated this upsurge of fascist violence — he enabled and encouraged it. Now he must go 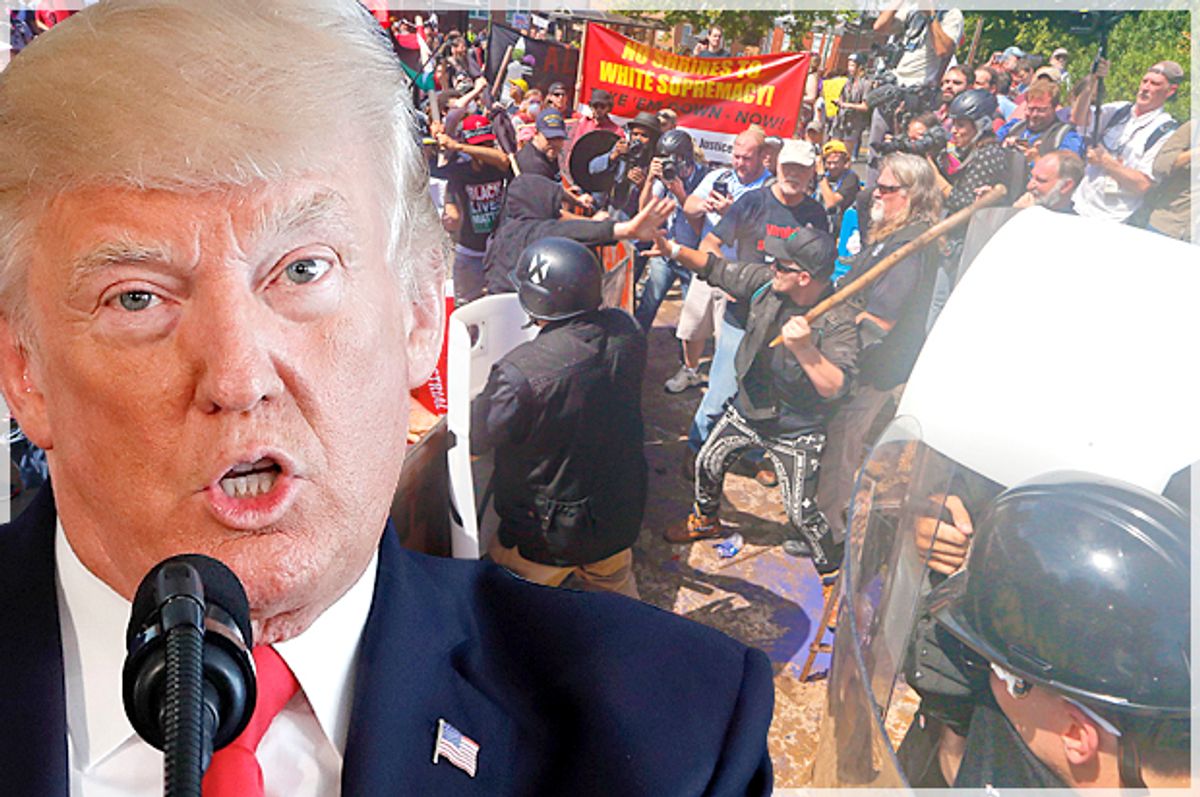 Now is an era of sadness and despair in America. Not only have right-wing extremists and Nazis, mostly composed of deeply entitled and privileged young white men, marched openly in our streets, pushing well beyond free speech by committing acts of deadly violence and terror against counter-protesters, but it’s become abundantly clear that our chief executive -- the president of the United States -- is both an enabler and a sympathizer of their lost cause.

There have been many occasions throughout the past two years when Donald Trump has made me embarrassed to call myself an American. There is his disgraceful and unpresidential behavior, often made obvious multiple times daily. There is the disturbing reality that he’s been politically successful both despite and because of his erratic bullying, which is not reflective of a strong leader but rather a fledgling authoritarian, ignorant bigot and amoral toddler.

On Saturday, however, Trump revealed himself to be far worse, given his barely unspoken, between-the-lines support for white supremacist goon squads and, yes, Nazi terrorists inside our national borders, marching in our streets.

It was bad enough that Trump has surrounded himself with “alt-right” white supremacists like Sebastian Gorka, Steve Bannon and Stephen Miller. It was bad enough that Trump constructed his entire political message around a racist dog-whistle, appealing explicitly to the “forgotten men and women” of America. (There was little mystery about what color they were.) It was bad enough that throughout his campaign and presidency so far, Trump has pandered to aggrieved white people angry about Black Lives Matter and the first black president, while he simultaneously demonized nonwhites, be they immigrants or citizens. And then, in Bedminster, New Jersey, on Saturday, he vindicated all our suspicions with the most atrocious presidential remarks delivered in generations.

While victims of the graphic, horrifying terror attack in Charlottesville were still covered in freshly drawn blood, including and especially the late Heather Heyer, the president meekly denounced the “hatred, bigotry and violence” of the day. By itself, that would have been passable. The president instead decided to add his own apparently improvised qualifier: “on many sides, on many sides.”

In other words, the white supremacist who rammed his Dodge Challenger into a crowd of anti-fascist protesters, killing Heyer and injuring 19 others, is on the same level as the counter-protesters who didn’t kill or severely injure anyone that day. This according to your president, the ironically dubbed “leader of the free world.” The president’s “many sides” line also appeared to link the deadly Charlottesville terrorist attack with Black Lives Matter protesters in Ferguson, Missouri, and other activists who, again, haven’t engaged in any acts of terror whatsoever nor are linked in any way to the Holocaust and other atrocities of World War II.

Making matters worse, the president refused to condemn the Nazis and white supremacists who assembled in the name of defending, in this case violently, the Robert E. Lee statue in Charlottesville and -- perhaps more importantly for them -- expressing their perceived grievances in an age of broadening equality and civil rights. Again, it’s worth repeating: The president refused to condemn Nazis -- actual, self-identified neo-Nazis with their snappy World War II German cosplayer regalia, their matching Nazi helmets, their khaki slacks and their combat boots.

We know exactly why Trump refused to say what so many other prominent Republicans and Democrats said in response. We know that Trump performs exclusively to his base. No one else matters beyond those represented best by his googly-eyed rally-attending disciples. These are people who largely do not identify as racists or Nazis, but who seem perfectly comfortable sticking it to perceived outsiders as well as the liberal benefactors of those “others.” We know that Trump has no problem with relentlessly blasting his enemies, yet neo-Nazis and white supremacists are somehow off limits.

Indeed, the only people Trump consistently refuses to condemn are Nazis, such as the Unite the Right goons in Charlottesville, and authoritarians such as President Rodrigo Duterte of the Philippines, President Recep Tayyip Erdoğan of Turkey, and, of course, Vladimir Putin. Trump was perfectly comfortable comparing the American intelligence community with “Nazi Germany” a few months back, but he defiantly refused to condemn the actual Nazis marching in his backyard, 90 minutes south of the White House.

Trump was more than happy to attack his own attorney general and his own party’s Senate leader. He condemned war hero John McCain. He repeatedly condemned the judges of the Ninth Circuit. Hell, Trump condemned both "Saturday Night Live" and Nordstrom. But he’s afraid to condemn despots like Putin or the Nazis who attacked American citizens in Charlottesville. Why? I think we know the answer.

By now you’ve probably seen the shocking video of the organizer of the Unite the Right gathering, Jason Kessler, being chased away by antifa protesters and others still hurting from Saturday’s tragedies. Knowing that our president, in addition to being a pawn of the Kremlin and a profound embarrassment to the nation, also happens to be an apparent sympathizer with Nazis and white supremacists, it’s past time that we make some hard choices as citizens.

Do we collectively demand the swift resignation or impeachment of the president for his trespasses, or do we continue to endure this tyrant through the next election, even though Trump’s accomplices in Moscow might well seek to skew the election in his favor again? Do we continue to tolerate Trump and his team of racist advisers and the actions of the pathetic young men they’re animating? If after only 207 days, neo-Nazis are so empowered by a sympathetic president to commit murders as they did on Saturday, what will America look like 207 days from now? What will America look like after Trump appoints more top officials while “deconstructing the administrative state” and dealing in unnecessary nuclear brinksmanship? Let us choose not to find out.

We’ve endured incompetent presidents before. We’ve endured criminals in the Oval Office before. But we’ve never had both a Nazi appeaser and an apparent Russian puppet in the White House before. Now we’re beginning to see the real and fatal consequences of allowing a terrifyingly incompetent villain to ascend to this station, and matters can absolutely get worse. There’s no silver lining here, just a raw and mandatory urgency for Donald Trump to be legally ejected from his intolerable stewardship of the American presidency.