"An Inconvenient Sequel" is good science with a fuzzy agenda

Al Gore's new documentary spends so much time focusing on him, and so little on science, that its goal is murky 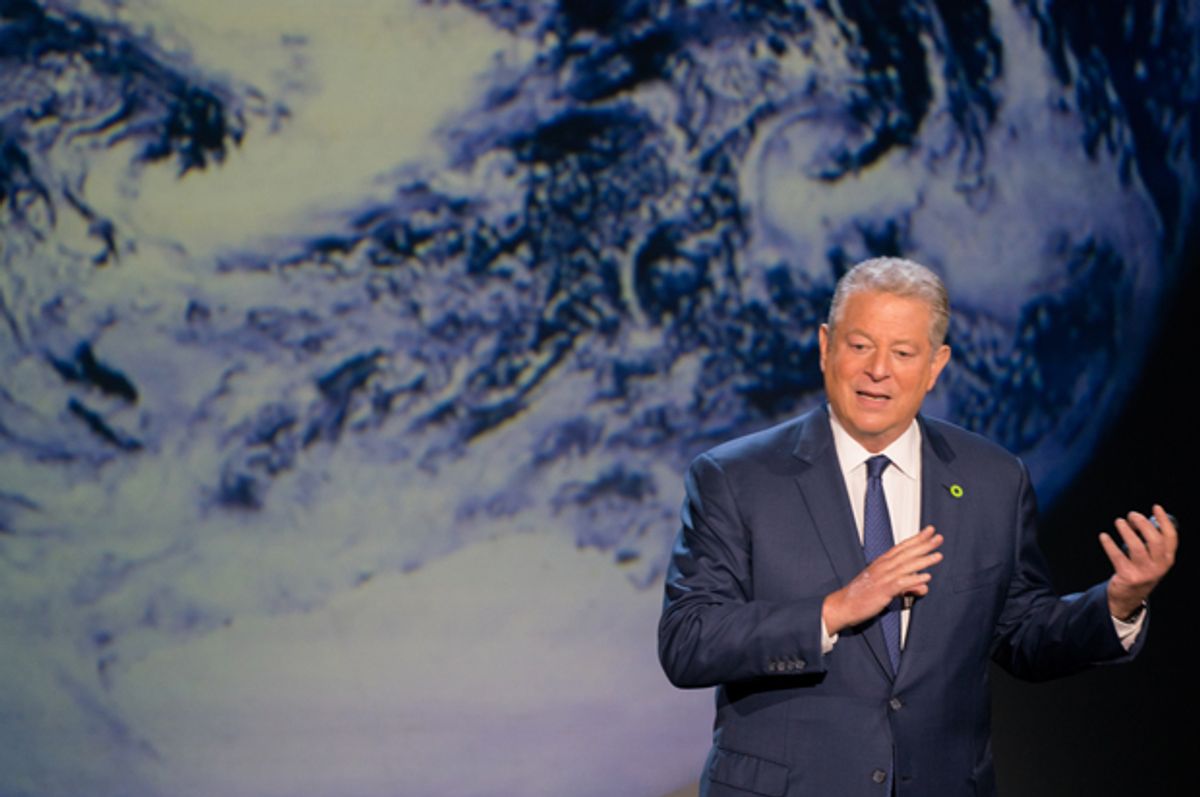 After the movie was over, the four of us were still discussing Gore's pop culture appearances. And that, more than anything else, is the chief failing of the film.

Of course, this isn't what the purveyors of pseudo-science would have you believe. Pundits like The Daily Caller's Michael Bastasch have been claiming that the global warming observations and predictions from "An Inconvenient Truth" ultimately "never came true" and have used that claim to smear Gore's new documentary about man-made climate change.

As has long been the case with the anthropogenic global warming deniers, however, their argument depends on disregarding the expertise of top scientists.

"Everything is heading in the direction of what Gore pointed out in 'An Inconvenient Truth,'" said Ken Caldeira of the Carnegie Institution for Science. "It might take us a little longer to get there than he suggested, but we will end up in the same place if we don't do something about our greenhouse gas emissions."

As Caldeira also explained earlier in his email to Salon, the various points cited by conservatives as discrediting Gore's earlier film actually reinforce his point about global warming. There has been a significant ice retreat on Mount Kilimanjaro over the past century, despite right-wing claims to the contrary; Arctic sea ice has plummeted since 1979, again despite conservative attempts to spin that fact; and although Bastasch insists there has been a global warming "hiatus," in fact "the last 3 years were the hottest 3 years on record, and the 15 years of the 'hiatus' were the warmest 15 years on record."

Kevin Trenberth, of the Climate Analysis Section at the U.S. National Center for Atmospheric Research (NCAR), made similar observations to Salon. After noting that he did not recall Gore making specific predictions in his first film and that if he did "any such predictions are posed as risks," he pointed out that man-made climate change costs billions of dollars in damage each year; that "glaciers are melting worldwide and the snow season is a lot shorter"; and that "heat waves have indeed increased and caused huge losses." Trenberth also echoed many of Caldeira's observations before closing by stating that "Al Gore’s warnings hold true today every bit as much as before."

This isn't to say that scientists are brimming with enthusiasm for "An Inconvenient Sequel." As Trenberth also mused in his email to Salon, "Whereas 'An Inconvenient Truth' seemed to be more about climate change, with Al Gore as a star, this movie seems to be about Al Gore, with climate change playing a secondary role."

I couldn't have put it better myself. While both films in Gore's "Inconvenient" series go into detail about the former vice president's biography, the insertions seem more egregious in the sequel than the original. With "An Inconvenient Truth," the bulk of Gore's intelligence, wit and passion was invested in breaking down climate science in such a way that the vast majority of viewers could easily understand the threat presented by man-made global warming.

The tensest and most exciting moments of "An Inconvenient Sequel," by contrast, are those in which Gore is front and center. In particular, we see the 2000 Democratic presidential nominee wheel and deal with Indian power-brokers to obtain that nation's support for the 2015 Paris climate accord. This is interesting and relevant material, of course, but the narrative often seems to focus more on promoting Gore as a hero than on impressing upon its audience the dire need for change.

Strangely enough, this creative decision would be more justifiable if Gore was running for president in 2020 (he makes it clear in the documentary that this is not the case). Just as Bernie Sanders was able to draw increased attention to the issue of income inequality through his 2016 presidential bid, so too could Gore quite literally change the world by running for president with a focus on global warming (a point I've made in the past). If "An Inconvenient Sequel" was meant to be the kickoff for a Gore 2020 campaign, its focus on Gore himself would make perfect sense. Barring that possibility, however, it simply muddles the film's purpose, if not its message.

Would I still recommend "An Inconvenient Sequel"? Sure, although I doubt there is much one could glean from this movie that couldn't be obtained by rewatching "An Inconvenient Truth." The thing about science is that it doesn't much care for the flawed human beings who try to interpret it. Man-made global warming will continue to threaten our species whether we admit it or not, and that reality remains as present in 2017 as it did in 2006.

There are worse ways to learn about this subject than to watch "An Inconvenient Sequel." It's just a shame that Gore didn't come up with a better one either.