What if the DNC Russian "hack" was really a leak after all? A new report raises questions media and Democrats would rather ignore 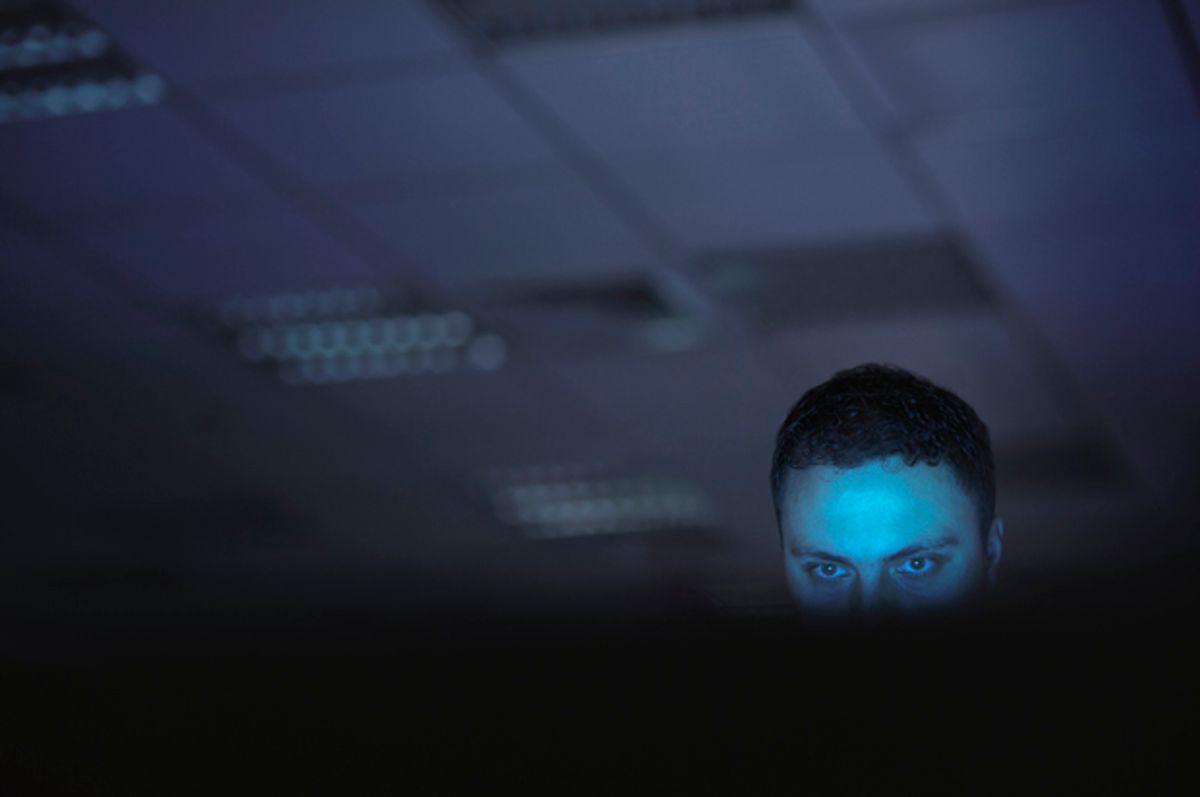 Last week the respected left-liberal magazine The Nation published an explosive article that details in great depth the findings of a new report -- authored in large part by former U.S. intelligence officers -- which claims to present forensic evidence that the Democratic National Committee was not hacked by the Russians in July 2016. Instead, the report alleges, the DNC suffered an insider leak, conducted in the Eastern time zone of the United States by someone with physical access to a DNC computer.

This report also claims there is no apparent evidence that the hacker known as Guccifer 2.0 — supposedly based in Romania — hacked the DNC on behalf of the Russian government. There is also no evidence, the report's authors say, that Guccifer handed documents over to WikiLeaks. Instead, the report says that the evidence and timeline of events suggests that Guccifer may have been conjured up in an attempt to deflect from the embarrassing information about Hillary Clinton’s presidential campaign that was released just before the Democratic National Convention. The investigators found that some of the "Guccifer" files had been deliberately altered by copying and pasting the text into a "Russianified" word-processing document with Russian-language settings.

If all this is true, these findings would constitute a massive embarrassment for not only the DNC itself but the media, which has breathlessly pushed the Russian hacking narrative for an entire year, almost without question but with little solid evidence to back it up.

You could easily be forgiven for not having heard about this latest development — because, perhaps to avoid potential embarrassment, the media has completely ignored it. Instead, to this point only a few right-wing sites have seen fit to publish follow-ups.

The original piece, authored by former Salon columnist Patrick Lawrence (also known as Patrick L. Smith) appeared in The Nation on Aug. 9. The findings it details are supported by a group of strongly credentialed and well-respected forensic investigators and former NSA and CIA officials. The group call themselves Veteran Intelligence Professionals for Sanity, or VIPS, and originally came together in 2003 to protest the use of faulty intelligence to justify the invasion of Iraq under President George W. Bush.

As of Aug. 12, the only well-known publications that have followed up on The Nation’s reporting are Breitbart News, the Washington Examiner and New York magazine (which described Lawrence's article as “too incoherent to even debunk,” and therefore provided no substantial rebuttal). Bloomberg addressed the report in an op-ed by one of its regular columnists.

The silence from mainstream outlets on this is interesting, if for no other reason than the information appears in a highly-regarded liberal magazine with a reputation for vigorous and thorough reporting — not some right-wing fringe conspiracy outlet carrying water for Donald Trump.

Maybe the logic goes that if mainstream journalists leave this untouched, that alone will be enough to discredit it. True believers in the Russian hack narrative can point to Breitbart’s coverage to dismiss this new information without consideration. That is not good enough. Lawrence's article, and the report behind it, deserves some proper attention.

Let’s back up for a second. Where did this report come from?

As explained by Lawrence, VIPS has been examining available information about the DNC hack and/or leak, but the group lacked access to all the data they needed because intelligence agencies refused to provide it.

One of the VIPS researchers on the DNC case, William Binney -- formerly the NSA’s technical director for world geopolitical and military analysis -- suggested in an interview with Lawrence that intelligence agencies have been hiding the lack of evidence for Russian hacking behind the claim that they must maintain secrecy to protect NSA programs.

At the same time, other anonymous forensic investigators have been working independently on the DNC case. They recently began sharing their findings via an obscure website called Disobedient Media. One of those anonymous investigators is known as the Forensicator. A man named Skip Folden, an IT executive at IBM for 33 years and a consultant for the FBI, Pentagon and Justice Department, acted as a liaison between VIPS and the Forensicator. Folden and other investigators have examined the evidence, attested to its professionalism, and sent a detailed technical report to the offices of special counsel Robert Mueller and Attorney General Jeff Sessions. VIPS believes this new evidence fills a “critical gap” in the DNC case. In a memorandum sent to President Trump, VIPS questions why the FBI, CIA and NSA neglected to perform any forensic analysis of the Guccifer documents, which were central to the narrative of Russian hacking.

VIPS states two things with what they describe as a high degree of certainty: There was no Russian hack on July 5, and the metadata from Guccifer’s June 15 document release was “synthetically tainted” with “Russian fingerprints.”

How did the group come to the conclusion that it was a leak, not a hack?

Investigators found that 1,976 megabytes of data were downloaded locally on July 5, 2016. The information was downloaded with a memory key or some other portable storage device. The download operation took 87 seconds — meaning the speed of transfer was 22.7 megabytes per second — “a speed that far exceeds an internet capability for a remote hack,” as Lawrence puts it. What’s more, they say, a transoceanic transfer would have been even slower (Guccifer claimed to be working from Romania).

“Based on the data we now have, what we’ve been calling a hack is impossible,” Folden told The Nation.

Further casting doubt on the official narrative is the fact the the DNC’s computer servers were never examined by the FBI. Instead, the agency relied on a report compiled by Crowdstrike, a cybersecurity firm compromised by serious conflicts of interest — the major one being that the firm was paid by the DNC itself to conduct its work. Another is that the firm’s owner is a senior fellow at the Atlantic Council, a think tank known for its hostility toward Russia.

The Intelligence Community Assessment published in January of this year, which claims “high confidence” in the Russian hacking theory, presented no hard evidence. Yet many in the media have relied on it as proof ever since. Ray McGovern, another VIPS member and formerly the chief of the CIA’s Soviet Foreign Policy Branch, called that intelligence assessment a “disgrace” to the profession.

The VIPS report also notes that the timing of events is strangely favorable to Hillary Clinton. It is hard to disagree.

On June 12, 2016, Julian Assange announced that he would publish documents related to Clinton’s campaign on WikiLeaks. Two days later, Crowdstrike, the firm paid by the DNC, suddenly announced the discovery of malware on DNC servers and claimed it had evidence that the Russians were responsible for it. This set in motion the narrative for Russian hacking.

A day after that, Guccifer appeared, took responsibility for the purported June 14 hack and announced that he was a WikiLeaks source, working on behalf of Russia. He then posted the documents which VIPS now claims were altered to make them appear more "Russian."

On July 5, two weeks later, Guccifer claimed responsibility for another hack — which the VIPS report categorically states can only have been a leak, based on the speed of data transfer.

As Lawrence suggests, this timing was convenient for the Clinton campaign, which could avoid dealing with the contents of the leaks by instead focusing on the sensational story of Russian hacking.

Since we’ve covered what is in the VIPS report, it is equally important to note what this report does not do. It does not claim to know who the leaker was or what his or her motives were. Lawrence is also careful to note that these findings do not prove or disprove any other theories implicating Russia in the 2016 election (such as possible Russian connections to Donald Trump's family and associates, etc.). This deals purely with the facts surrounding the DNC hack/leak last summer.

Many who have questioned the official version of events have sought to link the murder of Seth Rich to the theory that the DNC suffered a leak, not a hack. Rich, a 27-year-old DNC employee, was shot twice in the back as he walked home from a bar in Washington, five days after the supposed July 5 hack of the DNC’s servers.

Numerous unproven theories have surrounded Rich’s murder. There are those who suggest that Rich had been angered by the DNC’s treatment of Bernie Sanders, decided to leak information which would be damaging to Clinton's campaign, and was then murdered by Democratic operatives. Others have claimed that perhaps Rich had found evidence of Russian hacking and was murdered by Russian operatives.

There is no evidence for any of these theories — and neither VIPS nor Lawrence in his article attempt to link Rich’s murder to the hack/leak of information from the DNC. (Washington police have said since the night of Rich's death that he was the victim of an armed robbery attempt that went wrong.) Nonetheless, the emergence of this information may lend credence to those theories for those who want to believe them.

Instead of subjecting the various accounts of what happened last summer to rigorous scrutiny, the media instantly accepted the narrative promoted by the Clinton campaign and U.S. intelligence agencies. It has continued to do so ever since. Now, as new information comes to light, the media has largely acted as if it did not exist.

For the media and mainstream liberals to dismiss the information presented in Lawrence’s article as lacking in evidence would be breathtakingly ironic, given how little evidence they required to build a narrative to suit themselves and absolve Clinton of any responsibility for losing the election.

The authors of this report are highly experienced and well-regarded professionals. That they can be dismissed out of hand or ignored entirely is a sad commentary on the state of the media, which purports to be concerned by the plague of "fake news."

If these new findings are accurate, those who pushed the Russia hacking narrative with little evidence have a lot to answer for. The Clinton campaign promoted a narrative that has pushed U.S.-Russia relations to the brink at an incredibly dangerous time.

Unlike the cacophony of anonymous sources cited by the media over the past year, these experts are ready to put their names to their assertions. They expect that pundits, politicians and the media will cast doubt on their findings, but say they are “prepared to answer any substantive challenges on their merits.” That is more than any other investigators or intelligence agencies have offered to this point.

Given the seriousness of this new information, the DNC's official response to The Nation’s story is so lackluster it is almost laughable:

U.S. intelligence agencies have concluded the Russian government hacked the DNC in an attempt to interfere in the election. Any suggestion otherwise is false and is just another conspiracy theory like those pushed by Trump and his administration. It's unfortunate that The Nation has decided to join the conspiracy theorists to push this narrative.

The clear implication here is that anyone who questions what U.S. intelligence agencies “have concluded” is a conspiracy theorist pushing lies on behalf of Trump or Vladimir Putin. It is clear that the DNC expect the matter to be left at that, with no further inquiry from the media or anyone else.

By the looks of things, that’s exactly what will happen.