7 things to know about the mindset of the neo-Nazis

The era of the loud and proud white racist is upon us. 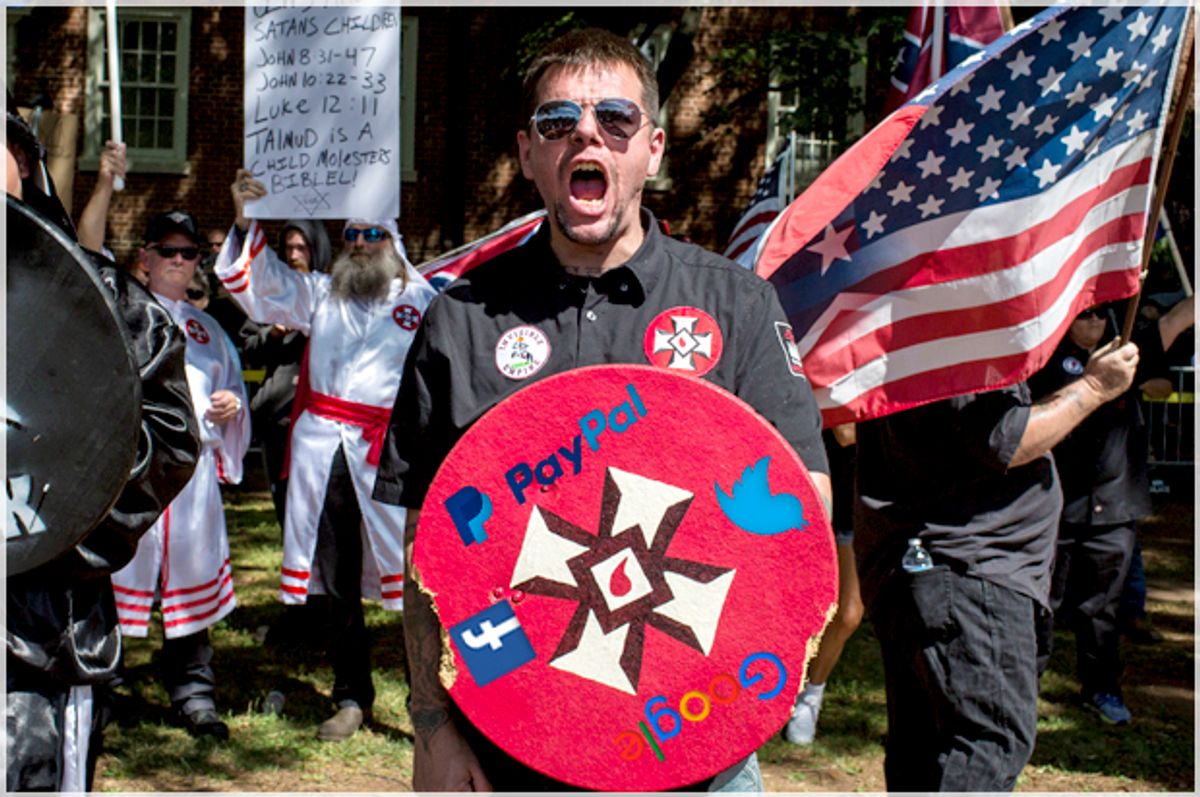 The neo-Nazis with whom Donald Trump openly sympathizes fit a psychological profile for the most part, according to two psychologists who just released a survey on the subject. Patrick Forscher and Nour Kteily, researchers from the University of Arkansas and Northwestern University respectively, compiled their findings into a working paper titled “A Psychological Profile of the Alt-Right.” To arrive at their conclusions, they polled 447 neo-Nazis who self-identify as members of the “alt-right,” and compared their answers with 382 non-group affiliated survey subjects.

Writing at Vox, Brian Resnick highlights Forscher and Kteily’s most salient conclusions. The two researchers found that much of what seems obvious about the neo-Nazis of the alt-right — their racist outlook, their dehumanization of others — holds true when members are questioned about their beliefs. Especially because the respondents were so forthcoming, as Resnick notes. The era of the loud and proud white racist is upon us, from Charlottesville to the White House.

Forscher and Kteily also found a slight schism among the self-identified alt-right respondents, with some skewing more extremist than others. They labeled the less extreme alt-right members “populists,” while more extreme members were clustered into a subgroup they called “supremacists.” They note that the difference might be a matter of indoctrination level. “It is possible, for example, that the clusters represent two stages in a developmental trajectory of alt-right identification, with people starting in the populist cluster and then moving into the supremacist cluster as they acquire more alt-right friends — a possibility consistent with our finding that those in the supremacist cluster were relatively ideologically embedded among fellow alt-righters. Becoming more embedded within alt-right social networks may further motivate people to express prejudice, both for value-based and normative reasons, causing more dehumanization and aggression.”

Forscher and Kteily hope that examining the thinking of alt-righties may contribute to changing their beliefs. “If we can change the motivation to express prejudice,” they suggested to Resnick, “maybe that gives us a way to prevent aggression.”

Here are seven things to know about the mindset of the alt-right.

Every time some white guy gets into major trouble, especially if it involves violence against others, someone brings up how quiet he was, what an unassuming loner he seemed to be. We’ve seen this a bunch of times before, from Dylann Roof to Adam Lanza, and now in the case of James Alex Field Jr., who viciously killed Heather Heyer with his car on Saturday. The New York Times cited sources who alternately described Field as a “very quiet little boy” who “had some trouble in school making friends” and “kept to himself a lot.” No one describes him as “no angel” — that kind of talk is reserved for unarmed black kids who are killed by cops — but it should be implied by the crime.

In any case, this inherently sympathetic idea doesn’t hold up here. The researchers write that “compared to the non-alt-right sample, the alt-right reported relatively similar levels of closeness . . . to their friends.” Sure, that doesn’t discount the idea that maybe some of these guys are archetypal loners who found community in the alt-right. But that never seems to engender much sympathy for gang members when they commit crimes, so not sure there’s much difference here.

Producing articles about the economic anxiety that plagues Trump’s base has become a virtual cottage industry at certain media outlets. (I see you, New York Times.) That’s a good way of ginning up sympathy for Trump’s most fervent supporters — including the alt-right — but a bad way of getting to the truth of what truly motivates them. The short answer to that question is, racism and bigotry.

Forscher and Kteily had alt-right respondents “assess each of their personal economic” situations and “rate whether they expected their personal and the national economic situations to get worse or improve.” Not only did respondents not report any uniquely high worries about the economy, researchers write that “the alt-right expected more improvement in the state of the economy relative to the non-alt-right sample.”

3. They think other groups are less human.

Unsurprisingly, alt-right adherents saw other racial and religious groups as less human and evolved than white people, who were rated, of course, as the most fully human of all.

Dehumanization is at the heart of every campaign of genocide and system of oppression. Dehumanization yields a justice system that criminalizes, over-polices and over-incarcerates entire groups, which is horrifying enough. When you continue the trend of describing people as not fully human, it becomes a lot easier to put them in gas chambers and internment camps; render them as chattel property; or kill off the native people of countries you've colonized.

Forscher explains it like this. When he runs these questions on samples of college students, he usually sees average scores around 2 (out of 9, meaning people largely don’t agree with these questions). “In the alt-right samples, I’m seeing numbers around 3 or 4, relatively close to the midpoint. In all the samples I’ve worked with, I haven’t seen means at that level.” In other words, members of the alt-right are unabashed in declaring their prejudices.

Why would you worry about expressing your prejudices when they're shared with people like the president? No wonder they’ve taken off the sheets and masks.

The alt-right grew out of trollism, a culture that festered and grew in the bowels of 4chan and Reddit. Studies of trolls have found they score highly in “dark triad” personality traits, a trio that includes narcissism, Machiavellianism and psychopathy. Turns out that the apple doesn’t far fall from the rotting tree. Alt-right adherents have higher than normal levels of these traits. Forscher and Kteily emphasize that these personality traits are “associated with callous, manipulative behavior.”

6. They are unashamedly aggressive.

Researchers looked into “the self-reported frequency of online and offline name-calling, physical threats, harassment, and making statements because others find them offensive” as well as doxxing “and sharing memes intended to offend others.” Alt-right respondents were much more likely to report engaging in those behaviors than non-members of the alt-right. Those who researchers identified as supremacists were most likely to admit having perpetrated those acts.

7. They believe in collective action for whites, and no one else.

An actual majority of white Americans believes anti-black racism is over, and a significant number believe whites experience more racism than blacks. So it’s not that surprising that members of the overwhelmingly white alt-right think like most of their white American counterparts. Guess that makes that thinking not so “fringe,” huh? These are the beliefs, by and large, of many white Americans.

Where alt-righties scored higher than other people is in their support for “collective action on behalf of white people.” In large part, they agreed with the statement, “I think there are good reasons to have organizations that look out for the interests of whites.” There’s a circularity here that seems self-evident: if you see yourself as a victim of some imaginary multicultural takeover and think groups that are focused on white power — like the alt-right or the Trump coalition — are doing the right thing, you’re likely to join those groups. The more indoctrinated you are as a member of those groups, the more likely you are to believe in their necessity, however much observable reality and peer-reviewed studies prove that thinking wrong.

For the record, despite the alt-right’s insistence that everyone should be proud and fight for their own rights, alt-right members were less keen on the idea in practice. They were particularly likely to register opposition to Black Lives Matter, and to agree with the statement, “I think [BLM] has been very harmful to our country.” (BLM has been bad for the U.S., by this logic, but the Klan hasn’t. Absolutely stunning how these people will twist rational thought to fit an agenda.) It’s worth noting that both the alt-right populists and white supremacists gave high levels of support to these ideas.