How do black conservatives feel about Confederate monuments? It's complicated 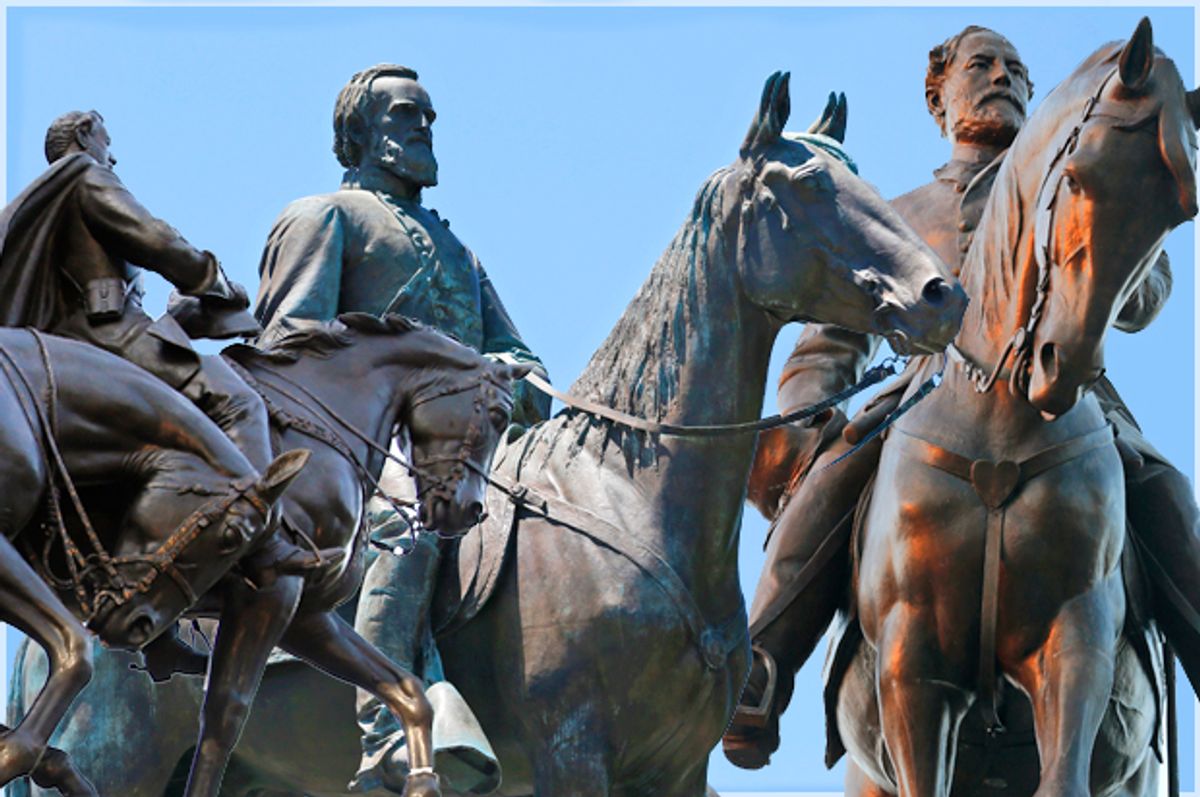 On Monday morning, a Confederate statue nicknamed "Old Joe" was decommissioned in Gainesville, Florida, after sitting outside the Alachua County administration building for over 100 years. In the wake of the tragic clash between neo-Nazis and counter-protestors in Charlottesville that left one counter-protester dead, states including North Carolina, Kentucky, Maryland, Tennessee, New York, and Louisiana all removed or pledged to remove effigies that memorialized the Confederacy.

But even as the "death" of Confederate statues seems to be an imminent prospect, a slew of people still oppose their removal — and surprisingly, they're not all white supremacists.

Sandra Crenshaw, a former city council member in Dallas, believes removing the memorials is futile. Crenshaw, who is black, has aligned herself with Buffalo Soldier historians and Sons of Confederate Veterans to create a predominantly black group that is working to protect Confederate memorials, such as the Confederate War Memorial, which sits at the heart of the city. The group argues that removing the statues would be a useless act guided by the false notion it will cure racism.

"Some people think that by taking a statue down, that’s going to erase racism," she continued. "Misguided."

Mayor Levar Stoney of Richmond, Virginia — another black politician — made a similar argument. Last week, he said he decided to keep the Confederate statues lining the city's Monument Avenue standing. The statues in question were in memoriam of Robert E. Lee, Matthew Fontaine Maury, J.E.B Stuart, Stonewall Jackson and Jefferson Davis — all of whom fought on the Confederate side of the Civil War. Instead of tearing them down, Stoney said he wanted to "set the historical record straight" by adding context to the memorial through signage and supplementary statues of African Americans, such as the first female bank president Maggie Walker, according to an official statement.

On Monday, Stoney echoed his statement during a groundbreaking for the American Civil War Museum. "Currently, as I’ve always said, since my remarks earlier on this year, the way those statues stand currently, they’re a shameful representation of the past that we all disagree with," he said. "For me, it’s about telling the complete truth. I don’t think removal of symbols does anything for telling the actual truth or changes the state and culture of racism in this country today."

Stoney soon changed his tone. On Thursday, in a series of tweets, he stated that the city will reexamine the future of the Avenue's Confederate monuments.

Stoney's office did not return requests for comment. Salon was unable to reach Crenshaw for comment either.

It is obvious removing the memorials won't erase racism, as both Crenshaw and Stoney argued, and as current events have made clear.

The "Unite the Right" riots that plagued Charlottesville last weekend served as a painful reminder that white supremacy within the United States is far from extinguished. The Southern Poverty Law Center reported that hate groups have been rejuvenated, and can thank President Donald Trump for their resurgence. Need proof? Just look at former KKK leader David Duke's reaction to Donald Trump's statements about Charlottesville.

Historians have debated if the removal of the statues would lead to the erasure of an important, yet painful part of American history — to which there has been no definitive answer. James Grossman, the executive director of the American Historical Association, told the New York Times that when monuments are altered, "you’re not changing history. You’re changing how we remember history."

"We would not want to whitewash our history by pretending that Jim Crow and disenfranchisement or massive resistance to the civil rights movement never happened," he continued. "That is the part of our history that these monuments testify to."

Removing Confederate statues may not be about reversing racism or erasing history. Indeed, the act of removing a Confederate statue is more symbolic, a means of ending the glorification of a short-lived white supremacist regime. In response to the dismantling of Confederate monuments, reactionaries have taken to openly waving Confederate flags and displaying swastikas on American streets. Still, there's a difference between memorializing the Civil War — the horrors on and off the battlefield that came with it, before it and after it — and glorifying the Confederacy and the dark history of American slavery.