Weeping Nazi started off as a "men's rights activist," which is no huge surprise 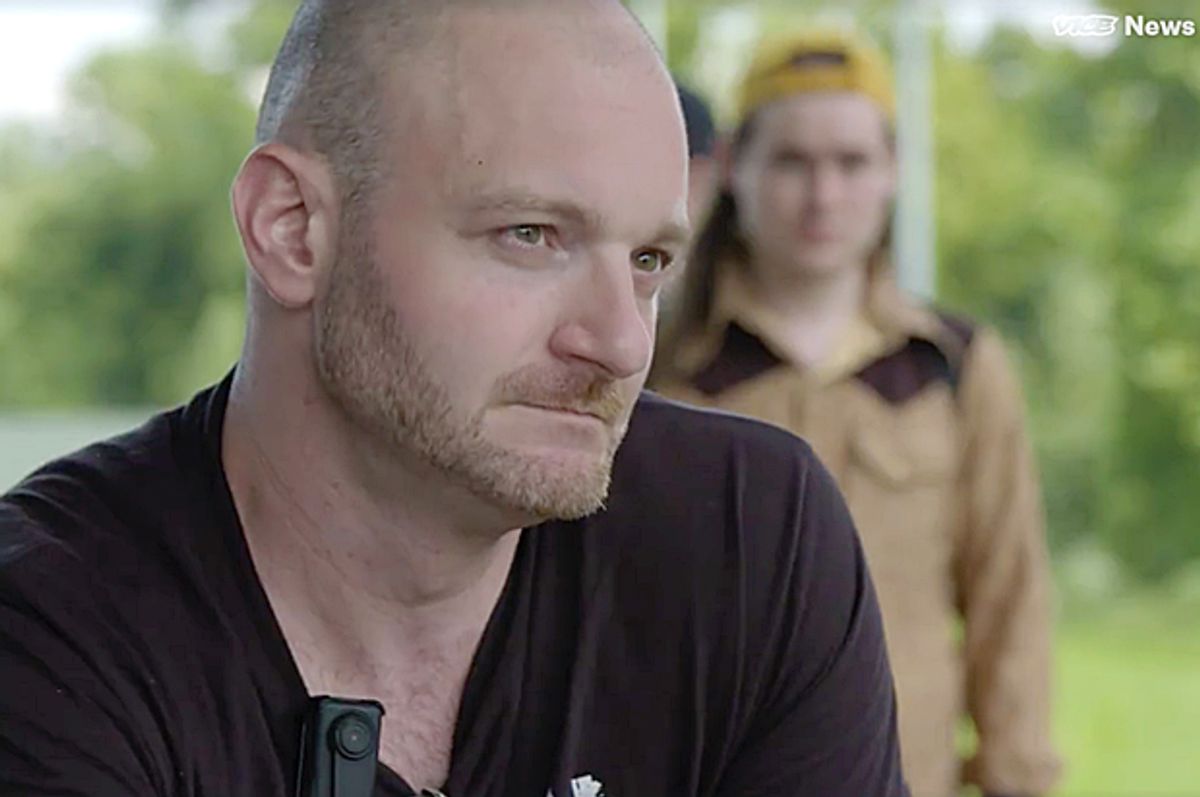 The white supremacist rally that turned violent — and then deadly — on Saturday was immediately documented by Vice News Tonight and its correspondent Elle Reeve, in a video documentary released on Monday. It wasn't just the turnaround speed that was impressive, but the level of access the Vice team got, largely due to the choice to embed with Christopher Cantwell, a self-appointed white supremacist leader whose big mouth and massive gun collection left an impression on the documentary's viewers.

Watching the documentary, it's clear enough how Vice got Cantwell to agree to be so closely followed and repeatedly interviewed: The guy craves the camera, repeatedly playing up his ugly views to Reeve, clearly knowing that he's giving good sound-bites that will make it into the documentary. It's no surprise, then, that Cantwell followed up the rally by posting a dramatic video to social media where he manages to cry for four minutes about his fear of arrest, all without shedding a tear. The video went viral, mostly because people want to see Nazis cry, and Cantwell scored even more attention for himself.

It also didn't take long for internet sleuths to figure out that the 36-year-old, who now hosts a white supremacist talk show, has quite a history of making a spectacle of himself and has rebranded as different flavors of jackass several times over the course of his illustrious career. Cantwell ran for Congress in 2010 as a Libertarian. He and two friends started the "Free Keane Squad," which made it to "The Colbert Report" in 2014 because their main form of activism appeared to be chasing meter maids around and harassing them for giving people parking tickets.

Cantwell also identified as a "men's rights activist" and wrote for the site A Voice for Men, one of the hubs of organized misogyny on the internet. He expressed his views that the state supposedly gives "women the power to have men arrested for anything without any evidence at all" and how women, in their roles of "traditionally carrying the role of raising children and supporting the men," did not evolve to have high IQs. Like men do. Allegedly.

It's yet another example of how the world of online anti-feminism has become a gateway to white supremacy. While there hasn't been any rigid academic analysis of this phenomenon, sites like We Hunted the Mammoth, which started as a way to monitor the various and overlapping worlds of online misogyny, have tracked that when men get together to gripe about their resentment of women's growing independence, they often start drifting toward talking about "white genocide" and other white supremacist ideas.

The world of online misogynists is a complex maze. Some of the communities are geared towards older, divorced men. Some are "pick-up artist" sites, geared towards younger men who think they aren't getting the female attention they believe they're due. Some identify as "men going their own way," which is to say giving up on women altogether. But what brings them together is anger over the fact that feminism has liberated women to date whomever they wish and leave marriages that aren't working. This makes it much harder, in the "men's rights" misogynist view, for men to acquire or keep the submissive female partners they feel entitled to.

Why hating women would lead so many men to hating nonwhite people is difficult to parse in logical terms. But racism and sexism aren't rational ideologies and really aren't bound by the basic rules of logic. At the root of both lies a thwarted sense of entitlement and a sense that women and people of color are somehow stealing what is the white man's due. That was felt most keenly in Charlottesville last Friday night, when the torch-wielding mob chanted, "You will not replace us!"

Cantwell himself mentioned one of the most common narratives that white supremacists and men's rights activists use to link the two ideologies together, by claiming that "their" women are being stolen from them by Jews and men of color. In one of his many interviews with Reeve, Cantwell sneers at Donald Trump for "giving his daughter to a Jew" and says, “I don’t think you can feel about race the way I do and watch that Kushner bastard walk around with that beautiful girl."

It's hard to know where to start with this statement, which is as delusional as it is offensive. What struck me most, watching the interview, is how delighted Cantwell is with himself. He's tickled at how shocking his anti-Semitic views are and pleased with the chance to tell an actual woman that he views women as objects for men to trade, rather than autonomous human beings.

That attention-seeking, misogynistic impulse is evident in the "Colbert Report" video as well. It's quite clear that the elaborate political arguments against parking meters are just a fig leaf for the real goal of the Free Keane Squad, which lies in the thrill of videotaping themselves harassing people, especially women. The levels of overcompensation for insecurity are almost too painful to look at. In the "Colbert Report" segment, Cantwell even says, "I find that when I carry a gun, people are very unlikely to hit me." That same pathetic impulse, to use lethal firearms as a shield against profound insecurity, is also evident in the Vice documentary, where Cantwell makes a big show of spreading out and unloading his weapons in front of Reeve.

The world of "men's rights" and "pick-up artists" is easy enough to ignore, since it's just a bunch of bitter losers eager to blame their personal failures on women who ignore them. Unfortunately, as this past weekend has shown, those bitter losers can become powerful, especially if they're organized and well-armed, and have managed to talk each other into acts of violence. The trick now is to understand the real threat they pose without empowering them further or giving them more of the attention they so desperately crave.