Why is the Justice Department targeting an online audience of over 1 million anarchists? 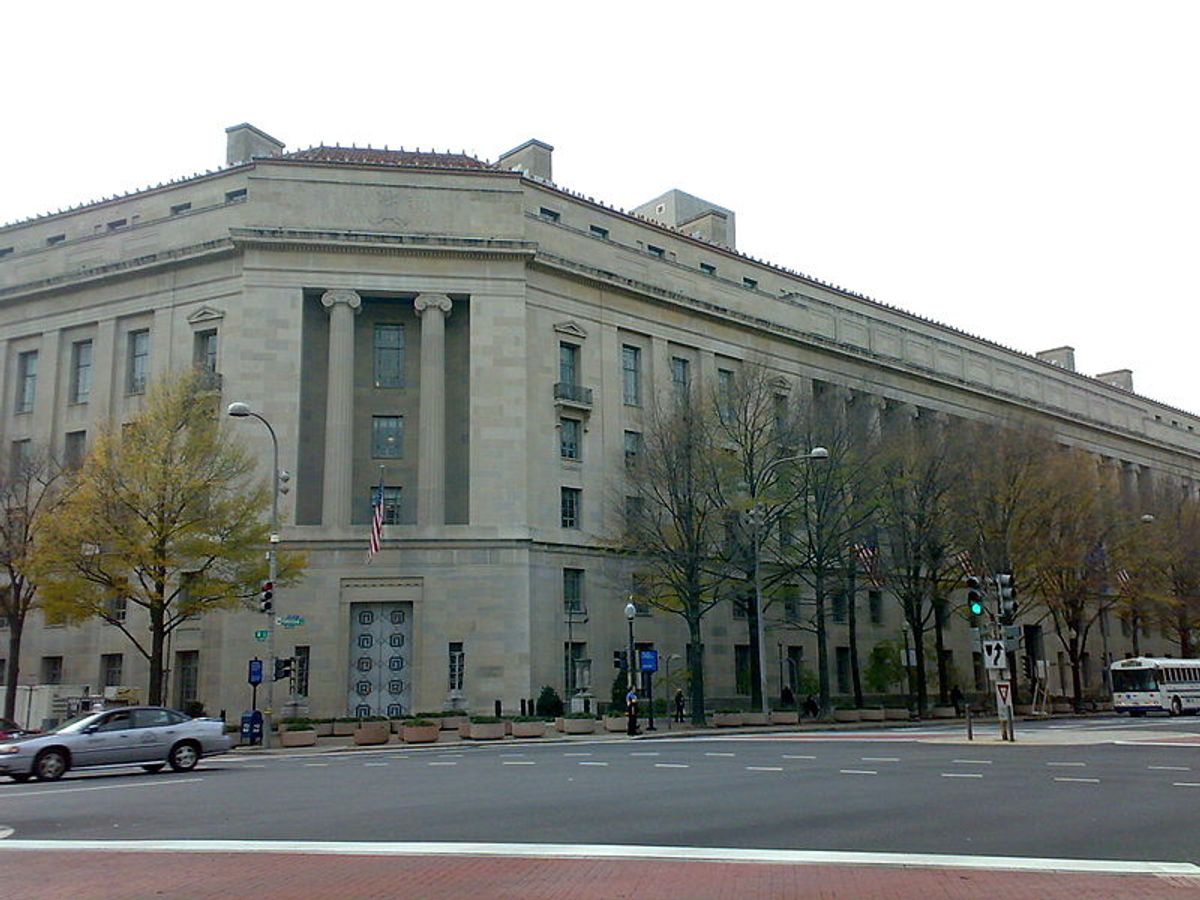 The US Department of Justice, Washington D.C. (Wikimedia)
--

The war on dissent is expanding exponentially.

In the first week of the Trump presidency, White House adviser Steve Bannon said the "media should shut up."

Last month, Jeff Sessions threatened to haul journalists before grand juries and force them to testify about their confidential sources or face jail time.

Last week, the Justice Department signaled its intention to go after 1.3 million visitors to an anti-Trump website. The Department of Justice served a search warrant for the electronic records of DreamHost, a Los Angeles-based firm that hosts the website of #DisruptJ20.org, a "direct action" collective that protested Trump’s inauguration, sometimes violently.

DreamHost is fighting the warrant, saying the information “could be used to identify any individuals who used this site to exercise and express political speech protected under the Constitution’s First Amendment. That should be enough to set alarm bells off in anyone’s mind.”

The Electronic Frontier Foundation has joined the fight, and the ACLU says its privacy lawyers are "assessing the situation."

In the search warrant, signed July 12 by John Borchert, deputy chief of the Felony Major Crimes Trial Section of the Justice Department, says the government seeks “evidence about individuals who participated, planned, organized or incited the January 20 riot.”

The government, he declared, wants “all information that might identify the subscribers . . . including names, addresses, telephone numbers and other identifiers, email addresses, business information . . . and source of payment for services including any credit card or bank account information.”

DreamHost is obeying the law requiring the disclosure of confidential information if it is relevant to an ongoing criminal investigation. The court filings in the case make clear that the firm shared information about disruptJ20.org within a week of Trump’s inauguration, including the registrant’s name, address and payment information.

In April, some 200 people were charged in connection with inauguration protests that resulted in the vandalism of a car and breaking of windows.

But when DreamHost received the far more sweeping request in July demanding information about all visitors to the group’s website, the company balked. The firm's attorneys asked Borchert for a meeting to address their concerns. Borchert responded by asking DreamHost to begin “rolling production” of records immediately.

Another tip-off: the government’s search warrant does not explain what would happen to the information the government obtained that is not subject to “seizure” because it is not evidence of a crime.

“In essence, the search warrant not only aims to identify the political dissidents of the current administration, but attempts to identify and understand what content each of these dissidents viewed on the website,” stated Raymond Aghaian, attorney for DreamHost, in an August 11 motion seeking to quash the warrant.

“No plausible explanation exists for a search warrant of this breadth, other than to cast a digital dragnet as broadly as possible,” writes Mark Rumold of the Electronic Frontier Foundation. He continues:

But the Fourth Amendment was designed to prohibit fishing expeditions like this. Those concerns are especially relevant here, where DOJ is investigating a website that served as a hub for the planning and exercise of First Amendment-protected activities.

This is abuse of power. DOJ is not there to investigate the President's political opponentshttps://t.co/DOvCc4JFPR

A Washington federal court judge will hear arguments in the case this Friday.