As the school year begins, a bitter battle over funding rages in Illinois 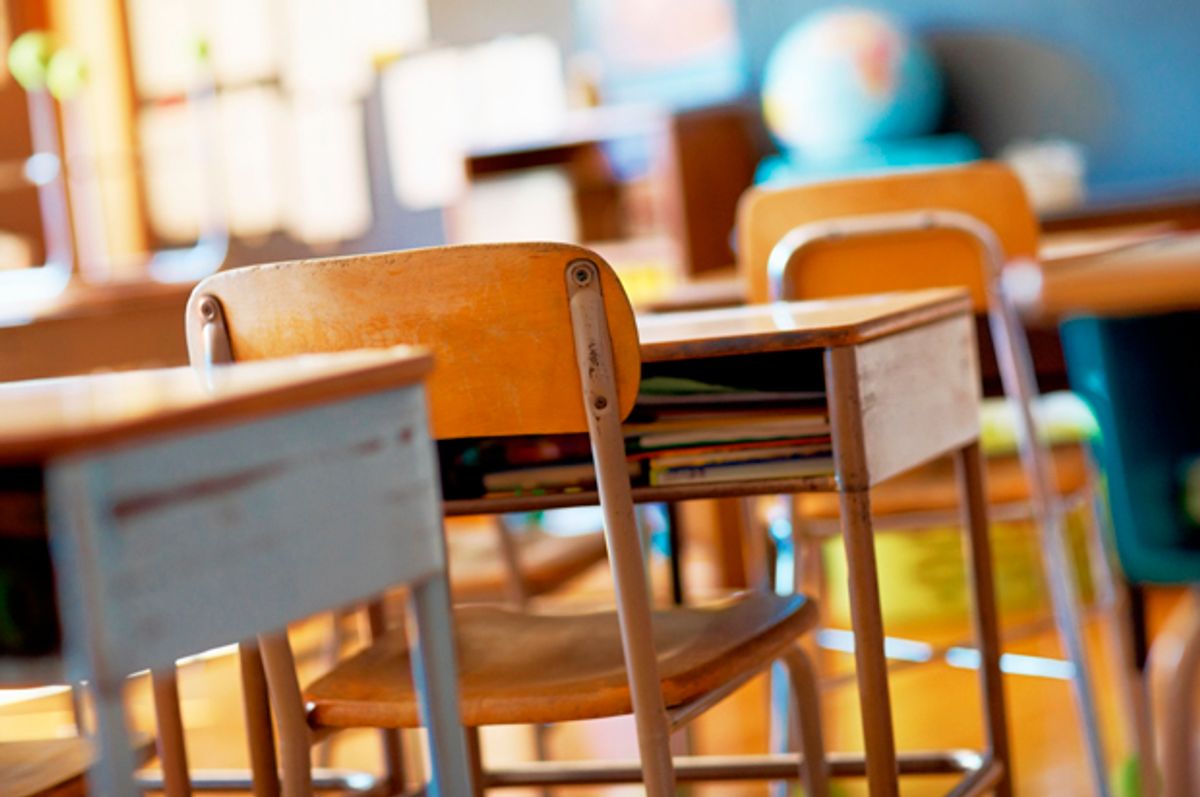 While the national education debate is largely focused on Betsy DeVos and school choice, the fiercest fights over the future of public education are playing out at the state level. This week, AlterNet begins a tour across the US to survey some of the biggest education battles. The first stop: Illinois, where Governor Bruce Rauner, a conservative billionaire, seems determined to blow up the state’s schools. AlterNet education editor Jennifer Berkshire talks to Dusty Rhodes, an education reporter for NPR in Illinois, about the high-stakes school funding showdown that's pitting the conservative billionaire Governor against the state's public schools.

Jennifer Berkshire: It seems like just weeks ago that we were cheering the fact that Illinois finally had a budget after two long years, during which the state’s higher education system nearly imploded. Help us understand what’s happening now.

Dusty Rhodes: We didn’t have a budget for two years, but the one thing they did fund was K-12 education. That’s because Bruce Rauner is the education governor and he cares very deeply about education, as he likes to remind us at his press conferences. When legislators overrode Rauner’s budget veto earlier this summer in a very dramatic fashion, Rauner’s response was to fire his top people and replace them with people from the Illinois Policy Institute, which is a right-wing think tank. The state’s payment to K-12 schools was due this week, and they’re going to miss it for the first time in Illinois’ history. We have a budget now. We just don’t have a way to fund public schools.

JB: In many ways what’s happening in Illinois is the same story that’s playing out across the industrial Midwest. Rauner and the Illinois Policy Institute don’t like taxes, unions and things with “public” in the name. But the showdown that's playing out now is also about an ambitious, even inspiring, effort to make the way Illinois funds its schools more fair. Fill us in.

DR: This summer, lawmakers passed what’s called Senate Bill 1. A young Senator named Andy Manar from a little town called Bunker Hill in west central Illinois really led the effort. Picture the lawmaker most likely to be played by a young Jimmy Stewart in the movie version of all of this. Really what SB 1 is is way of quantifying what kind of resources a school needs and coming up with what’s called an adequacy formula for each district. Our current school funding formula just says “here’s how much it costs to educate a kid in Illinois: $6,119.” Period. The current formula is also heavily dependent on property taxes property taxes, which means that areas with malls and fancy homes are able to spend considerably more on education. So we have a district that spends $32,000 a year per child and districts that spend $7000. This was Manar’s fourth attempt to try to make Illinois’ school funding system more fair. He’d tried every way you can think of and when SB1 passed, I was expecting a balloon drop. It was that euphoric.

JB: Alas, the movie version of Illinois’ school funding wars turns out to be more of a horror flick, complete with a Governor who some have nicknamed Governor Sauron after the bad guy in the Lord of the Rings. I’m going to close my eyes for this next part where you describe how Rauner used what’s called an amendatory veto to slash SB 1.

DR: When the Democrats finally sent Rauner the bill and he issued his amendatory veto,  what we call an AV, it was as though he did every mean thing he could think of to do to Chicago and then all these other school districts just suffer collateral damage. Chicago is infamous for its for TIFs (tax increment financing), so the Governor said ‘OK: we’re going to recalculate everything as though those TIFs don’t exist.’ That has the effect of making Chicago seem much wealthier than it is. Lots of cities have TIFs, not just Chicago, while others are subject to property tax caps. When you think about who designates a TIF, it’s not a school district, it’s a municipality or a county. Those boundaries and school districts don’t necessarily overlap. The other thing that’s important here is that Rauner just sort of slipped in there that pension costs get shifted to local school districts for future hires. That just ends up piling inequity on top of inequity. What’s going to happen to those poor districts that are already struggling to spend $7,000 per student?

JB: I grew up in central Illinois so remember well hearing lawmakers rail against “Chicago.” Especially in rural parts of the state, throwing the ‘C’ word around was a way of invoking race without ever explicitly talking about race. Is that true with this fight over school funding?

DR:  Lawmakers don’t make it explicitly racist on the floor but a lot of people perceive that undertone.  The problem with Illinois is that it has one big city and so you can demonize that city for the rest of the state. The next biggest school district after Chicago is 1/10th the size of the Chicago Public Schools. So lawmakers stand up and say “this is a bail out of Chicago,” or “this is about pensions for teachers in Chicago” or refer to “extra funds” that are going to the Chicago Public Schools. Chicago gets a $250 million block grant, but over the years their enrollment has dropped. They are not adequately funded even with that. I have heard the governor’s education czar state that those funds have been audited and there is no indication that they’re being used for anything other than the education of children. Implying that somehow that Chicago is getting more than what it’s entitled to plays well downstate.

JB: It’s unclear at this point whether all of Illinois’ schools will be able to open. But the Governor is providing the state’s youngsters with a lesson in civics, not to mention parliamentary procedure. I’m referring, of course, to Rauner’s seeming ignorance about how many votes he’d need in order to make Operation Collateral Damage a reality.

DR: I think what happened was that when Rauner fired his staff and replaced them with right-wing think tankers, he got rid of all of the people who actually knew stuff.  In the press conference where he came out to announce his amendatory veto, it was a big deal. It was in the fancy part of his office and it was completely full of reporters and every TV station from Chicago was there. A reporter asked him how he thought he was going to get ⅗ of the vote on anything he was proposing, to which the Governor said ‘it only takes a simple majority.’ But he was wrong. It takes a super majority to concur and it takes a super majority to override. If you don’t have either of those, than the Governor’s action functions as a pure veto and the whole thing goes down in flames, meaning that schools go without funding. He didn’t know that. A reporter asked him: shouldn’t your staff know this? Aren’t you scared that this whole thing could blow up? Rauner just blinked and blinked.

JB: In the meantime, there’s also a proposal for a ginormous school voucher program on the table, one that make close to 70% of students in Illinois eligible for public funds to attend private schools. This week, WBEZ in Chicago broke a story about how Mayor Rahm Emanuel indicated in an email that he’d be “open” to the possibility of school vouchers. The Governor has also indicated that he wants a $100 million voucher program in exchange for his signature on the school funding bill.

DR: Vouchers aren't part of SB1, nor are they mentioned in the Governor’s Amendatory Veto. So all that talk is happening behind closed doors. But Manar did indicate recently that negotiations have led up to the point of talking about "a signature and a trailer bill," meaning that the Gov would sign SB1 if they also put up another bill stuffed with goodies, like vouchers. When I asked Republican Senator Jason Barickman, who serves on the Governor’s Education Funding Reform Commission, about vouchers, we got sidetracked about whether parochial schools are private schools. So, that kind of says something.

JB: It seemed unthinkable that Illinois could possibly find a Governor with less appeal than the one who is currently cooling his heels in a federal correctional institution in Colorado — and yet here you are! Is it possible he could be re-elected?

DR: The Governor’s approval rating has dropped. But it’s also easy to demonize the Democratic Speaker of the House, so that’s what the Republicans do. We basically have two villains: Rauner and Mike Madigan, Darth Vader and the devil.  It’s hard to really like either one of them.