Steve Bannon, destroyer of worlds: After electing a president, he's back to building a right-wing media empire

Spurned by the monster he created, Bannon dreams of revenge — and sending Fox News to the dustbin of history 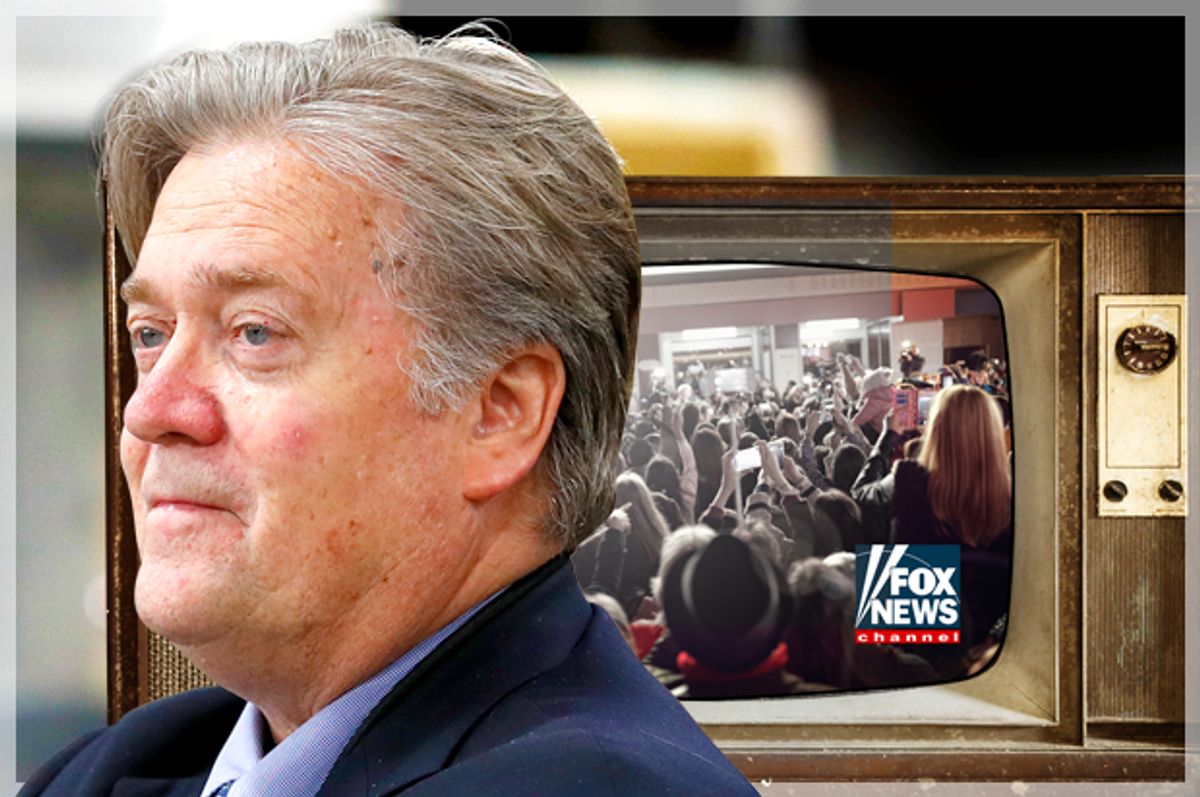 One thing you can say for Steve Bannon, the former presidential adviser and newly returned Breitbart News executive editor, is that he knows how to make an exit. Bannon's series of interviews both before and after being fired last Friday put chief antagonist Anthony Scaramucci's diva departure to shame (although Twitter wags were quick to point out that the first headlines from Breitbart News certainly evoked the memory of some of "The Mooch's" choice comments about Bannon).

Rumors had been out there since the spring that Bannon was on thin ice. And the reason given, then and now, that makes the most sense is that Donald Trump didn't like his minion receiving so much attention. He was angry last spring when Bannon made the cover of Time, which Trump considers to be such a tremendous honor that he constantly boasts about his own covers, even going so far as to mock up fake ones for Trump properties. The headline for Bannon's Time cover was even worse: "The Great Manipulator."

They seemed to have papered that over until recently, when Bannon was the subject of considerable press coverage after reporter Joshua Green's new book about him was published. Trump was reportedly upset that the cover featured an unappealing picture of him and that the title put Bannon's name first. Considering the president's overwhelming vanity and narcissism, I'm inclined to believe that was the ultimate reason he was fired.

Bannon's departure will have little effect on the Trump administration. Even if John Kelly succeeds in making the trains run on time, that doesn't solve the central problem of the Trump administration. Bannon was not the reason this dumpster fire of a presidency has exploded into a raging conflagration. He wasn't mouthing the words President Trump spoke in that odious press conference last Tuesday. He didn't force him to play chicken with the North Korean dictator Kim Jong-un the week before that. He certainly didn't have control of Trump's Twitter account, the window to the president's frightening mind.  Other than convincing the newbie Trump that the entire government bureaucracy is a "deep state" out to get him, Bannon has been no more influential on Trump's behavior than the latter's son Barron.

Bannon is, however, highly influential among Trump supporters, although not as much as when he was building the Trump mystique. As conservative talk show host and Never-Trumper Charlie Sykes has been pointing out for some time, Trumpism is not a movement -- it is now a full-fledged cult of personality in which the president's followers believe themselves to be under siege from the same forces Donald Trump rails against: the media, political correctness, elites of both parties, liberals, racial and ethnic minorities. The more they see Trump being attacked the more they identify with him.

Nonetheless, as I pointed out on Friday, Bannon is a professional propagandist with a feel for the right-wing Zeitgeist. We can expect that he will be a player going forward. He told people different things in his manic series of exit interviews, at once claiming the Trump presidency was effectively over and promising to go to war on its behalf. But it's pretty clear that Bannon is going to war for Bannon, and for a movement that he apparently believes still exists outside of Trump: “In many ways, I think I can be more effective fighting from the outside for the agenda President Trump ran on,” Bannon told The New York Times. (Emphasis mine.) “And anyone who stands in our way, we will go to war with.”

If the early stories coming out of Breitbart (which Bannon officially rejoined on Friday night) are any indication, he will first concentrate on settling scores. Here are a couple of headlines from over the weekend: “McMaster Of Disguise: Nat’l Security Adviser Endorsed Book That Advocates Quran-Kissing Apology Ceremonies” and "Report: Ivanka Trump Helped Push Steve Bannon out of the White House."

The New York Times reported that Bannon had met with Breitbart benefactors Robert and Rebekah Mercer on Monday night to plan his post-White House strategy. According to Axios, it's a much bigger deal than little old Breitbart.com:

Bannon has told friends he sees a massive opening to the right of Fox News, raising the possibility that he's going to start a network. . . . He believes Fox is heading in a squishy, globalist direction as the Murdoch sons assume more power. . . . His chief financial backer, Long Island hedge fund billionaire Bob Mercer, is ready to invest big in what's coming next, including a huge overseas expansion of Breitbart News.

Bannon may be right that Fox is a shadow of its former self. But the problem isn't that it's become squishy and "globalist." It's that for the last 20 years the whole network was pretty much a brothel, and since the departure of the sexual harasser Bill O'Reilly and the sexually harassed Megyn Kelly, its only "star" is Trump's smarmy sycophant Sean Hannity. Most importantly, the network lost Roger Ailes at the helm, the TV impresario who understood the Fox audience and would have understood how to effectively surf the Trump wave. Ratings are down and the network seems lost without him.

So, there's an opening in right-wing television news for something fresh. Bannon perceives of himself as an all around agitprop genius, but his terrible movies certainly don't demonstrate that. He may turn out to be more Trump hot air than Ailes-style brilliance.

As for the Breitbart new media extravaganza, back in October, Bloomberg's Joshua Green and Sasha Issenberg previewed Bannon's post-election plans (presuming Trump wouldn't win) with a big story about the site's plans for European expansion and a Mercer-funded merger between the Trump digital operation and Breitbart.com. Bannon told Green, “I wouldn’t have come aboard, even for Trump, if I hadn’t known they were building this massive Facebook and data engine. Facebook is what propelled Breitbart to a massive audience. We know its power.”

Whether Bannon will have access to all that juicy campaign data is unknown, but since he's funded by Mercer, a partial owner in the data mining company Cambridge Analytica, odds are he'll have plenty of technology to work with.

It's a new era for right-wing media (as for everyone else). For the last couple of decades the conservative media barons have been ahead of the political curve. We're about to find out if they've lost their touch.