Louise Linton: Bad at being a public servant, bad at being Instagram famous, but pretty quick to apologize 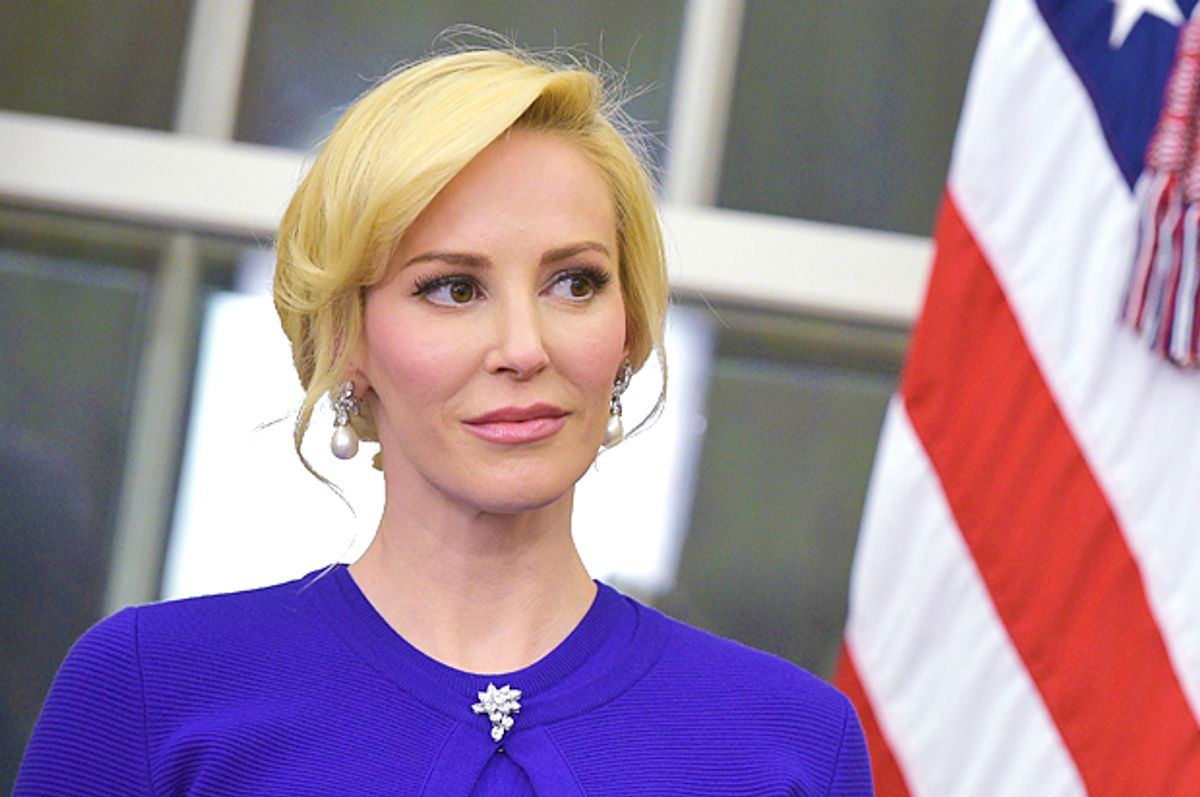 As the great philosopher Countess Luann once said, money can't buy you class. But when we're living in a moment in American history when our public servants know less about dignity than our Real Housewives, it's inevitable that fiascos that require apologies from folks like Louise Linton are going to happen.

Until this week, Linton was best known as the blonde actress who self-published a dubious — and swiftly debunked 2016 memoir of her youthful gap year in Zambia. Writing in The Washington Post last year, Karen Attiah observed that "If How Not to Write About Africa were an Olympic floor gymnastics event, Linton’s piece would be a strong contender for a gold medal." In June, Linton wed the US Secretary of the Treasury, former Goldman Sachs executive Steven Mnuchin. Since then she's been transitioning from "person who appeared on a single episode of 'CSI: NY'" to "person married to a high ranking government official." It's been rather bumpy.

On Instagram Monday, Linton posted a glamour photo of herself and her spouse stepping off a government plane in Kentucky, where Mnuchin was scheduled for a meeting on tax reform. "Great #daytrip to #Kentucky!" she captioned, adding the hashtags "#nicest, #people, #countryside, #rolandmouret, #hermesscarf, #tomford, #valentino, #usa." The post immediately raised eyebrows, including those of Portland mom of three, Jenni Miller. "Glad we could pay for your little getaway," she wrote, "#deplorable."

In case you've never known a Louise Linton or watched reality television, please use what happened next as a textbook example of what always happens next. Linton immediately pivoted from a cheerful aspiring brand ambassador to that ready-to-pull-your-extensions girl turning around her rings around outside the club. "Aw!!! Did you think this was a personal trip?! Adorable!" she wrote back. “Do you think the US govt paid for our honeymoon or personal travel?! Lololol. Have you given more to the economy than me and my husband? Either as an individual earner in taxes OR in self sacrifice to your country? I’m pretty sure we paid more taxes toward our day ‘trip’ than you did. Pretty sure the amount we sacrifice per year is a lot more than you’d be willing to sacrifice if the choice was yours. You’re adorably out of touch." She concluded by telling Miller that her life "looks cute." Yikes.

Word of Linton's poor manners soon spilled over to Twitter, and in short order, she edited her post removed the brands, and then made her social media accounts private.  I could be wrong, but I'm probably not, when I estimate that Linton is currently sharing a salad with her besties and fuming about how really mean people are on the internet.

As a colleague recently pointed out, perhaps for a person of — let's be kind and say average intelligence — it's easy to conflate the Obamas with the Kardashians. And surely a woman who has been an actress, one with a history of shilling bags on social media, would consider the people who follow her on Instagram as fans rather than her family's constituents. The notion that she might consider her new role a call to duty does not yet seem to have crossed her mind. But her unhinged rant about taxes aside, she's not even playing the role of celebrity well either.

As social media amply proved on Tuesday, girl, it's one thing to flaunt an outfit that cost roughly 20 G's; you've got to at least do it with some style. The world is full of recreational fashion watchers, and we all know a two-years-ago pair of designer pumps when we see them. We all know that a Birkin, like an LV logo Speedy, is for ladies who need to scream MY BAG COST OF A LOT OF MONEY. From her "Tom Ford sunnies" to the Hermes scarf she was inexplicably clutching, there was not an element of Linton's ensemble that didn't telegraph trying too hard. Sure, her sartorial thirstiness is understandable to any of us who ever had a teenage moment of believing that a Cartier Love bracelet or pair of Cavalli jeans could change our lives, but it's also really transparent in a 36-year-old woman.

The most blatant giveaway in all of it — even worse than the way Linton's photo was so carefully shot and posed — was in the hashtagging. A Treasury Department spokesman confirmed to The Washington Post Tuesday that "Linton did not receive any financial compensation for mentioning the fashion brands that she tagged in her Instagram post." But anybody with an Insta account knows that hashtagging brands is a public plea for them to at least throw you some free stuff. Desperation tagging is a thing, and it's quite obvious when you see it. Furthermore, hashtagging random words like "nicest" suggests Linton may truly not know how either hashtagging or words work. And if she'd simply captioned the photo "Great daytrip to Kentucky!" she likely would never have wound up berating a stranger in the first place.

Fashion is fun, and luxury and couture have their role in public life. But women like Michelle Obama and Catherine, Duchess of Cambridge know how to rock designer clothes in a way that conveys their elegance and personal style. Linton, on the other hand, has in her extremely brief career as a political wife already revealed herself a fragile egotist and an unimaginative stylist. And there's no handbag in the world big enough to hide behind, once you've shown the world your true colors.