Mike Pence says we shouldn't try to erase our history. He's right, but not for the reason that he thinks he is 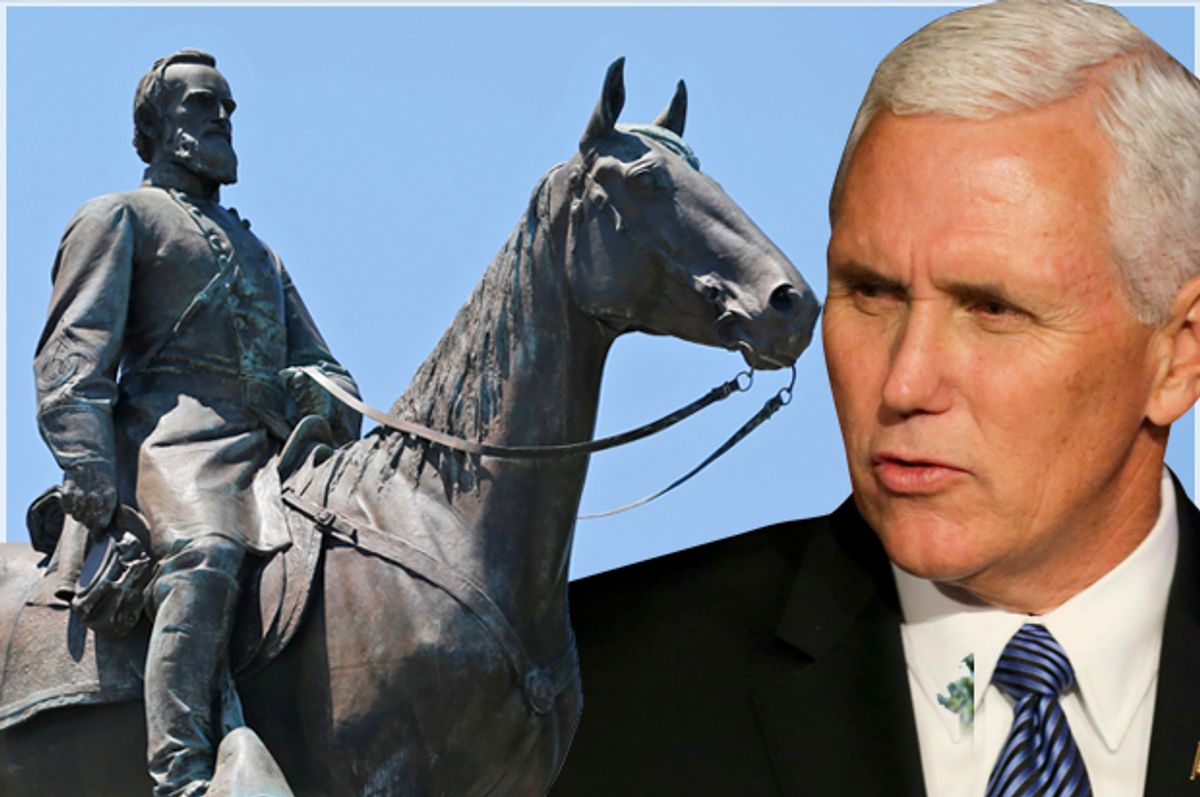 Vice President Mike Pence decided to ape the rhetoric of his commander-in-chief during a Tuesday interview with "Fox & Friends" host Ainsley Earhardt. In the process, he helped illustrate precisely how wrongheaded the Confederate monument defenses really are.

"I agree with the president that seeing people destroy public property in the name of any cause is just simply unacceptable," Pence began. While he probably would have avoided trouble had he stopped his argument there, he moved on to claim that the Confederate memorials are important so "that we remember our past and build on the progress that we've made."

Pence later added, "What we have to walk away from is the desire by some to erase parts of our history in the name of some contemporary political cause."

Pence wasn’t alone among the Fox News chattering heads to offer a distinctly reactionary view on Confederate monuments. After denouncing House Minority Leader Nancy Pelosi’s support of removing Confederate monuments in Washington on the grounds that it would “tear down pieces of America, American culture and American history," ex-Trump spox Katrina Pierson also compared movements to take down those statues with the destruction of cultural properties by ISIS.

Both Pence and Pierson committed the same straw man argument taken by those who don't want to see the statues removed. The people arguing that Confederate monuments should be taken down aren't trying to erase American history but rather make sure that the prevailing narrative doesn't dignify (much less glorify) the cause of maintaining racially-based slavery.

Imagine if America had monuments celebrating Nazis who fought and died for the Third Reich during World War II. How about if the memorials at Pearl Harbor honored the Japanese military commanders responsible for their sneak attack against an unsuspecting city? Or what if there was a 9/11 memorial that honored the Islamist terrorists who lost their lives in order to massacre innocent Americans?

If these hypothetical scenarios strike you as offensive, consider how you'd react if someone tried to minimize your concerns by responding, "What, are you trying to erase history?"

Not only is this not the case, but if anything, the truth is exactly the opposite. People who want to tear down Confederate statues do so precisely because they insist that this ugly chapter of American history be remembered — and, more importantly, remembered correctly.

This means making a point of not glorifying individuals who fought for the cause of enslaving another race, as Robert E. Lee and Stonewall Jackson did. The purpose is not to erase a culture or a narrative, but to make sure that America stops publicly celebrating a cause that was every bit as toxic as the ones supported by the Japanese and Nazis during World War II and the terrorists on 9/11.

If Pence and Pierson are sincere that there's a difference between keeping Confederate monuments as remembering history — and not whitewashing it — maybe it's time to change how the Civil War is memorialized.