Rex Tillerson undercuts Trump on Afghanistan: "We may not win"

Tillerson to the Taliban: "You will not win a battlefield victory. We may not win one, but neither will you" 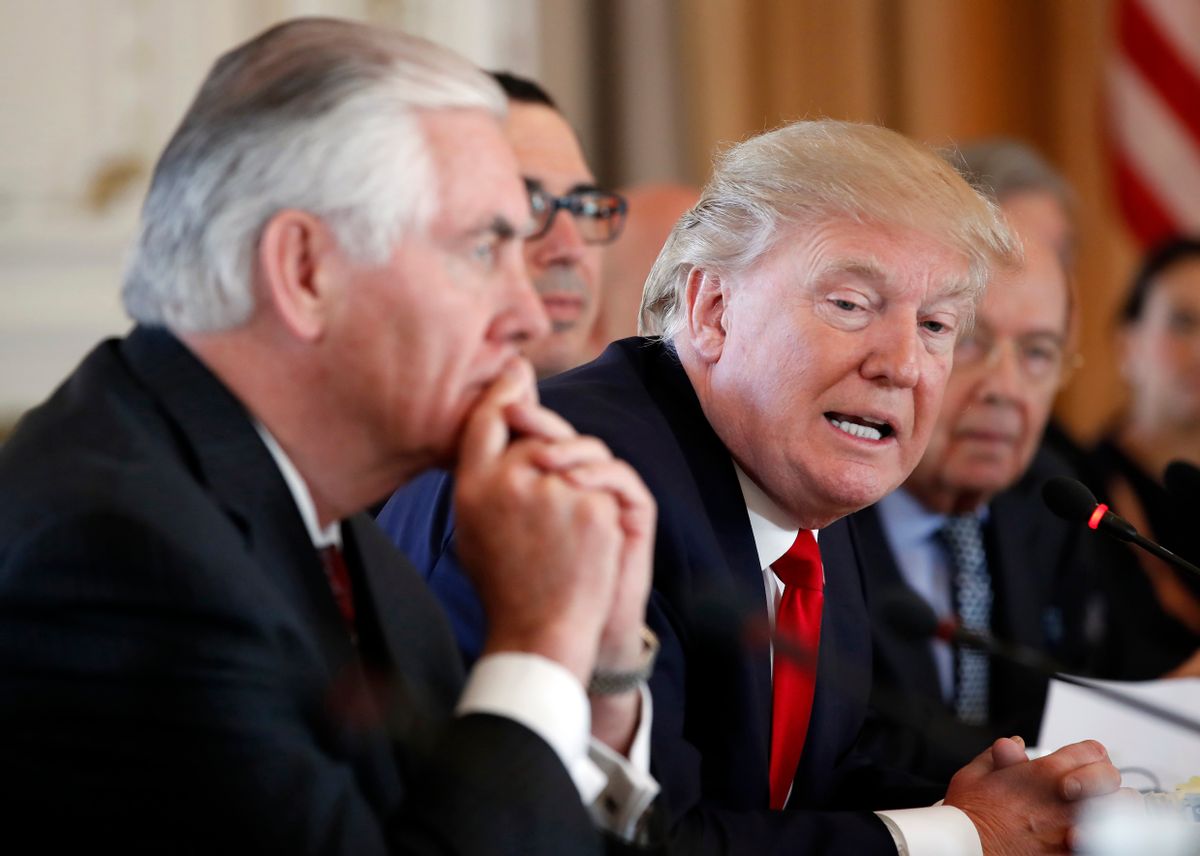 After President Donald Trump announced on Monday night that he would send additional troops to fight the war in Afghanistan, Secretary of State Rex Tillerson made additional remarks on Tuesday that apperaed to undercut the commander-in-chief's war rhetoric.

During a press briefing in which he once again called on Pakistan to end their alleged support for terrorist organizations, Tillerson said that the U.S. is open to negotiating with the Taliban without requiring preconditions.

also said that the U.S. is open to negotiating with the Taliban without requiring preconditions.

"Our new strategy breaks from previous approaches that set artificial calendar-based deadlines. We are making clear to the Taliban that they will not win on the battlefield," Tillerson said in a statement on Monday after the president's address. "The Taliban has a path to peace and political legitimacy through a negotiated political settlement to end the war."

The former Exxon Mobil CEO went on to say that "We stand ready to support peace talks between the Afghan government and the Taliban without preconditions. We look to the international community, particularly Afghanistan’s neighbors, to join us in supporting an Afghan peace process."

During the press briefing on Tuesday, Tillerson told reporters that "this entire effort is intended to put pressure on the Taliban, to have the Taliban understand that you will not win a battlefield victory. We may not win one, but neither will you."

"At some point, we have to come to the negotiating table and find a way to bring this to an end," Tillerson added. "We're there to facilitate and ensure that there is a pathway for reconciliation and peace talks...We do, we believe we already know, there are certain moderate elements of the Taliban who we think are going to be ready and want to help develop a way forward."

In terms of a timeline for those negotiations, Tillerson reiterated that it could only be determined over time "by conditions on the ground."

His Tuesday realism stands in stark contrast to Trump's optimistic outlook on the 16-year-old war. “We will always win,” the president asserted Monday night.  “I'm a problem-solver, and in the end, we will win.”

Tillerson also said Pakistan was providing a "safe haven" for terrorist organizations and called on them to take further action in order to help the U.S. "Pakistan must adopt a different approach. And we are ready to work with them to help them protect themselves against these terror organizations and certainly to end their attacks that are disrupting our efforts at peace," Tillerson said during the press briefing.

The Taliban now controls or contests 40 percent of Afghanistan, and vowed in a statement to "make this country the 21st-century graveyard for the American empire," if the U.S. does not permanently withdraw its military forces, according to NBC News.

"We know how to defend our motherland," a Taliban commander told NBC. "If we could fight this war for 16 years with limited resources against the world's well-equipped armies, we are happy to continue this fight against the enemy."

Tillerson said that "environment today is not conducive to carrying out" negotiation tactics, but that the U.S. will engage "when conditions permit us to engage." Which he said, is why "Pakistan is very important in this discussion as well."