Tale of two cities: Boston and Charlottesville show how to fight fascism — don't give the right what it wants

By denying the "alt-right" the "both sides do it" narrative, progressives won in the court of public opinion 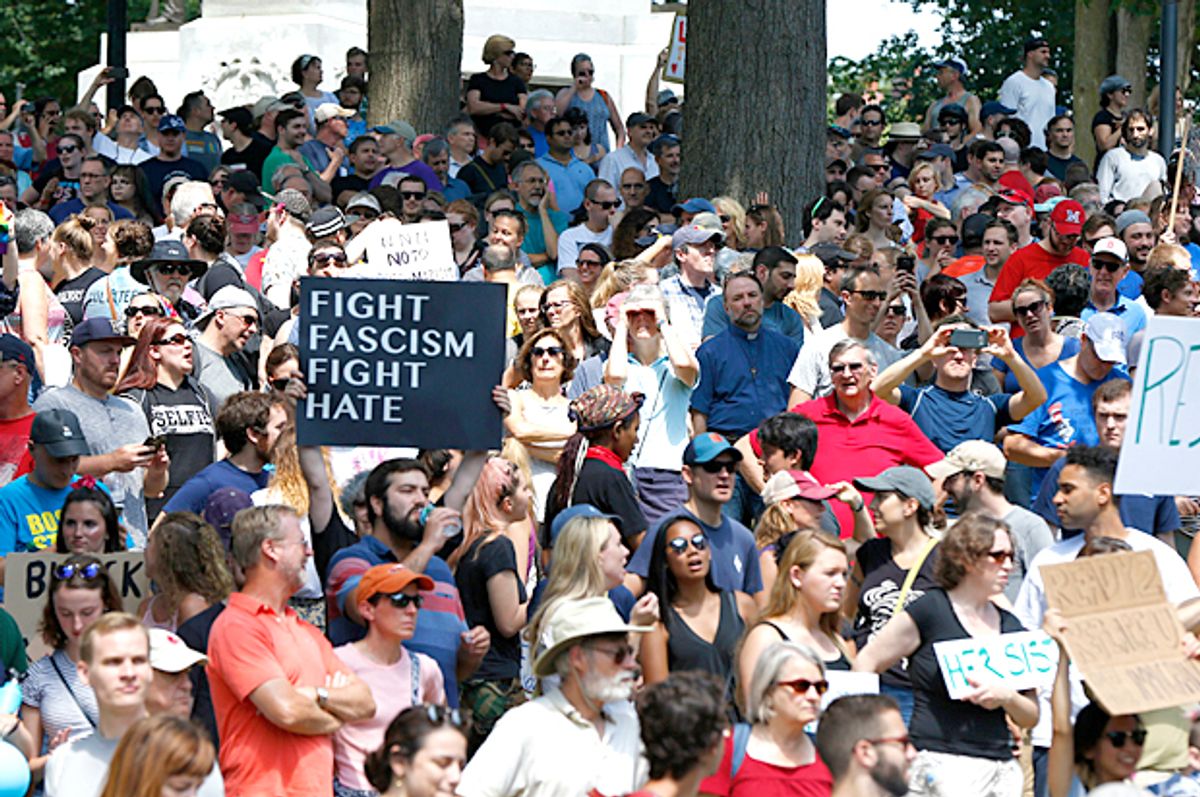 The far right rally over the weekend in Boston -- branded as a "free speech" rally -- was an opportunity for the neo-fascists in our midst to regain ground in the court of public opinion after the now-infamous rally in Charlottesville that ended with one woman dead and another man hospitalized with a stroke caused by his injuries. Instead, the Boston event became an example of how progressives can hamstring right-wing efforts to portray fascists sympathetically and manipulate the public into buying into a false equivalence between the far right and the activist left.

The "alt-right" strategy, as in the past, is to hold "rallies" that are thinly disguised excuses to start street brawls with leftist counter-protesters, particularly those that call themselves "antifa" and who don't hold back from physical confrontation. By portraying themselves as victims of violent leftists, the would-be fascists hope to elevate their own status and degrade that of anti-fascists by creating a dialogue about how "both sides" are to blame for the violence and disorder.

That strategy failed after Charlottesville, because the violence, particularly the terrorist attack by car, was so clearly one-sided. Even though Donald Trump and some of his supporters tried to run the "both sides do it" narrative, some even arguing that the anti-fascists or "alt-left" were worse, it was hard to minimize the public loathing of white supremacists after one of them slammed a car into a crowd of peaceful protesters.

Going into the weekend, I began to dread that the far right would be able to regain momentum by provoking public brawls with leftists and entrenching this "both sides" narrative. That didn't happen, and the reasons why should teach progressives a lot about how to deal with this conglomeration of bigots, far right types and neo-Nazis going forward.

The Boston police banned people from bringing weapons or anything that could be used as a weapon to the rally area. They also put up barricades around the rally area to keep counter-demonstrators out. These obstacles made it nearly impossible for the far right protesters to provoke street fights, and, unsurprisingly, only a few dozen, at most, even bothered to turn out. That was far fewer than showed up in Charlottesville, where they were given a lot freer rein to carry weapons and shields and to pursue direct physical confrontation with counter-protesters.

Despite the constant drumbeat of rhetoric about "free speech" from the far right, they aren't actually interested in speech. They were allowed to speak freely and at length in Boston — and to be clear, no one has tried to restrict the free speech rights of even the most odious white supremacists — and they quickly got bored. Those who did show up mostly left early, and the rally petered out long before it was expected to.

The lesson of Boston and Charlottesville is clear: What the far right wants is physical confrontation. It wants to act tough and scare people, and, of course, it wants the opportunity to play the victim. These real-world trolls don't care about anything else, including listening to each other spout their so-called ideas.

The good news is, that by making their motivations so nakedly obvious, the far right organizers have made it clear how to resist them: By denying them the physical confrontation they desire.

This is not the same as claiming that if we ignore them they'll go away. The other lesson of Boston is that passionate, nonviolent counter-protest has value. Thousands of counter-protesters showed up in Boston on Saturday, and they were able to hijack the news cycle and turn it away from hate and towards a message of love and anti-racism.

Mostly, they made the far right rally-goers look like fools. Perhaps the best moment was when a woman gave a young man in half-assed Confederate cosplay the two-fingered New York salute, which led to a bunch of people on Twitter making Ken Burns documentary jokes.

White supremacists and their "alt-lite" supporters unquestionably pose a threat. As I've reported for Salon, right-wing media is busily trying to mainstream white supremacist arguments and apologetics. These folks are organizing online and are making tactically smart decisions, particularly when it comes to targeting college-age men by appealing to their anxieties about dating in the age of feminism or having to compete in a career field with women and people of color.

Still, progressives have gained valuable wisdom from the past two weeks that can be used going forward to deaden the impact of the burgeoning fascist movement. The most important lesson is that whoever is perceived as violent will lose in the court of public opinion. The other lesson is that all the excuses the hard right uses — "preserving history" and "free speech" being the two favorites right now — are paper-thin excuses for the real goal, which is provoking violence.

In light of this, it's largely useless to confront wannabe fascists with either violence or rational arguments. The lesson of Boston is that meeting the hard right with shame and mockery, while offering a counter-vision of anti-racism and love, works. Instead of trying to change the minds of the Pepe the Frog crowd, progressives appealed to the better natures of the public at large. It might not be as sexy as pitched battles in the street, but it worked. It will keep working, if we can keep it up.