It may be a false flag video, but watching Alex Jones heckled on the street is amazing 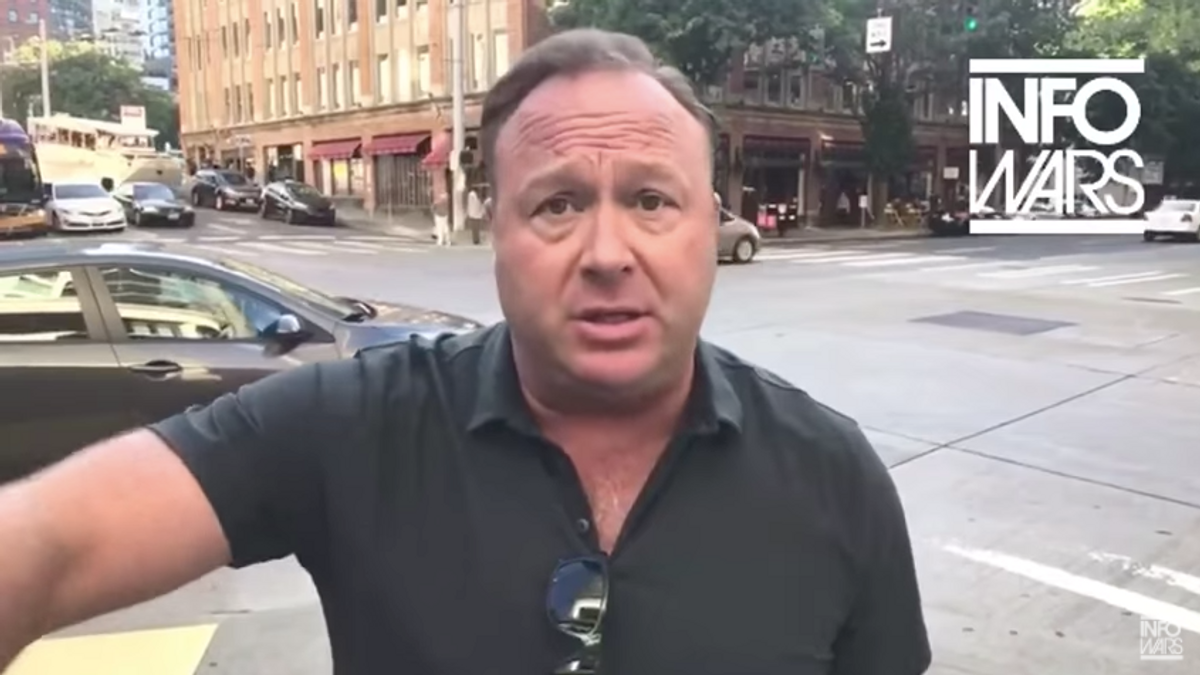 "I'm changing society, not you!" yells far-right conspiracy theorist and creator of Infowars, Alex Jones, at a random citizen of Seattle who heckled him during his live news broadcast.

Jones was broadcasting live from the streets of Seattle, which according to him is home to "the biggest cucks on the planet." Maybe it's a bit of performance art and maybe it's people screaming at him. Either way, it's a wonderful piece of video.

One woman approached Jones during his broadcast on a street corner and told him, "I just wanted to stop and tell you that I think your show is terrible." Jones attempted to ask her questions about the economy under President Donald Trump and how newspapers, he claimed, said that the economy was going to implode after various CEO's resigned from an economic advisory board because of his failure to properly condemn violence in Charlottesville. The president ultimately dismantled the board.

The man then crossed the street after Jones confronted him and tauntingly flipped Jones off again with both of his hands. The Infowars host was riled up and chased after him as if he were the T-1000 in the movie "Terminator 2." Jones caught up with the man and stepped in front of him while continuing to yell at him.

"Fuck off," the man can be heard saying.

"No you fuck off," Jones said.

"I am fucking off," the man said with a grin as he walked away.

After further banter Jones said "you know something, I'm not afraid of you people. You got something to say, say it. You have nothing intellectual."

In the next scene a man can be heard shouting "you're trash" at Jones from a distance. Jones quickly turned around to find the heckler and yelled "come here, coward."

After catching up with the man, Jones pointed at the camera and said, "Tell people intellectually who you are."

"I'm your momma," the man, later identified as Seattle resident Jake Stratton, replied. He then proceeded to pour his coffee on Jones and backed away, laughing at him, and said, "I've got to get to work, where they have more coffee."

"This is the brainwashing, you see, and I'm proud of this," Jones said, looking into the camera. "Because this is who they are . . . That's why they're allied with jihadis because they hate the West so much." The coffee incident quickly went viral on Twitter and some have even questioned the validity of it, and claim — with not a hint of irony — that it could have been staged. After the incident, Seattle Police tweeted that there were "no official reports. As far as we know that could be an actor playing Alex Jones."

Real or fake coffee attack, Jones continued with his broadcast, grabbing the attention of a man on a bicycle who told Jones, "I don't talk to racist fucks."

"There ya go," Jones said. "They cannot even talk."

Watch the full video for yourself, below.