Now the Libertarians have known sin: Reckoning with the rise of the "alt-right" 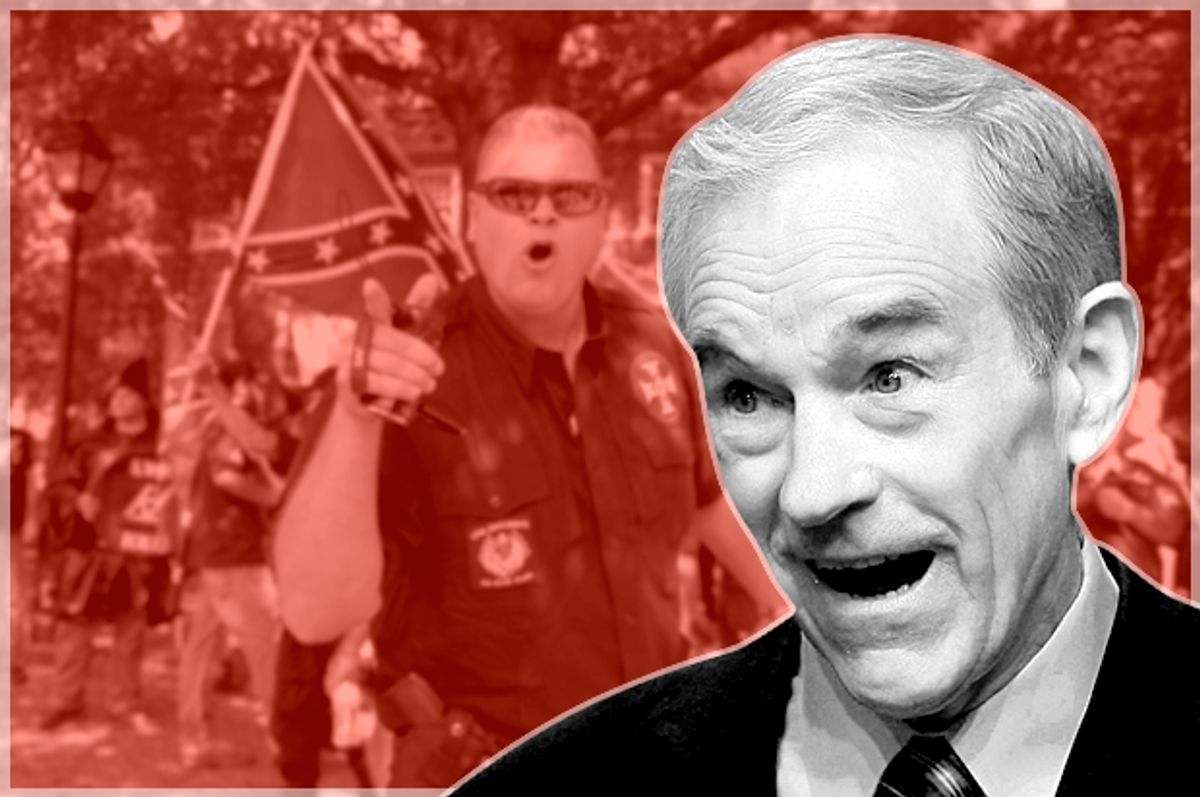 Last December as the smoke was clearing from the electoral explosion and many of us were still shell-shocked and wandering around blindly searching for emotional shelter, Salon's Matthew Sheffield wrote a series of articles about the rise of the "alt-right." The movement had been discussed during the campaign, of course. Democratic nominee Hillary Clinton even gave a big speech about it. Trump's campaign strategist and chief consigliere, Steve Bannon -- the once and future executive editor of Breitbart News -- had even bragged that his operation was the "platform" of the "alt-right" just a few months earlier. But after the election there was more interest than ever in this emerging political movement.

It's an interesting story about a group of non-interventionist right-wingers, who came together in the middle of the last decade in search of solidarity in their antipathy toward the Bush administration's wars in Iraq and Afghanistan. It was a motley group of conservatives, white nationalists and Libertarians that broke apart almost as soon as they came together. The more clever among them saw the potential for this new "brand" and began to market themselves as the "alt-right," and it eventually morphed into what it is today. The series is a good read and explains that the "alt-right" really was a discrete new movement within the far right wing and not simply a clever renaming of racist and Nazi groups.

This week, conservative writer Matt Lewis of The Daily Beast, a Trump critic, wrote a piece about the Libertarian influence on the "alt-right" and suggested that Libertarians work harder to distance themselves from this now-infamous movement. He points out that former Rep. Ron Paul's presidential campaigns were a nexus of what became "alt-right" activism. Sheffield had written about that too:

“We were all libertarians back in the day. I mean, everybody knows this,” he said on an "alt-right" podcast last month. [Note: This podcast seems to have been deleted.]

It wasn't just obscure neo-Nazi trolls. Virtually all the prominent figures in or around the "alt-right" movement, excepting sympathizers and fellow travelers like Bannon and Donald Trump himself, were Paul supporters: Richard Spencer, Paul Gottfried, Jared Taylor, Milo Yiannopoulos and Alex Jones. (The latter two deny being part of the "alt-right," but have unquestionably contributed to its rise in prominence.) Paul's online support formed the basis for what would become the online "alt-right," the beating heart of the new movement.

In fact, Ron Paul -- then a Texas congressman and the father of Sen. Rand Paul of Kentucky -- was the original "alt-right" candidate, long before Donald Trump came along. Paul was also, by far, the most popular Libertarian in America.

Those of us observing the Paul phenomenon and Libertarianism from the left always found it curious in this regard. Paul's racism was simply undeniable. It was documented for decades. He hid behind the "states' rights" argument, as pro-Confederate racists have always done, but it was never very convincing. If you are a principled Libertarian who believes in small government and inalienable individual rights, what difference does it make whether a federal or state government is the instrument of oppression?

Most of us thought a lot of Paul's appeal, especially to young white males, came down to a loathing for the uptight religious conservatism of the GOP, along with Paul's endorsement of drug legalization. That made some sense. Why would all these young dudes care about the capital gains tax?

And let's face facts, it wasn't just Libertarians who could be dazzled by Paul's iconoclasm. There were plenty of progressives drawn to his isolationist stance as well. But as it turns out, among that group of "Atlas Shrugged" fans and stoners were a whole lot of white supremacists, all of whom abandoned Ron Paul's son Rand in 2016 when Donald Trump came along and spoke directly to their hearts and minds.

Is there something about Libertarianism that attracts white supremacists? It seems unlikely, except to the extent that it was a handy way to argue against federal civil rights laws, something that both Paul père and fils endorsed during their careers, legitimizing that point of view as a Libertarian principle. (In fairness, Rand Paul has tried to pursue more progressive racial policies in recent years -- which may also have helped drive away his dad's supporters.) Other than that, though, it seems to me that Libertarianism has simply been a way station for young and angry white males as they awaited their "God Emperor," as they call Trump on the wildly popular "alt-right site," r/The_Donald.

Still, Libertarians do have something to answer for. While principled Libertarians like Cathy Young certainly condemned the racism in their ranks at the time, but others who supported Ron Paul failed to properly condemn the rank bigotry undergirding the Paul philosophy.

Lewis's Daily Beast piece certainly provoked some reaction among Libertarians. Nick Gillespie at Reason objected to the characterization of Libertarianism as a "pipeline" to the "alt-right," writing that "the alt-right — and Trumpism, too, to the extent that it has any coherence -- is an explicit rejection of foundational libertarian beliefs in 'free trade and free migration' along with experiments in living that make a mess of rigid categories that appeal to racists, sexists, protectionists, and other reactionaries." So he rejects calls to purge Libertarianism of "alt-righters," since he believes they were never really Libertarians in the first place.

Gillespie does, however, agree that Libertarian true believers should call out such people "wherever we find them espousing their anti-modern, tribalistic, anti-individualistic, and anti-freedom agenda." (It would have been easy to include "racist" in that list but, being generous, perhaps he meant it to fall under the term "tribalistic.")

Meanwhile, over at the Volokh Conspiracy, Jonathan Adler addresses some Libertarians' "misplaced affinity for the Confederacy," a phenomenon I must admit I didn't know existed. Evidently, there really are Libertarians who take the side of the secessionists, supposedly on the basis of tariffs and Abraham Lincoln's allegedly "monstrous record on civil liberties." Adler patiently explains why this is all nonsense and wrote, "Libertarianism may not be responsible for the alt-right, but it’s fair to ask whether enough libertarians have done enough to fight it within their own ranks."

Good for these prominent Libertarians for being willing to confront the currents of racism, anti-Semitism and xenophobia that at the very least have contaminated their movement. We await the same honest self-appraisal from the conservative movement and Republican leaders as a whole.