The "alt-right" wants America to believe violent radicals are on the attack; the NRA knows paranoia can sell guns 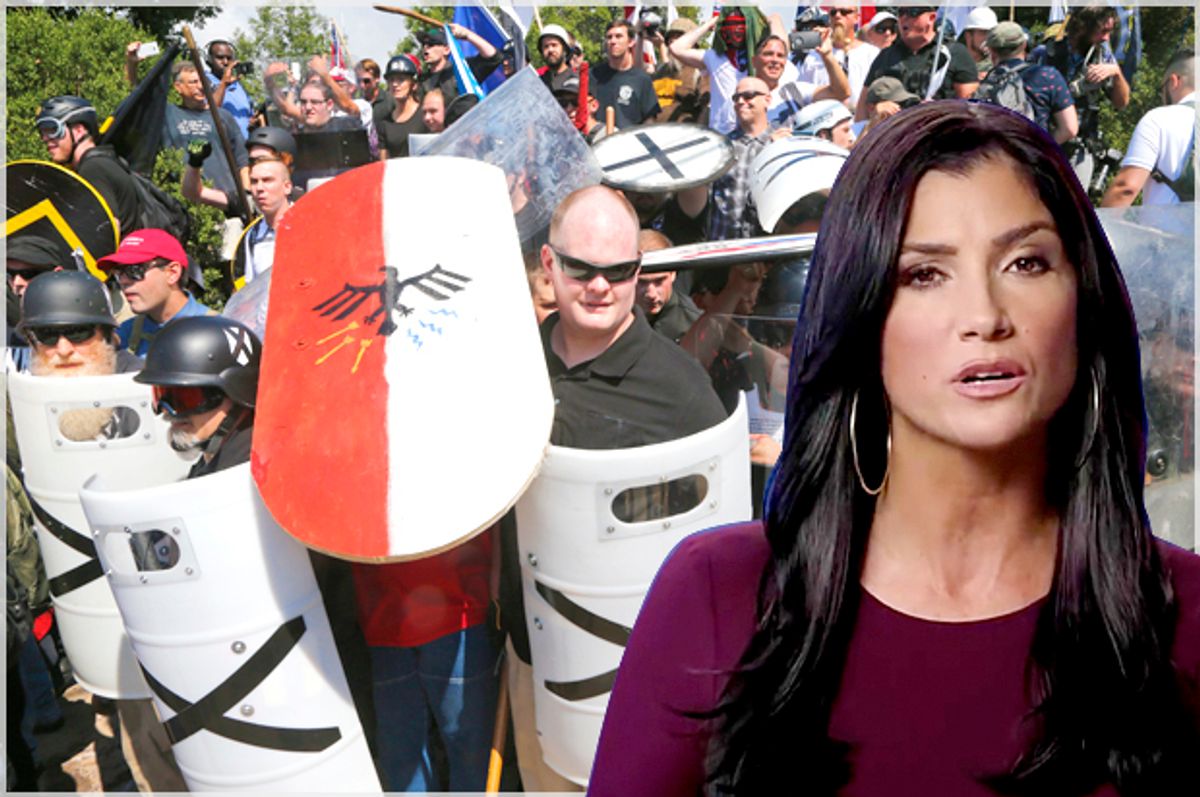 Whenever Donald Trump feels like he's on the ropes, he throws himself a rally in a red state that would make Mussolini feel envious. So it was on Tuesday night in Phoenix, when Trump — furious that the media took issue with his claim that a torch-wielding mob of white supremacists was replete with "fine people" — unleashed a 75-minute rant about his own victimization to a crowd who, despite their immense love for the Bigot-in-Chief, started getting bored and drifted away.

(To be fair, Barry Goldwater had the same problem in the early '60s: Crowds would show up, pumped about rallying with their fellow racists and then lose interest during his actual speeches.)

The highlight reel of Trump's feature-film-length whine demonstrates, yet again, that the president is echoing talking points from the same white supremacist and "alt-right" circles that he struggles to half-heartedly denounce: Monuments to the white supremacist Confederate regime are "our history and heritage," that white communities need to be "liberated" from violent immigrants, and politicized violence in the streets is being caused not by fascists, but by antifa activists who show up to resist them.

Trump's conservative audiences are disturbingly comfortable with these talking points, and that's due to a larger right-wing media infrastructure that has been pushing these notions into more mainstream conservative spaces. Earlier this week, I reported on the role that Tucker Carlson and the Daily Caller are playing in injecting more radical rhetoric into conservative discourse. But the NRA — a gun lobby that in recent years has built its own little media empire through blogs and NRATV — has also played a major role in promoting ideas that used to dwell on the fringes.

"For years, the gun lobby quietly dog-whistled to white supremacists," said Shannon Watts, the founder of Moms Demand Action for Gun Sense In America, which is part of Everytown for Gun Safety. "But as gun sales plummet under this administration, they are now openly trafficking in paranoia and fear, and inciting violence in order to advance an increasingly radical ‘more guns for anyone, anywhere’ agenda to sell more guns."

Earlier this summer, an NRA recruitment video made by spokeswoman Dana Loesch attracted considerable media attention. Loesch argued, over a backdrop of dramatic music and images of street violence, that the supposedly liberal media was whipping up mobs that "smash windows, burn cars, shut down interstates and airports, bully and terrorize the law-abiding  —  until the only option left is for police to do their jobs and stop the madness."

She went on to recommend that well-armed NRA members meet this supposed upsurge of radical violence with "the clenched fist of truth."

Loesch's video echoed the arguments of NRA CEO Wayne LaPierre, who gave a speech in February at the Conservative Political Action Conference warning about the rise of the "violent left."

“Right now, we face a gathering of forces that are willing to use violence against us,” LaPierre said. “If the violent left brings their terror to our communities, our neighborhoods or into our homes, they will be met with the resolve and the strength and the full force of American freedom in the hands of the American people. Among them and behind them are some of the most radical political elements there are. Anarchists, Marxists, communists and the whole rest of the left-wing socialist brigade.”

Remember, this was just a month after the Women's March, which was the largest demonstration in American history and which resulted in no violence, no property damage and no arrests.

These claims that there's some surge of left-wing violence that needs to be shut down by the armed vigilance of the right should be familiar to anyone who has followed the rise of the "alt-right" and the youth-oriented white supremacist movement. For months now, "alt-right" figures like Kyle "Based Stickman" Chapman have argued that violent leftists present a physical threat to "free speech" and must be met with violence. "Alt-right" social media feeds are replete with young men bragging about how they can't wait to assault left-wing protesters — or run them down with cars — all in the thinly veiled disguise of "self-defense."

This was the excuse that the neo-Nazis and other assorted racists used to justify showing up in Charlottesville with guns, shields and helmets, even though it was obvious to most of the public that they weren't acting in self-defense so much as deliberately trying to provoke street fights. It's true that these goons are sometimes met by antifa demonstrators who are ready to rumble, but as counter-protests in both Boston and Charlottesville demonstrated, violent leftists are a tiny majority and not actually a threat that can serve to justify right-wing violence.

On Monday night the president echoed these claims, calling out "antifa" by name and saying they "show up in the helmets and the black masks and they have clubs and everything." Again, this contains a grain of truth — a small number of armed, masked leftists sometimes show up at counter-protests — but the larger truth is that most progressive protesters are armed with nothing but cardboard signs. It's really the white supremacists and fascists that are showing up in large numbers with weapons, guns, shields and helmets. As the failed "alt-right" rally in Boston showed, if the far right isn't allowed to arm itself, its forces frequently won't bother to show up at all.

As Watts argued, it's not surprising to see the NRA tap into white-supremacist talking points, and not just because LaPierre and other NRA spokespeople have a long history of pushing racist fantasies in order to scare heartland white folks into buying guns. The truth of the matter is that Trump's presidency, while ideologically congenial for the gun lobby, is bad for business. In the spring, a "Trump slump" in gun sales was widely reported. The firearms industry's marketing is largely based around appealing to conservative insecurities. When Democrats are in office -- especially, say, a black president -- anxious conservatives buy more guns to feel powerful. If a Republican is in charge, conservatives feel less need to shore up their self-esteem with high-powered weaponry.

In recent months, though, gun sales started to rise again, and it's not hard to see why: Conservatives are responding to a steady drumbeat of warnings — from Trump, from right-wing media, from the NRA — that the country is under assault from criminal gangs and violent leftists, and they need to be ready.

The results of this were all too chillingly on display in Charlottesville as hundreds of white supremacists descended on the city, many of them laden down with expensive weapons. Images like this also provide effective advertising for the gun industry, as the images of gun-wielding wannabe-fascists convince other embittered right-wingers that there's an exciting movement to join, and all they need to do is lay down a credit card at the nearest gun shop.