From Yemen to Haiti and everywhere in between, the poorest citizens are punished for unknown crimes 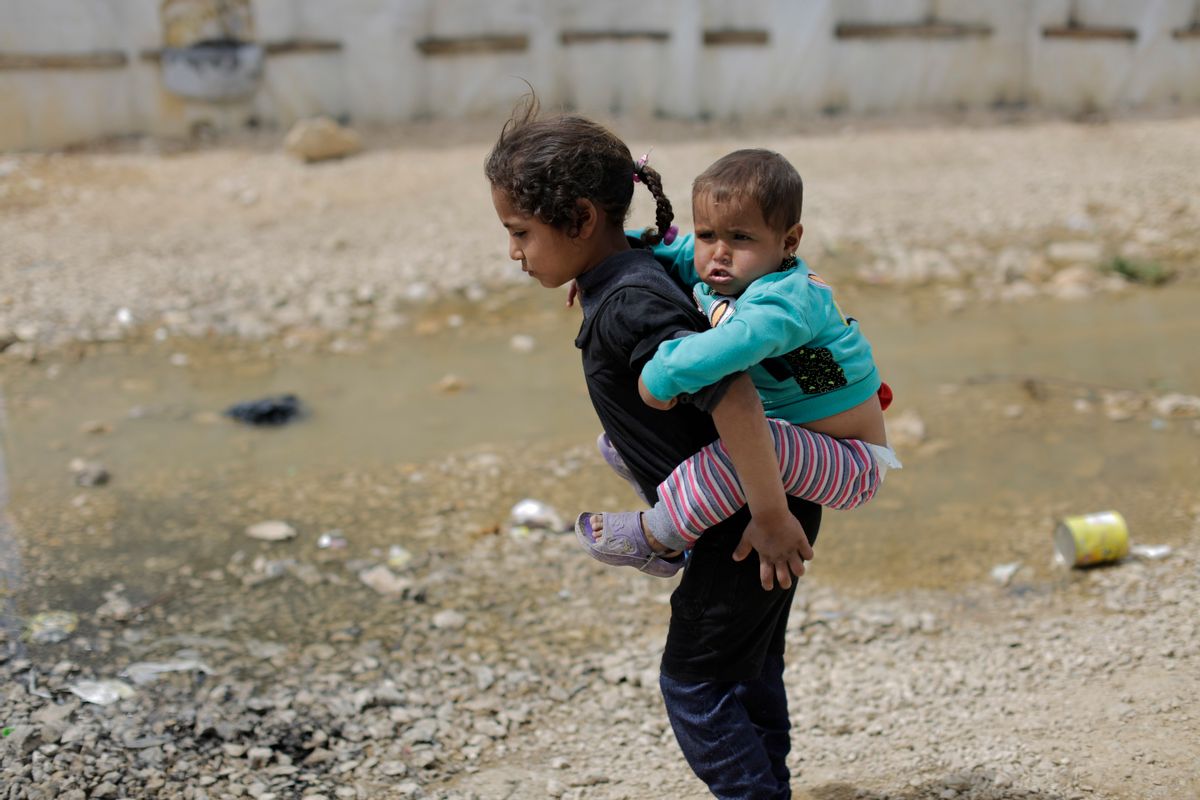 A Syrian refugee girl holds her brother as she walks at an informal refugee camp, at Al-Marj town in Bekaa valley, east Lebanon Lebanon, Saturday, April 8, 2017. For the millions of Syrian refugees scattered across camps and illegal settlements across the region, the chemical attack on a town in northern Syria and subsequent U.S. strike was a rare moment when the world briefly turned its attention to Syria, before turning away again. (AP Photo/Hassan Ammar) (AP Photo/Hassan Ammar)
--

Raoul Peck, the Haitian filmmaker, opens his new film — Der Junge Karl Marx (2017) — in the forests of Prussia. Peasants gather fallen wood. They look cold and hungry. We hear horses in the distance. The guards and the aristocrats are near. They have come to claim the right to everything in the forest. The peasants run. But they have no energy. They fall. The whips and lances of the aristocrats and the guards strike them. Some of the peasants die. Even fallen wood is not allowed to them.

Young Karl Marx, sitting in Cologne in 1842, is dismayed at the violence against the German peasants. The peasants, he wrote, know the punishment. They are being beaten, even killed. But what they do not know is the crime. For what crime are they being punished?

Peck is clever to open his film with this dilemma, for it is the question that every sensitive person should ask today. What is the crime for which the world’s poor are being punished? Poverty and war produce refugees of hunger and bombardment, but they are denied mobility, denied any exit from their predicament. They know the punishment that they face: starvation, death and indignity. This they know. What they do not know is their crime. What have they done to deserve this?

The Dominican-American writer Junot Diaz visited Haiti after the devastating earthquake of 2010. In a memorable essay titled ‘Apocalypse’, Junot Diaz noted that Haiti warned us of the new ‘zombie stage of capitalism, where entire nations are being rendered through economic alchemy into not-quite alive. In the old days, a zombie was a figure whose life and work had been captured by magical means. Old zombies were expected to work around the clock with no relief. The new zombie cannot expect work of any kind – the new zombie just waits around to die’.

And the new zombie cannot be allowed to forage for food or to seek shelter or medicine. The new zombie, truly, must just wait to die. This is the punishment. But what is the crime?

Last week, off the coast of war-torn Yemen, smugglers pushed a boat into the turbulent sea and ‘deliberately drowned’ fifty people. The phrase ‘deliberately drowned’ comes from the staff of the International Organisation of Migration (IOM), the UN’s migration relief agency. IOM teams that walked the beaches of Shabwa (Yemen) found a shallow grave that held 29 of these people - 12 Ethiopian men, 12 Ethiopian women and 5 Somali men. Others were lost at sea. The boat originally carried 180 people. The rest reached the shore by great fortune. What was striking about the IOM’s investigation is that the average age of the migrants on this boat was 16 - young people from Somalia and Ethiopia whose countries have been destroyed by economic collapse and warlordism, by the War on Terror and capitalist overfishing.

Silent catastrophe driven by drought, climate change and economic insecurity wracks Somalia. The situation is so dire that the UN’s humanitarian relief agency — OCHA — notes that there are currently 3.2 million on the verge of famine. There is little emergency food assistance available. Already 102,263 people have been treated for Severe Acute Malnutrition (SAM) — a fifty per cent increase since 2016. Exit for the people is simply not available inside Somalia, where political conflict has been unending since the 1990s when the famine of 1991 took the lives of 200,000 people.

The flow of refugees from the Horn of Africa into Yemen is unabated. Last year — despite Saudi Arabia’s brutal war on Yemen that has destroyed that country — 111,500 people crossed from Africa to Yemen’s shores. Many of them are young, desperate to come to the Gulf states in search of miserable employment. Many do not make it, including 42 Somali migrants whose boat was scuttled by a Saudi jet last March.

Emblematic in the current war against migrants is the Wall that the US President Donald Trump pledges to build on the US-Mexico border. Data from the US Customs and Border Protection as well as the IOM show that there has been a drastic drop in migration over this border between 2000 and the present. In 2000, 1.6 million migrants were stopped by the US agencies, who only stopped 400,000 people in 2016. But, during this period, deaths on the border remain static: 380 in 2000 to 322 in 2016. Already in the first few months of 2017, the IOM found 239 migrants died in the crossing.  Last month, at least ten people suffocated to death in a truck that was parked in a San Antonio (Texas) parking lot.

The people who attempt to cross the US-Mexico border are not — typically — Mexican but from Central America. The three countries that dispatch a large number of migrants northwards are Guatemala, Honduras and El Salvador. The most common public explanation for the refugee migration is that these countries are torn by gang warfare fueled by the illegal drug trade. This is of course the case, but it is not the root of the crisis. The causes should be found in the collapse of agriculture in these countries — driven largely by climate change induced drought and flash floods, extreme heat and forest fires.

The UN humanitarian agency finds that in Guatemala, Honduras and El Salvador, there are millions of people at risk of food insecurity. In Honduras alone there are two million people in this situation. They are, in other words, starving. The World Food Program points out that in Guatemala nearly half the children under five suffer from malnutrition — the highest rate in the world. As drought and climate disruption threaten agriculture, farmers shift their crops from rice and beans to biofuels and coffee - cash crops that bring income for some farmers, but that reduce the availability of food for the country. Trump’s Wall will not stop the flow of climate change refugees. It will only make their transit harder. This is why deaths at the border remain static.

Thirty million people are currently on the threshold of famine. They would like to flee towards food and away from drought, forest fires and war.

What Lula’s government did was not replicated around the world — as even the World Bank had felt should be done. The policies of the PT have been slowly reversed by the new government. No-one is talking about Zero Hunger on a global scale. Why feed zombies when they are merely waiting around to die?

Squeezed between the end of livelihood and the refusal to allow migration, the world’s poor experience punishment for a crime that is unknown. What did they do to deserve their fate? Why are they being punished when they have not committed a crime?